Nvidia CEO Jensen Huang received the distinguished lifetime achievement award by the Asian American Engineer of the Year from the Chinese Institute of Engineers (CIE) group. And in his acceptance speech, he made a rare comment beyond Nvidia’s business matters: “Racism is one flywheel we must stop.”

The comments came at the end of an acceptance speech where he thanked the group for its award, an annual gathering that recognizes outstanding Asian American scientists, engineers and role models.

In a virtual ceremony, Huang was awarded for his contributions as “a visionary and innovator in parallel computing technology that accelerates the realization of AI computing.” He also spoke of his experience as an immigrant and an Asian American.

“It is strange to accept a lifetime achievement award because I feel like I’m just getting started – and Nvidia indeed is,” Huang said. “Still, I’m grateful and deeply honored to receive this award, which I share with my colleagues at Nvidia.”

Huang pointed out he was “destined to be an engineer,” as his father was an engineer in Taiwan. His brothers were engineers, and his wife, Lori, whom he met as a sophomore at Oregon State University, is an engineer. His first job was at Advanced Micro Devices, and then he moved to LSI Logic before starting Nvidia in 1993.

I can remember the first interview I did with Jen-Hsun (now Jensen) Huang back when the company was coming out of stealth in 1995. Since 3D games on the PC didn’t exist back then, Huang described his graphics chip as the ideal “Windows accelerator.” Nvidia competed against dozens of rivals like 3DFX Interactive, and it emerged as the last standalone 3D graphics chip maker as graphics processing units (GPUs) took off. Huang saw an early opportunity to repurpose graphics chips as parallel processors for AI, and that market took off in an even bigger way than graphics for games.

“I was fortunate to have had a front-row seat at the creation of the computer industry,” Huang said, reflecting on the early days of Nvidia and the birth of GPU-accelerated computing. “We dreamed of solving grand computing challenges and even imagined that we would be a major computing company one day.”

Since the company’s first chip, scene complexity in computer graphics has increased over 25 years around 500 million times, Huang said. Moore’s Law, which predicts chip performance will double every couple of years, would have increased only 100,000 times in the same time, unaided by better chip design.

“After nearly three decades, it is gratifying to see this computing approach demonstrate astonishing results, embraced by software developers and computer makers worldwide, become an essential instrument of scientists and the engine of modern AI,” Huang said. “There has never been a more exciting time to be an engineer.”

He said the next decade will move even faster, with AI itself writing software that will be amazing. He said AI is the most powerful technology force of our time. Nvidia is now worth $458 billion on the stock market and it employs 20,000 people. 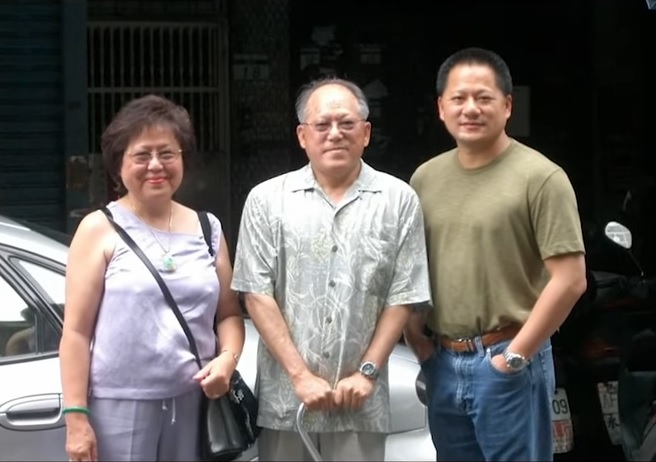 Above: Jensen Huang (right) and his parents.

Huang said he is the direct product of his mother and father’s American Dream, as they gave up everything to come to this land of opportunity as immigrants. They believed in a country ruled by laws and not bias.

“Like other immigrants, Asian Americans make up the fabric of America, have benefited from but also contributed significantly to building this great country,” he said. “Though America is not perfect, it’s hard as a first-generation immigrant not to feel a deep sense of gratitude for the opportunities she offered. I only hope America offers future generations the same opportunities she afforded me.” 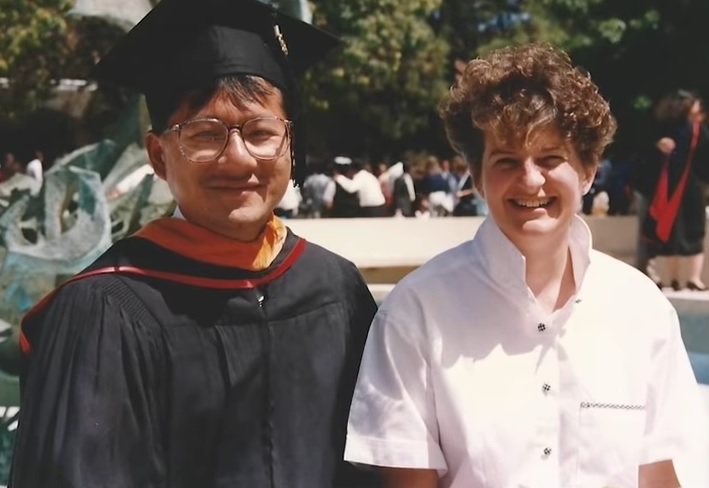 Above: Jensen Huang and his wife, Lori.

In his thanks, Huang shared his thoughts as a first-generation immigrant amid a recent rash of violent attacks on Asian Americans in the wake of the pandemic.

He added, “Racism is one flywheel we must stop. Like other immigrants, Asian Americans make up the fabric of America, have benefited from, but also have contributed significantly to building this great country.”

He noted the work of community organizations like Chinese Institute of Engineers (CIE) is vitally important in recognizing the contributions of Asian Americans.