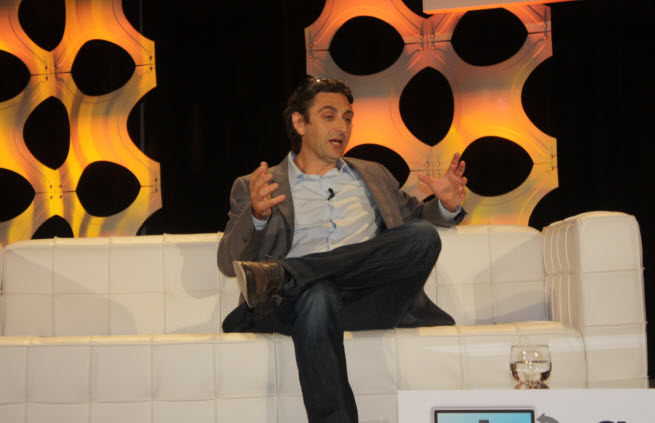 John Spinale (pictured above) is the senior vice president of social games at Disney. He’s in charge of making sure the company takes its big brands and familiar characters into the social gaming market in the right way. He runs the Playdom division, which Disney acquired for $763.2 million in 2010 to help transition older brands into the new medium of Facebook and create hit games.

Spinale joined six months ago, after a stint as the top publishing executive at cloud-gaming startup OnLive. He has had a long career in games and has seen a lot of change. Hal Halpin (pictured below right), the founder of the Entertainment Consumers Association, interviewed Spinale in a fireside chat at our GamesBeat 2012 conference. Here’s an edited transcript of Halpin’s interview with Spinale.

[How do you look at the game world?]

John Spinale: We frequently started off taking a very platform-centric view of the world, which was a great way to look at it a couple of years ago. You had console games, PC games, games for kids, games on social networks, and games on mobile platforms. More recently we started to evolve to the view of, “These platforms are actually blending into one another; they’re starting to blur the boundaries.”

Social networks are tied into consoles, consoles are tied back into the social networks, and everything’s linked to the PC. Some are open and some are closed, but they all talk together pretty nicely now. So we’re starting to take a little bit more demographic or psychographic view of who we’re making games for. It’s still kids, but core gamers are going to want deep, rich gaming experiences, while some people want to have more casual, light, intermittent gaming experiences. People largely still on mobile platforms are going to want mobile games.

I mind the store for the social games side of things: casual games for either absolute casual, inadvertent gamers — the ones who find themselves on Facebook and are not self-identified gamers — or some of the midcore gamers who are starting to flock to social platforms, as well. 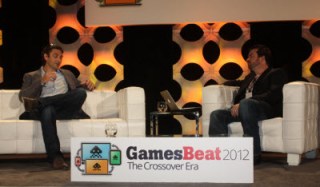 Hal Halpin: You entered the job six and a half months ago, at a time when the identity of social games was at a crossroads. Where it was a year ago, it could be identified really easily, and now it’s kind of nebulous….

Spinale: Yeah. I mean, what’s a social game? I think that’s a fair question. Starting out with games on Facebook, or games on whatever social networks used to exist — MySpace and so on — those were social games. And now most games are actually connected to those platforms. Some are exclusively on those platforms, and some run on mobile, but they talk back to Facebook. So lately what we find is that socially connected games are not purely an online experience, but the bulk of the gameplay is doing your thing and then sharing and connecting with your friends to enhance the experience. And it’s still a fuzzy line that we draw.

Halpin: Being part of Disney, you have a tremendous amount of assets, brains, characters, and IP. How do you leverage all that, and what lessons have you learned?

Spinale: Historically at Disney, we probably haven’t done the absolute best job of being a games company. We’ve started off as a film company, then television, and parks, and continued to broaden out the portfolio of things that we did. But I think games until recently were more of an afterthought. It was viewed as a marketing extension of what we did. So, “Hey, here’s a movie. How do we make the game?”

That worked okay for the company, but I think when you look at the growth in the entire games business, it’s pretty obvious that this is a big piece of the media pie that’s just going in the right direction. Disney made a decision a couple of years ago to treat games as a first-class citizen. It really is quality first and consumer experience. What do people want? And then we’ll worry about how the details play out later.

That was the mandate given to us in the games group a little while ago, and I think you’re starting to see the by-products of that just now come out in the marketplace. If you look at us in any channel right now, Disney went from “who are they?” in the games space to stealthily owning the top spot or, at least depending on what cycle we’re talking about, getting into a top 10 spot.

Halpin: How do you differentiate between Playdom and Disney? 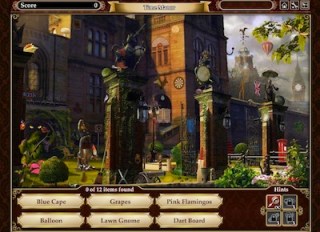 Spinale: For Playdom, we have two demographics: the casual players who wouldn’t ever call themselves a gamer but are actually playing millions of hours’ worth of games a month now, and we’ve actually started doing games for gamers as well. But again, the through-line for those two things is nobody expected to be playing games on Facebook, but they are. And once you get there, now the games market has been on Facebook for three-plus years. It’s a maturing market.

Standard things are happening to that maturing market. The expectation for quality goes up. It all started with text-based RPGs, where people were just chattering back and forth. You could make a game in a month or two. We had this horrible thing going on where we were cloning each other, and every company was coming out with its own derivative of whatever game the other guy had made a month before. It was pretty awful.

I think it was a bad experience for consumers. They didn’t know what was what, what was good, or what was bad. It didn’t really matter. I think the good thing for our market now is — especially being part of the Disney family — our mandate has been to make great products. Do that first, and when it’s appropriate, borrow from the Disney brands that we have around the table, whether it’s Marvel, Pixar, or an animated film. Or not, and create new brands, and actually feed those back into the pile of Disney intellectual property that we have. With that mandate, we’re very much out of the space of trying to keep up with the Joneses. It allows us to do things that are innovative.

So, for example, in Gardens of Time, which is a social game on Facebook, what we did is take the concept of these hidden object games, which existed in the casual download space, pulled that into the social network space, and took something that was inherently a solo activity [and] turned it into a social activity. It had a really nice, cohesive product with characters, stories they could care about, and experiences that they could keep coming back to. Figure out how to monetize it in the free-to-play world. We did that on our own. There was nothing else out there in the market like that. It gives us the space to innovate and do things that are very relevant to consumers.

The same thing with Avengers Alliance, which was a game on Facebook for the more hardcore boys audience. We knew there would be an Avengers movie coming out at some point. It’s a very big franchise in the world of Marvel. We had these characters, and we thought we could come up with a great storyline and backstory that was exciting. Instead of making a movie tie-in, we kind of turned that upside down and said, “Let’s actually make a game first, in the same time frame, that will be relevant to the movie audience. But it’s also completely independent.” 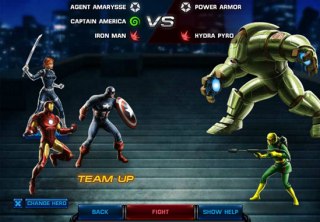 We came up with the game earlier this year — four or five months before the movie launched — and we were able to build an audience on our own of 8 million players who were playing up until the time the movie came online. And that gave us the opportunity to start collaborating with the studios and Marvel, rather than just trying to hit their movie launch dates. The game was in development for two years. We had all the time and energy we wanted to make it a successful product in its own genre, and that’s an opportunity that we wouldn’t really get unless we were integrated into Disney.

Halpin: A few questions about tapping into your past and perspective…. You were there during the Eidos Lara Croft heyday. Where do you think the franchise is now, how to capitalize on it, and have they improved?

Spinale: In my career, I’ve been lucky enough to touch some really interesting intellectual properties at almost every company I’ve worked at. One of my previous employers was Crystal Dynamics at Eidos, which is now part of Square Enix. We built and grew Tomb Raider and Lara Croft, the intellectual property and character, that was turned into films and games. I was lucky enough to be the steward of that for a little while.

I think like many franchises, we learned the lesson that if you don’t make great games first and foremost, your audience will find other ones. You can have great characters and great stories, but in the game media world, you have to make great games. We strayed from that path. We put out some products that were average at best, and we were punished. We more or less had to sit out the PlayStation 2 era and start back up in the PS3 era.

What we saw at E3 looks great. I’m completely divorced from it, so now I’m all objective, but I think they’ve done a great thing. They focused back on making a great game, got away from the jiggling body parts, and turned it into a really exciting version of what it was known for originally: great stories, great characters, and really great gameplay that actually leverages physics and puzzles in the way that modern games can.