Jon “Neverdie” Jacobs has done some crazy things, like running for “President of Virtual Reality” and buying a virtual asteroid for $100,000 in real money in the online game Entropia Universe. Now, his Neverdie company is trying to raise a ton of money via the Ethereum cryptocurrency through an initial coin offering (ICO) so that he can build cross-platform online game avatars. It may seem far out, but he has already raised more than $2.1 million from backers.

Like Bitcoin, Ethereum is a cryptocurrency that creates an immutable and transparent ledger, which is distributed across a lot of computers in what is called a blockchain. It creates secure transactions, and it enables developers to build software programs on top of it. Entrepreneurs can raise money through Ethereum by staging ICOs, and Neverdie wants to use his money to enable much better online games.

Jacobs created his Neverdie identity, or avatar, in many different worlds. But he wants to be able to take his avatar across a bunch of virtual worlds. So, he is creating a Neverdie Teleportation ICO. He wants to create virtual tokens that you can use to transport your avatar from one world to another. By giving players the ability to move from one world to another, Neverdie believes players will be liberated and be able to engage in much more commerce than they currently do. And Ethereum could provide the cross-platform currency that greases the skids of this new economy.

And here’s another twist. Jacobs believes that artificial intelligence advances will destroy a lot of jobs in the coming years. He thinks Neverdie can create a lot of jobs by using the tokens and giving them to people for playing games. Yes, he believes in paying people to play games, using the proceeds of the Ethereum ICO. Jacobs thinks this will create a lot of jobs to offset those lost to AI.

It’s an ambitious plan by Jacobs, who operates the Rocktropia virtual world, where this model of paying people to play games has already been tested. I heard Jacobs talk about this plan at the Gamelab event in Barcelona. He is also speaking at the CoinAgenda Europe event in Barcelona this week. I interviewed Jacobs after his Gamelab talk. Here’s an edited transcript of our interview.

Above: You can buy Neverdie tokens with Ethereum.

GamesBeat: You’ve already raised quite a bit through pre-sales, and then, you’re targeting a very large amount?

Jon “Neverdie” Jacobs: The idea is, we started about two and a half weeks ago, basically the moment we had the site up and the exchange mechanism in. We started selling the coins. Also, we were giving some of our existing players from Rocktropia coins, so they can vote in the Rocktropia elections. It started off gradually, but we got one $50,000 investor very fast, not anybody we knew. That started to fund our marketing for the ICO.

GamesBeat: I need to back up a bit and understand this all.

Neverdie: Here’s the thing. I don’t know if you follow what I’ve been doing for the last couple of years. I ran for president of virtual reality, which is kind of an out-there thing. But the reason I did it was because, with my experience, I’m seeing that unless we connect virtual worlds and massively multiplayer online role-playing games [MMORPGs], we’re not getting value out of it. Players aren’t getting enough value. They’re not growing. Everyone is stuck at a certain level of growth.

In addition, in Entropia specifically, the players need to get more involved in the direction of it. All they’re doing now is complaining. I wanted to hand over — to create a democracy, as much as possible, so they can be actively engaged. They have money tied up in it. It’s not just a game. This is their assets.

I put myself out there for that purpose and also because VR was booming. I thought, “These guys don’t even know the mistakes they’re making. We’ve been making them, but nobody’s listening to us.” That was the point. Then, my means to do that is — OK, we could do it with a teleportation system. If you think about it from a theory point of view, if you could just teleport between worlds, that would make it work. That became the basis of how I was going to achieve it.

I felt like I could create jobs at the same time because there’s a way to twist the business model of games to include actually paying people. A lot of games, like in Entropia — we give away a lot of freebies to get people started, but when you cut that off, you lose a lot of people. You could just take a section of your revenues and say, “If you want jobs, here you go.” It helps support the economy. Because the jobs being lost to AI and the like, it fits with the challenges of the world. I wanted to make what we’re doing more relevant to what’s happening in the world.

Anyway, I came up with this system but didn’t have a means to implement it. Ironically, or strangely enough, the whole ethos of Ethereum is creating smart contracts on the blockchain. They’re called smart contracts because they’re transparent. You can see how they work. You have these transparent contracts that can actually be a constitution of a country. Then, token holders can vote, and it’s all written into the contract. There’s no way to change the rules.

Then, the challenge is, we’ve got the tokens. I can make enough that would work for all the world. I can make enough and come up with a business plan that would make sense for people to finance the ICO. Then, all I need is [applications programming interfaces] and [software development kits] to connect it to the various gaming engines and create the balancing for the cost of death and teleportation in worlds. Bang, we have it: a decentralized teleportation financial system. Whoever opts in is then supporting the growth of an interoperable economy.

Ethereum gave me the solution. It also was completely in line with what we need, what I felt like virtual worlds need, in order to — and not just virtual worlds. All the gaming platforms people operate on, whether it’s mobile or iOS or whatever, the markets are saturated. You have to keep looking for new platforms. This is a new platform. We were able to gamify these tokens instantly by creating skill points, skill tokens, hit point tokens. There are so many ways. It’s amazing because you suddenly don’t have to build your own database. It’s peer to peer, the ledger, on the blockchain. It’s a remarkable new platform.

It’s almost like everything I spent the last year and a half raving about like a loony — now, I could put it together. Coming here, for example, I would have been — let’s say, had I not gotten as much financial support as I have in the last few days, it’d still be like, “OK….” A lot of it’s coming from Korea, which is a huge gaming community, as well as crypto.

There’s obviously a real — it’s more than just me. And that’s not the full amount. That’s just that account. 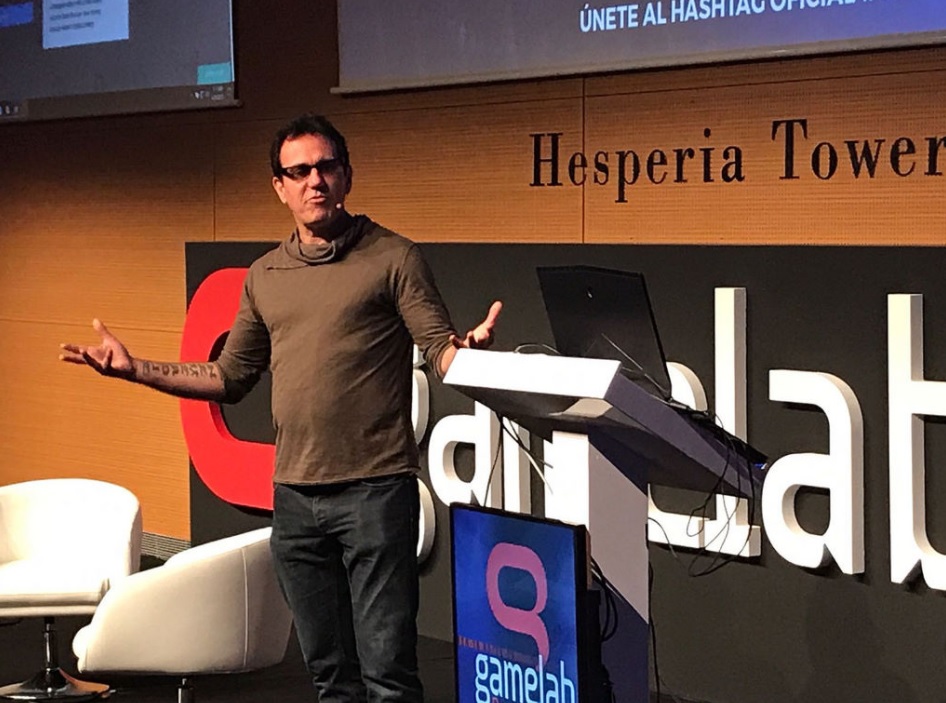 Above: Jon “Neverdie” Jacobs ran for president of virtual reality.

GamesBeat: What do you want to do with this money?

Neverdie: The first thing is to create the applications programming interface [API] and the software development kit [SDK] and the wallet in order for people to be able to gamify their experience of being on the blockchain. That’s where the initial raise money goes. Obviously, it goes through the roof. It expands upon that, and we can start development for certain games. But the biggest use, my key — this is the play.

The teleport token, I made 10 billion of them. Which is not a ridiculous number because if all the games where everybody’s hopping around — you can imagine there might be hundreds of millions of hops a day. How many people die each day in video games? These are the infrastructure points of games, the common points. With the teleport token, at the price we’re selling the coin, initially it’s 10 cents. The moment we close the ICO, we have a billion-dollar valuation. If everyone buys them at 10 cents, that gives us our billion-dollar valuation on the total circulation of coins. With the Neverdie coin, we set it initially at 100 million, but it’s undervalued compared to the teleport token.

Once the trading begins on the exchanges — everybody who’s buying the coins can’t wait to trade in them. Judging by what we’ve seen in other coin launches, that could very quickly go to a dollar for the teleport. Suddenly, we have a $10 billion market cap on virtual reality transport. That sounds far-fetched, but here’s the thing: I’ve not sold a lot of the coins. The majority of the coins are reserved for funds.

One fund is the loot pool. Let’s say once it gets to 10 billion, just to make it sexy, we have 15 percent of the unsold coins in a loot pool. That’s $1.5 billion we can use to underwrite the value of virtual goods in opt-in games and worlds. Just intrinsic core value. They’ll have their own market value based on their use in the game. We’ll have a $1.5 billion fund for jobs, where we’re paying $10–$15 a month. That helps people get into the economy from all walks of life, all revenue streams, all countries — some of them from countries with minimum wages that are 10 cents an hour. We can let them all into this global virtual goods economy.

Another fund is the game development fund. We have that $1.5 billion. Everybody who’s a token holder gets to vote on how that’s released and to whom. We get a democratic funding of new content for the system. People don’t have to pay for it. It’s already in the market value. Then, we have a small portion — let’s say 10 percent — that goes to the VR government. That’s for starting organizations to protect avatar rights in this digital economy. Really just organize the infrastructure, the voting mechanisms, community management. There’s also some funds to deal directly with the real world, so this economy is helping people in the real world, lifting people out of poverty, delivering computers to villages, all kinds of stuff like that. Investing in exponential technology that could potentially impact the future of this economy. Once it’s alive, everyone is going to care about it.