Jonathan Blow and his team at Thekla took more than seven years to make The Witness. It was a small indie project, but the long puzzle game made a big impact, cementing Blow’s reputation for doing outstanding work.

But now, the creator of Braid and The Witness has moved on to some other projects. He’s working on ways to make programming less painful for game developers. He is doing that by creating a new programming language as a replacement for the popular C++ language.

And he’s working on at least two new games that use this new programming language. Each game has more than 25 hours of gameplay already, but it will be a while before they hit the market. In fact, one of the titles will come out in episodic form, and Blow reiterated that it will take as long as 20 years to complete.

He’s also proceeding with previously announced plans to invest in games as an angel investor. Blow gave a talk on programming at the the Gamelab event in Barcelona. Robert Purchese of Eurogamer (who asked the majority of the questions), and I interviewed Blow during a break at Gamelab. Here’s an edited transcript of our conversation. 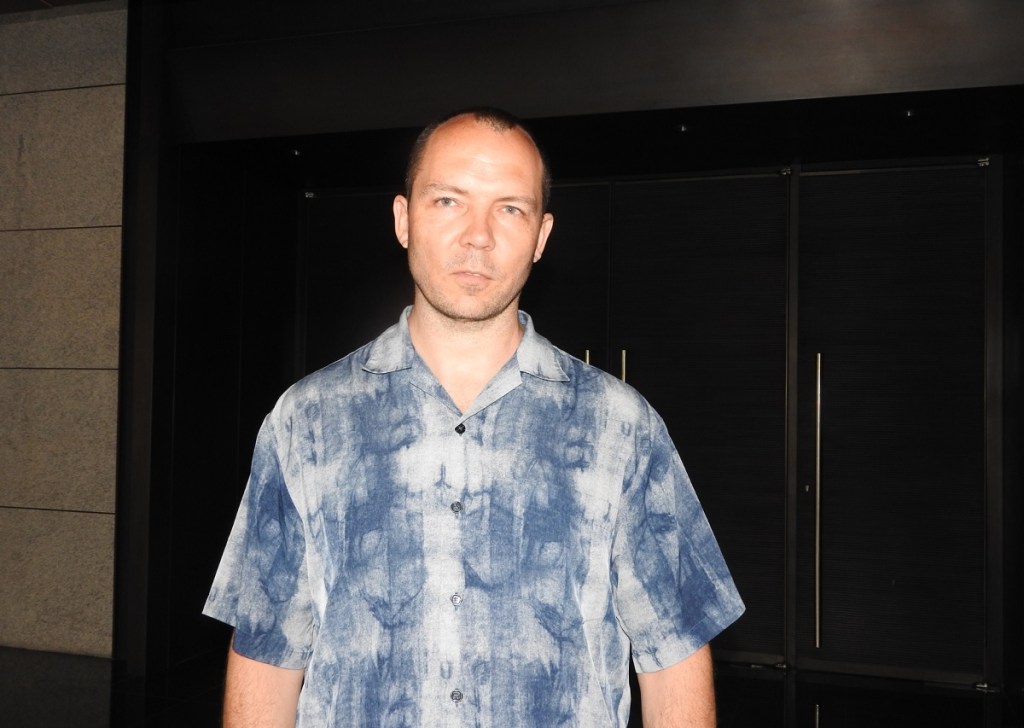 Above: Jonathan Blow of Thekla spoke at Gamelab 2018 in Barcelona.

Question: I was curious about your new game and how it’s getting on. I was at Reboot when you also showed it.

Question: The clip of the game shown at Reboot this year looked exciting. At the time, you said, “This is not representative of how it looks visually, but we’ve built about 25 hours of gameplay.” How is that developing?

Blow: Well, we’ve built a lot more gameplay. We haven’t really officially announced the game yet, so I don’t want to say too much about it, but we’ve shown it in these talks. It’s weird. It’s a level-based game. There’s a lot of levels. We have a lot more levels than we had last year, so there’s correspondingly a lot more gameplay there.

We’re working on the graphics engine right now because we’re building a new engine from the ground up. We have to. We spent seven years making a game engine that we shipped with The Witness, but then, this new thing is in a new programming language, so we can’t directly use that engine.

Question: That was what your talk was about at Reboot.

Blow: Yeah, yeah. The talk today was similar to that one, but it’s the one-year-later version. Things have gone well, but — we’ve been slowly building up this new engine by translating things from the Witness engine, mostly, and sometimes writing things from scratch. It’s a lot of work. Games are a lot of work, it turns out. We’re just doing all that work.

Question: How many people are making the game?

Blow: On this particular game, the team is — well, the programming team is small. It’s just two programmers, me and one other person. I’m also working on the language that the game is in, so I’m a bit diluted. The art team working on this game is about five people right now.

Question: What we saw of the game was a character pushing around blocks.

Question: That art style, is that the game? Is that what we’ll play?

Blow: Well — I think if you just looked at that, what we showed last year, you would get a far too simple impression of what the game is. We haven’t announced exactly what it is. The idea behind it is, I think, very exciting. But I can’t really say yet. As to the visuals, the general style of what we showed last year was correct, but again, they were very early visuals. This year, we showed something more developed that looked nicer. It’s a similar level but more elaborate. As we improve the rendering quality of the new engine, the levels will look nicer as well.

But we’re at the point in development right now where we’ve pretty much pinned down what the art style is, finally. What you saw last year was an early idea about the art style. 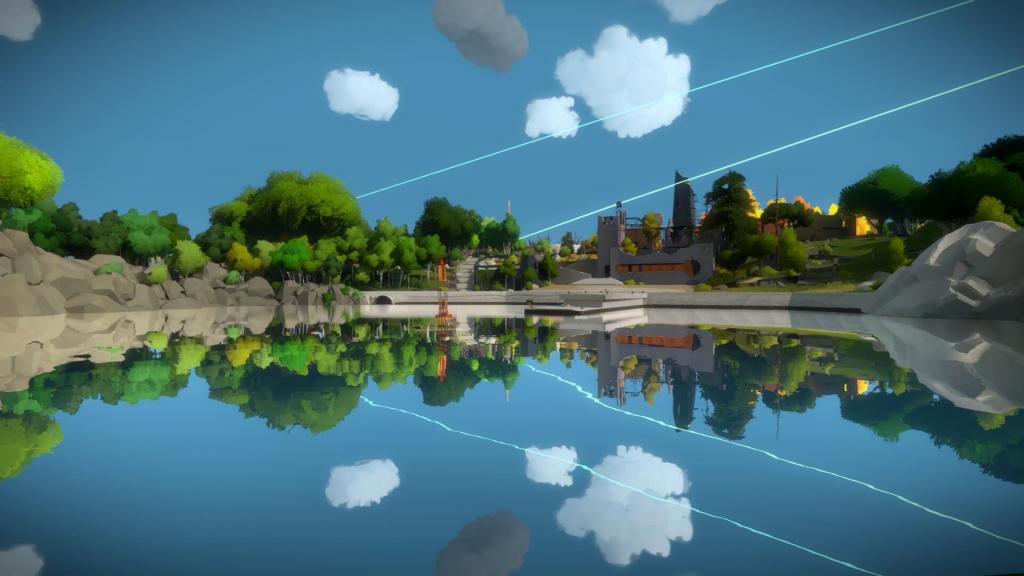 Above: The harbor by the Town Square in The Witness.

Question: But it’s not going to be drastically different?

Question: What you were saying about only seeing a small part of it, to try to understand that, is it like seeing an early level of Braid, where you haven’t gotten to all the mechanics?

Blow: Yeah, except it’s even more basic than that. If you just see a guy pushing blocks around, it sounds like a very generic puzzle game. With Braid, you’d at least realize you have rewind like Prince of Persia. It’s a little bit uncommon. A game where you push blocks around doesn’t sound very exciting. There’s a lot more to it.

Question: How far through development is it?

Blow: It’s always hard to schedule games like that, the way that I do it. We don’t do it like Electronic Arts. We don’t pick a quarter and ship the game. We’re just trying to make the best game. When it’s kind of close to done, then we know. With The Witness, we announced the release date as soon as I knew what it was, which was five months before release, out of a six-and-a-half year development. That hurt us. If I had known the release date sooner, we could have gotten a very good publishing and retail deal. We didn’t because retail people need to know when the game is going to be there in advance. But we made a good game.

With this game, it’s even harder than usual because it’s in this experimental programming language. I really can’t say yet. I can’t even tell you when we’ll officially announce it. Probably closer to release than we have in the past because the current game environment — we used to announce stuff really early and people would look forward to it. Now, it’s so noisy out there. Maybe once it’s mostly playable and we know a release date, we might do the full thing. 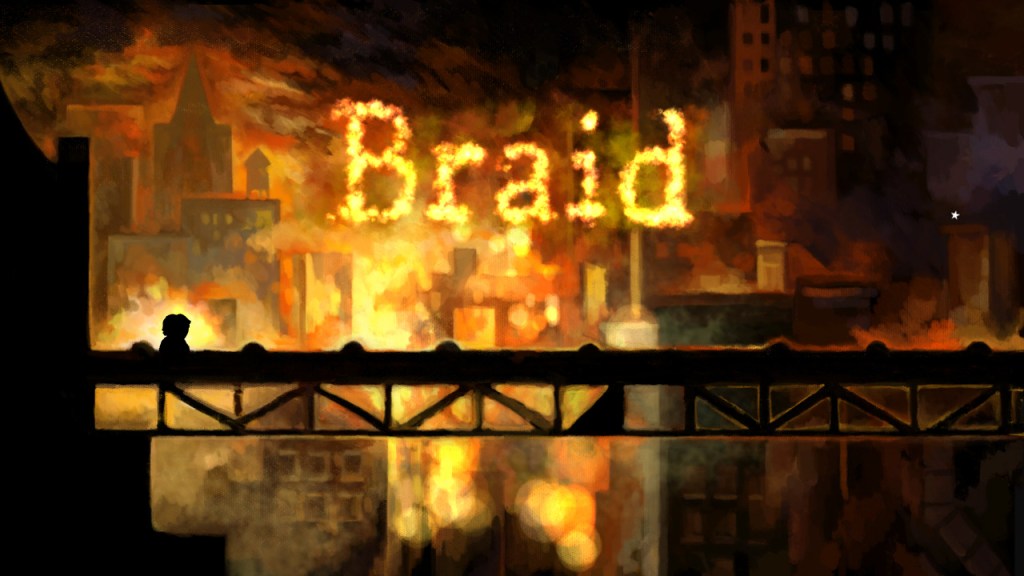 Question: Were you serious when you said you’re going to work on it for 20 years?

Blow: That’s a different game. That game is something I started in 2012 or 2013. That also has 40 to 50 hours of playable gameplay in a prototype, but it’s a different 40 to 50 hours. That game, what I decided is I want to rewrite it in the new language because I’m going to work on it for that long. And it wouldn’t be that long on one release. It would be installments. Not really episodic but installments and elaborations on the same game over the course of 20 years, making it bigger and bigger and more complex.

That’s a very exciting project, but I said, “OK, if I’m gonna work on it that long, I want it to be in the new language because I want to enjoy working on it.” This game is sort of building up the engine, and then, we’ll take that new engine and use it on that 20-year game.

Blow: Oh, yes. When games are this hard to make, you have to plan it out and make sure that everything is utilized.

Question: I was also curious about the investments in other developers. Is that moving ahead as well?

Blow: Oh, yeah, there’s a bunch. We were talking about this the other day. With Indie Fund, we don’t really announce investments that much anymore. Mainly, again, because there’s so much noise. It really used to help a developer if we announced that we were funding them. Now, nobody cares because there’s so many ways games can get funded. Sometimes, we just announce things and toss them out there and nobody cares.

Question: Is there a style you figured out, though, for how you want to invest and what to fund?

Blow: No? Here’s the thing. When this fund started, it was a closed fund with seven investors, and we all voted on what to fund. As often happens, we discovered over time that we all have different ideas about what we want to support. We later evolved it anyway into something that works. It’s a bit more like — it’s not exactly Angel List, but it’s a bit like that, where there’s a more loose group of people, and what happens is, one of us will want to lead an investment. We take it to the list, and whoever’s interested will invest. Different people are interested in different kinds of games.

Question: They can opt in or opt out?

Blow: Yeah, it’s totally a la carte. Before it was a monolithic fund. Even if you voted no on this game, you’re investing in this game. That caused a bit of strife. Now, whoever wants to puts money in. That works now. It wouldn’t work before because there weren’t that many successful independent developers with money to throw around to support other developers. Now, there are because there have been so many successful games. Tons of people want to put money into games. 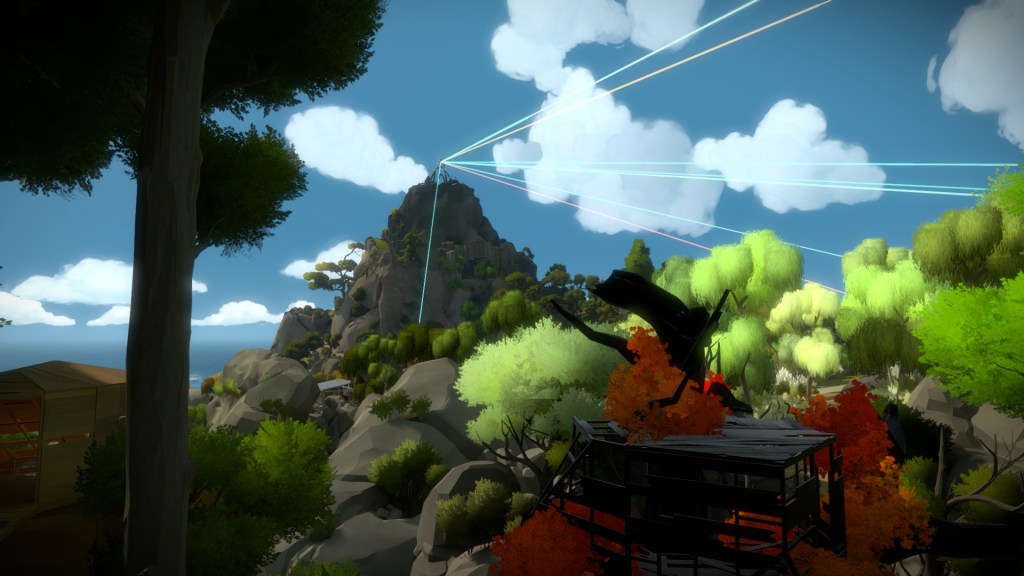 Question: Do you still feel there’s a good reason for you to do this?

Blow: Yeah, I think it still fills a need. It’s weird. We started the original fund before Kickstarter, for example. Then, Kickstarter came out, and it seemed like maybe we didn’t need to do it anymore. But now, it’s hard to get money from Kickstarter again. Even if you do, you may regret it because you have to do all this work. There are publisher deals that are more amenable to indies. That didn’t exist back then, either. But then, what if you can’t convince a publisher? What if you have a smaller game that they’re not interested in? What if you just don’t like the deal?

There’s definitely still a role. It’s not as central. We used to sort of be the only game in town. Now, there’s plenty of options everywhere. That’s good. It’s a good development.

Question: Now that The Witness is available on phones, which is incredible, what are the chances of seeing it on the Switch?

Blow: I wouldn’t say never, but we worked on that game for a long time. We could have done more ports, but I felt like it was a good idea to give the team a break and work on some new things. We’re working on new projects now. We’re not really working on ports of The Witness, but that could change. Something could happen. We could outsource it and quality control in-house. But we’re not currently doing anything.