If you only caught Spike’s annual Video Game Awards on television, you may have noticed that the whole thing was pretty light on actual awards. That’s because Spike handed out many of the trophies before the actual broadcast started. One of those winners, Journey composer Austin Wintory, won Best Original Score without any warning while walking into the theater. “I was fully anticipating losing,” said Wintory. “I thought Jack Wall, the composer of [Call of Duty] Black Ops II would win. I saw him on the red carpet and told him that I was 100 percent sure I was going to lose to him.”

That’s not how it went down. In fact, Wintory quickly found out that the opposite was true. “It was really surprising to not only win, but to win two minutes after having that conversation with Jack while still on the red carpet.” 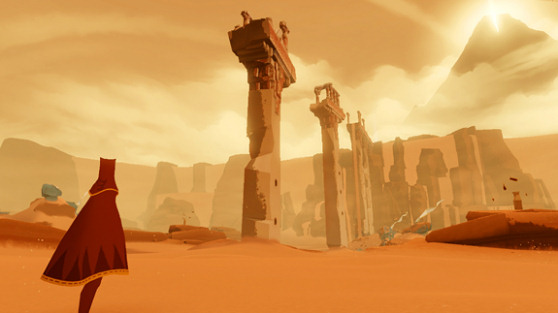 If you saw it happen — the preshow streamed live online and on Xbox Live — Wintory seemed flustered, but that was just due to spontaneity of it all. “I know they have a lot of trailers as part of their show,” said Wintory. “They’re putting on a full production that’s almost like an industry event, so I had anticipated that my category wouldn’t be part of the telecast — it’s not a sexy category like Game of the Year is — but I didn’t expect to get it on the red carpet.”

Wintory believes that Justine Ezarik, who presented him the award, was just as confused about everything as he was.

“I think they may have told her in that moment,” said Wintory. “We were both like: ‘Something is happening!'”

But the musician, who is working on the score for the next Leisure Suit Larry, didn’t mind getting his award in a rush before the show even started. “It was fun. It was all in the spirit of the VGAs,” said Wintory. “This was perfectly in line with [the big spectacle of it all]. I’ve had people ask me if it pissed me off, and I’m like, ‘Wait, you’re asking me if I’m pissed off to win an award?'”

The Journey soundtrack is up for a Grammy in the Best Score Soundtrack for Visual Media.  When that show airs in February, it’s unlikely that whoever wins that award will find out from Joan Rivers on the red carpet.