No matter how polished your hardcore platformer is, people won’t play it if they feel it’s more difficult than fun.

That kind of barrier kept many from experiencing the likes of Super Meat Boy and Dust Force, and it’s exactly what the indie developers at TreeFortress are trying to develop around. Their retro-influenced action-platformer JumpJet Rex (out in Early Access today for PC, iOS, and Linux, with a full release expected March 1) contains many in-game methods for players to create their own difficulty, providing a challenging adventure for more adept gamers while easing in newer players. I recently sat down with the developers for an extended preview of an early version, seeing these gameplay buffers in action.

JumpJet Rex casts you in the role of the titular, rocket boot-wearing dinosaur, who must travel through the galaxy and time itself to save his species from its meteoric doom. Between you and extinction lies dozens of laser-grids, evil patrolling robots, and a handful of devious boss encounters. But you do have options in case you find yourself almost ready to give up on the mission. 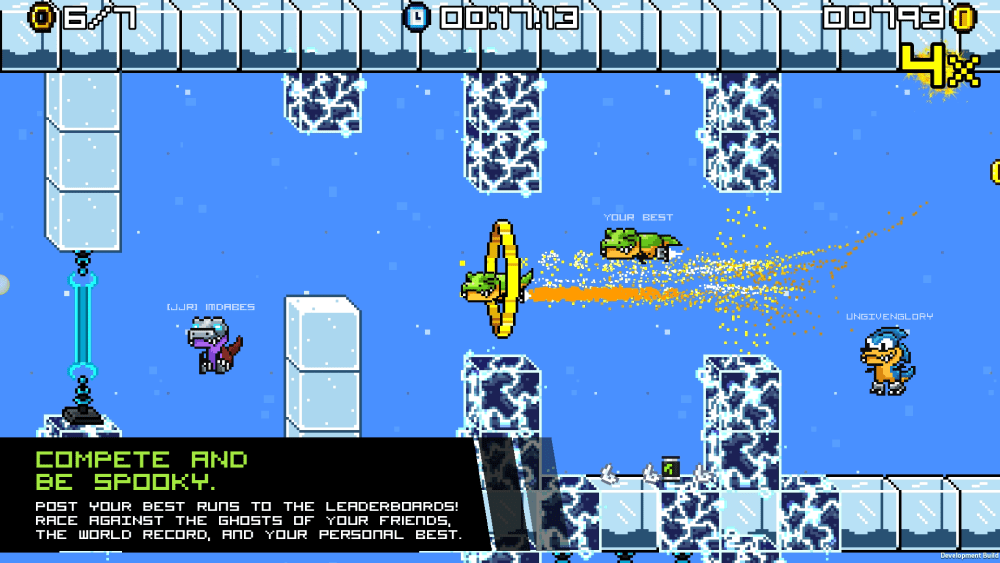 Above: Watching the successes of the world’s best players could help you determine the best to success on a tricky level.

The first newcomer technique is to load up a few ghosts, or previously recorded run-throughs of a level by other players or computer A.I. If a drop down a spike-filled corridor killed your Rex more times than is acceptable, you can get a sense of strategy for the timing and pivoting requiring to move on by watching these transparent, record-setting Rexes run through the level. The top of your friends’ list and global leaderboards then become a real-time strategy guide for the toughest moments.

Dying itself can be a newcomer strategy, if used properly. Like its hardcore forebears, JumpJet Rex has a near-instant respawn rate, popping Rex back to the start of a level should some fry or blow up the little guy. Unlike JumpJet’s genre ancestors, levels don’t entirely reset with you. You keep coins and gold rings you’ve collected, and any destructible part of the stage remains obliterated until you pass the goal line.

Beginning players could then invest in a kamikaze dinosaur strategy, triggering and taking out tricky portions of a stage before reviving and walking right through them. This same technique takes some of the sting out of boss battles as well. Players can whittle down their massive opponent’s health over the course of as many lives as necessary to take them out, rather than starting from the top of the boss’s health bar with each respawn. 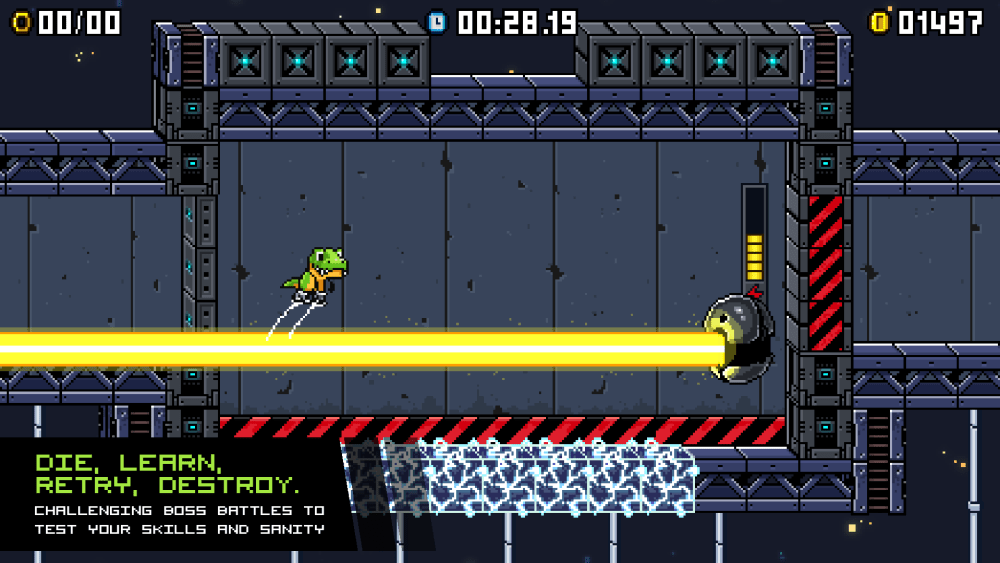 Above: Boss characters can be tackled head on, or slowly chipped away at with multiple respawns.

But TreeFortress didn’t leave out players that want the steepest challenge. If merely completing each level is too plebeian a task for your skills, each stage grants an additional star for beating it without dying or under a certain time. Challenge rooms and hidden collectibles are also littered across the map, granting even more gold coins for which to buy aesthetic upgrades. You’ll be able to tell the best JumpJet Rex players by the amount of different heads they can switch out for Rex and how many decorations litter their home base.

Beating JumpJet Rex once also unlocks some ridiculous challenges. The developers even hinted at the most hardcore of modes, which teases the most skilled players to complete the entire game (without checkpoints) on only three lives. And it sounds like TreeFortress will need these extra challenges; beta players decimated the stduio’s best level times in minutes.

JumpJet Rex is a hardcore action-platformer that doesn’t want you to hold that against it. The core game is challenging but forgiving, allowing players to progress mostly with just the stars gotten from completely the stage however possible. For those that get stuck, watching ghost replays and gradually wearing down boss health could provide the boost needed before keyboards get broken in anger. And players with a bit more skill have optional challenge rooms and insane modes to prove themselves on. Rex could be the hardcore game that all players could beat, some with a more suicidal strategy than others.