Most shooters are serious games. And they don’t come with super-fast grappling hooks, wingsuits, and parachutes. But that’s what you’ll find in the goofy Just Cause 3, just because it’s fun.

We caught up with the unapologetic creators of Just Cause 3, which is coming out Dec. 1 on the PlayStation 4, Xbox One, and PC. Christofer Sundberg, the chief executive of developer Avalanche Studios, and game director Roland Lesterlin talked to us about Just Cause 3 at a hands-on preview event staged by the game’s publisher, Square Enix.

Just Cause 2 sold more than 6 million copies thanks in part to a modding community that added features such as multiplayer. The new game takes place in an open world landscape in the Mediterranean.

Here’s our edited interview with them.

GamesBeat: What’s the ambition you had with Just Cause 3? What did you want to do with this new version?

Roland Lesterlin: When I first came on board, I was a huge Just Cause 2 fan to start with. That always helps when you’re coming on. To be offered the opportunity to build what is basically the game that has built up Avalanche Studios — it’s been with Avalanche for 13 years or so now.

Coming in, I wanted to make sure that we didn’t mess up the great things that were in Just Cause 2. I wanted to keep that joy and humor, to bring that up and use the power of the new systems to make it bigger. More explosions, more grapples. Trying to add a more vertical feel to it so you could get up in the air. We wanted to redo the parachute and create a very stable platform for combat there. That gave us space to put in the wing suit, which lets you traverse through the world.

GamesBeat: Where did you get some of those vertical ideas? Did someone just start drawing a wing suit one day?

Lesterlin: A little of that. Some of it was, Christofer and I sat down when we started, and I made a list of all the things I loved about the game. Of course, we have a talented team full of amazing designers and tech guys. A lot of times, an idea sounds good on paper, but in practice it isn’t as good. The talent we have on the team allows a lot of these ideas to come to life. Then it’s about polish, perfecting how it’s going to work, how it’s going to feel, how the camera follows it, what visual effects come with it. All that has to marry together to create these features.

Christofer Sundberg: It’s a whole new team on the game. When we came out of JC2, we put a lot of people to work doing the game you saw earlier today. For me, it felt like the game needed some fresh eyes on it. We decided to have a new team take a new look at the franchise. 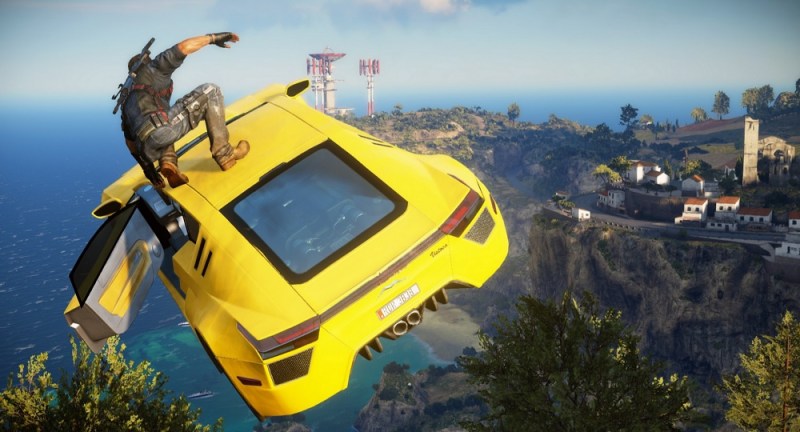 Above: You can parachute from a car after you drive it off a cliff in Just Cause 3.

GamesBeat: The movement is very fluid. You never have to stop moving or doing something.

Lesterlin: I keep trying to get people to call it “flow motion.” That idea of never having to stop. Or “Trifecta of Traversal”? We can come up with all the fun buzzwords for it. But that was a big idea. Just Cause 2 was so good at the immediacy of it. Trying to marry really beautiful animation that feels weighty and real with that ultimate responsiveness. Every time I hit a button, I get a reaction.

That’s more than just Rico. That goes throughout the whole world. We want the world to feel reactive. When you wingsuit by a farmer in the field, he’ll look up and stare at you. You get that feeling that the world isn’t ignoring you. You’re a key part of it. We want to make it fun to just move around the world. The world is so big. That’s a key piece, to have as much fun as possible just moving around.

Sundberg: In the two previous games, the world was the strongest character. It still is a strong character. In this game, we’ve chosen to add more background to Rico. We feel like we owe it to him, after what he survived in two games. We owe him a little bit more personality beyond what he had the last time. But it’s fun to create all these beautiful worlds and then just blow them up.

GamesBeat: It has some goofy twists to it. Is that something that’s going to set this apart a little? We have some very serious shooters out there.

Sundberg: We’re not that type of studio. We don’t have the craziest people working at the studio, but — just Cause is all about having fun. It’s not a super serious experience. It’s not an emotional journey. What people remember about Just Cause 2 is the huge explosions, all the stuff they blew up and all the fun they had doing it. It’s not about that moment where they started to cry.

Lesterlin: The citizens of the world, I think, are appreciative of the fact that Rico is a little explosive in the way he does regime change. We don’t take ourselves too seriously. This is a gamer’s game more than anything. I think it’s why the modding community was so great about coming on board and making all the amazing mods that have kept Just Cause 2 alive for so many years. We owe it to fans of the franchise not to lose that core piece that makes him joyful. It’s a game about having fun. It is a game. It is not trying to be anything else.

GamesBeat: Not many franchises make it to the third one these days.

GamesBeat: You get over 100 million sold, you’re allowed to keep going.

Sundberg: We’re very grateful. We worked with Square and Eidos back in the day. We went through two mergers with them. We’re thankful for being able to evolve the franchise for such a long time. We hope to keep going that way. Someday we can maybe see Just Cause 14 HD.

Lesterlin: It’ll finally be in HD then, with the fourteenth one.

GamesBeat: How many years has this been in the works?

GamesBeat: There’s a lot of impossible stunts in there. Do you have more ways to survive them besides just the parachute and the wingsuit?

Lesterlin: Just Cause 2 invented that infinite parachute system. We gave it a bit of grounding, because it sucks back in behind Rico each time. You have a reusable parachute. But the reality is, you have infinite parachutes and infinite grapples and infinite wingsuits and infinite explosives to plant. Again, the game is about joyful exuberance. Go out and create your greatest action moment in any game or any movie. You can probably set it up in this.

JC2 was quite famous on PS3, that it was able to do the YouTube upload feature. Since then we’ve had millions of YouTube uploads. The top ones have 12 million views or something like that. People love sharing their experience. A lot of people can’t believe that’s actually possible in a game. That’s pretty special, for a franchise to have that sort of community experience. We wanted to make sure we kept pushing that. The new consoles are built for sharing and streaming. 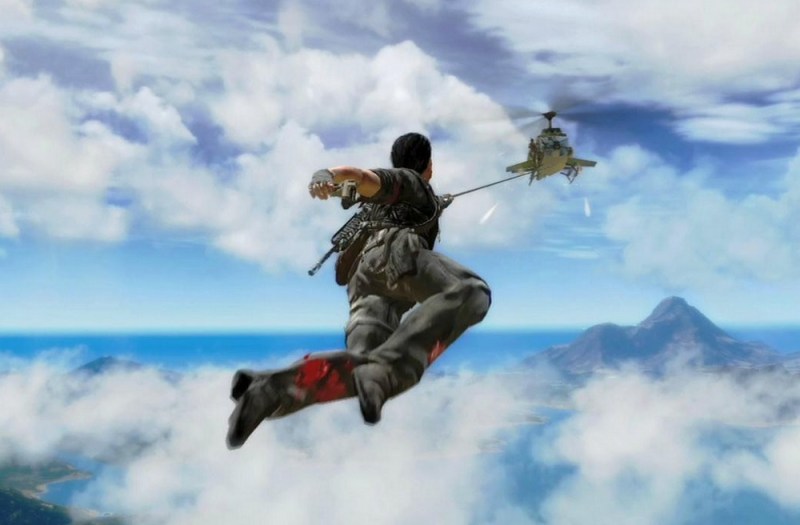 Above: Just Cause 3 has a super-powered grappling hook. Great for hitching rides.

GamesBeat: Maybe making it into an esport is next.

GamesBeat: It’s good to still see a goofy game being made. People need to lighten up a bit.

Sundberg: It’s a little sad. So many games are so extremely serious these days. Even games that are completely over the top try to be super serious. We need those games too. But we’re just not the type of developer that’s into that. I usually say that the world is so boring as it is, we don’t need to replicate that in a game. We’re the Prozac of gaming.