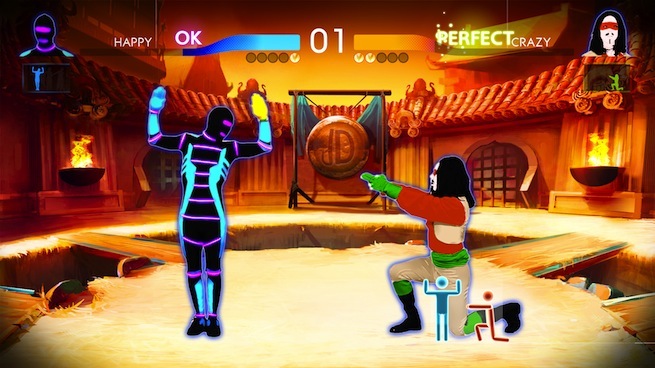 I was desperate. For the life of me, I couldn’t find an umbrella long enough to use for the choreography in (what else?) Rhianna’s 2007 hit, “Umbrella.” So I just settled for my brother’s kendo stick that was lying around the house … and somehow I managed to avoid smashing our glass table and the TV en route to my five-star performance.

To anyone who actually practices kendo, I am so sorry.

For French publisher Ubisoft, its multiplatform Just Dance series is huge: As of January this year, the franchise (which includes major titles like Just Dance 3 and a variety of spin-offs) has sold more than 25 million units worldwide. And Just Dance 4 isn’t the company’s only dancing game for 2012, with Just Dance Greatest Hits’ release this past summer, yesterday’s debut of Just Dance: Disney Party, and The Hip Hop Dance Experience that’s set to hit store shelves on Nov. 13.

So if you’re looking for a reason to shake your rump in your living room this fall, you definitely have no shortage of choices. But can Just Dance 4 for Xbox 360, PlayStation 3, and Wii keep up Ubisoft’s historic momentum? 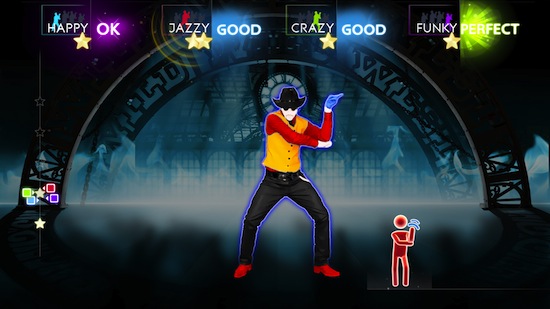 Time to get sweaty
While the meat of the game is the appropriately named Just Dance mode, where you flip through a list of songs to dance to, I found little incentive to play by myself. Instead, I spent a lot of time in Just Sweat, a dedicated fitness mode that turns dancing routines into proper workout programs. Each of these exercise regimens (divided into timed sessions of either 10, 25, or 45 minutes) come in different flavors, such as “Electro Body Combat” or “Aerobics in Space,” complete with warm-ups and cool-downs.

And thanks to the helpful onscreen calorie counter, I ended up adding Just Sweat into my regular physical training. It isn’t perfect as it doesn’t give you any feedback or tips on how you’re doing, but it’s better than running on a treadmill for 20 minutes.

Dance like nobody’s watching
Just Dance 4 is at its best when the dancing inevitably turns into mayhem. I realized this while playing the line dance version of Elvis Presley’s “Jailhouse Rock” with three other people: We constantly bumped and kicked each other in my small living room, and it didn’t take long before we gave up and started making our own moves to finish the song. Chances are that you and your friends will look nothing like the professional performers in the game, but that’s okay. That’s part of the charm.

The sillier song choices, such as “Time Warp” from the cult classic film The Rocky Horror Picture Show, are the real highlights of Just Dance 4’s 44 new tracks. They often have the most outlandish choreography in the game, and your friends and family are more likely to have heard of them than the latest dubstep tune by Skrillex.

And if you are stumbling from song to song like I was, a persistent leveling system called “Mojo” at least makes you feel like you’re progressing through the game by earning stars that help you level up. Each step forward can bring you either new battles, mash-ups, alternative dance moves, or harder difficulties. Even after spending a good chunk of time with Just Dance 4, I was still unlocking new bits of content to try. 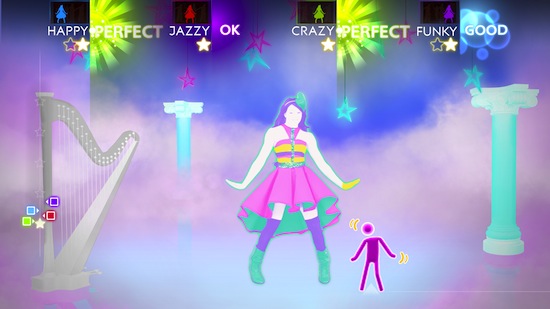 Lack of visual feedback
One of the tag lines for Just Dance 4 is “anyone can dance.” While this works perfectly for parties or playing with kids, it also means that the game is not concerned with teaching you the correct moves. Sure, you’ll see a small representation of your body via the Kinect, and you can try to correct yourself by closely watching it. But if you manage to score really low in certain parts of a song, it’s almost impossible to tell what you did wrong.

Sometimes you might raise your arm too high, or maybe your legs were moving in the wrong direction. Just Dance 4 doesn’t tell you. It can feel overwhelming — even on an easy song — to watch the professional dancers deftly groove from one complex move to the next. And since the pictograms on the side of the screen only show basic movements, a lot of nuance and detail is lost.

Annoying “press” interface
As opposed to the usual Kinect selection process of hovering your hand on something for a small period of time, Just Dance 4 uses an interface where you have to bring back your hand and vigorously poke toward the Kinect as if to touch the menu with your finger tip. But before you can do that, you’ll have to aim carefully or else risk triggering a song or menu option you had no intention of “pressing.” Only then should you thrust your hand forward and hope for the best.

If Ubisoft was trying to simulate what it feels like to play a game of darts after having one too many beers, Just Dance 4 is a rousing success.

Mistaken identity
The choreography can get a little crazy, and at times the Kinect just can’t keep up. Whether you’re playing with three other people in a coordinated line dance, rolling under your partners as they jump over you, or rotating around them during a battle, the Kinect can forget which dancer you’re assigned to. Suddenly, you might find yourself following the wrong moves. This happened a few times when I was playing with a friend: We switched “sides” to dancers neither of us chose at the outset of the song.

It sometimes helped if we went back to our respective sides of the TV, but for the most part, we had to wait until the end of the current song for it to fix itself. 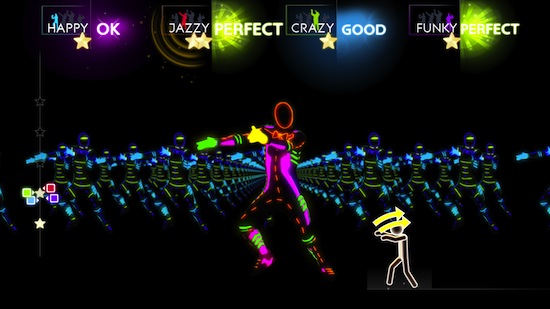 Just Dance 4 gives you the illusion of dancing with its flashy backgrounds, brightly dressed dancers, and high-scoring gold stars. But it does this by sacrificing accuracy and feedback: You probably won’t become a better dancer after playing this game. If you can accept these limitations (or just want a decent fitness routine to do at home), you’ll find a lot to like here.

Just Dance 4 is out now for the Xbox 360, PlayStation 3, and Wii. Ubisoft provided GamesBeat with an Xbox 360 copy of the game for the purpose of this review.