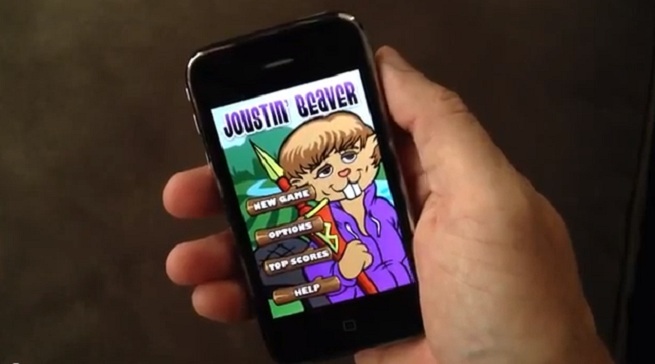 Pop star Justin Bieber won a round in his legal joust with RC3, a maker of mobile apps that created a game parodying the singer’s life. Joustin’ Beaver has been out for a while, prompting the singer to sue for trademark and publicity right claims in February.

RC3 countersued in Jacksonville, Fla., that it had a right to make fun of the singer on First Amendment grounds. After all, if Billy Crystal can make fun of celebrities at the Oscars, why can’t RC3 do the same in an app? Bieber’s attorneys have issued a cease-and-desist letter asking the company to pull the app from the Google Play and iTunes App Store.

In its lawsuit, RC3 said that the game was inspired by Biebermania. In the app, a beaver floats down a river. The cartoon character has long bangs like Bieber, and it has a lance and a purple sweater. The beaver takes out paparazzi-like Phot-Hogs that are trying to take his photo. The beaver also has to sign “ottergraphs” for onlookers, and it also has to dodge the “whirlpool of success.”

RC3 was trying to get the judge to sign off on a declaration of noninfringement. But U.S. District Court Judge Roy Dalton dismissed RC3’s complaint because Bieber doesn’t live in Florida. If RC3 has to file in another venue, it will likely make the lawsuit more expensive for the company.