Kan said in an interview with GamesBeat that the company want to make the ideal marketplace for selling game NFTs, which use the transparency and security of the digital ledger of blockchain to authenticate unique digital items.

[Update: Someone hacked Fractal’s Discord server verification bot and sent out a link to a fake drop. Victims sent $150,000 in SOL before the hack was discovered. Kan said he paid the users back with his own funds].

Players on Fractal will be able to buy gaming NFTs for partner games directly from studio drops or in the resale market from other players. Since first announcing the marketplace 10 days ago, Fractal’s Discord channel has grown to more than 107,000 followers, said Kan, in an interview with GamesBeat.

“It blew my mind that we got a lot of traction and people are pretty excited,” Kan said. “So we decided to set an aggressive goal and launch on Christmas Eve.”

NFTs have taken off this year as a new way to monetize games, and we have seen a boom in fundraising for the opportunity with startups like Mythical Games, Dapper Labs, Sky Mavis, Animoca Brands, and others.

If you look at Google Trends, you’ll see that NFTs started picking up in February and skyrocketed after related NFT sales like digital art and NBA Top Shot took off. Dapper Labs has now seen sales and resales of those NFTs top $780 million. In March, an NFT digital collage by the artist Beeple sold at Christie’s for $69.3 million. NFT sales hit $1.2 billion in the first quarter, $1.3 billion in the second quarter, and a whopping $10.7 billion in the third quarter as games such as Axie Infinity took off. 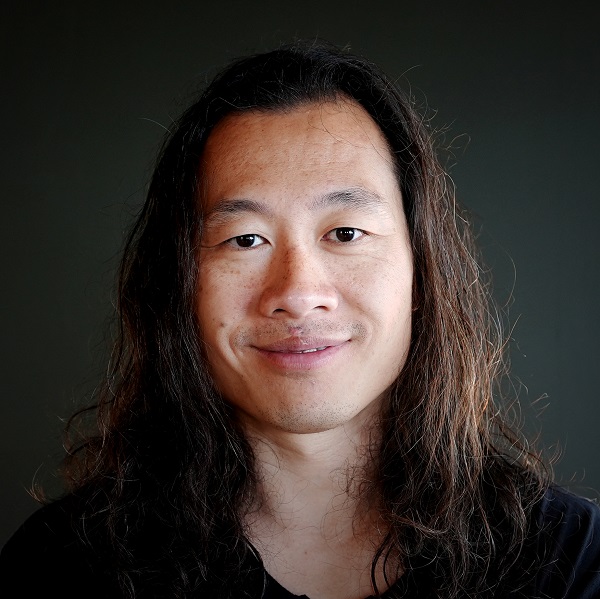 Above: Justin Kan is president of Fractal, a game NFT marketplace.

But the road to riches won’t be easy. Big companies have hesitated on the sidelines as they await rulings from regulators. Ubisoft launched its Quartz NFT platform last week with a giveaway of NFT items for longtime players of Ghost Recon Breakpoint. But Ubisoft got scathing replies, as did GSC Game World after it announced NFTs for Stalker 2. (GSC rescinded its NFTs after that). But other big companies like Com2Us, Zynga, and Jam City have said they are forging ahead with NFTs in a quest to find the fun.

Kan said his own company hasn’t been hit with negative reaction in the same way.

“We’re building a marketplace and we’re inviting the public to join our Discord,” he said. “Nobody wants to feel like they’re exploited by the community or the game company. This is a community project.”

NFT advocates like Kan believe that blockchain and Web 3 can liberate gamers and game companies from being dependent on platform owners, which take a 30% cut for things like marketplaces and distribution. Sidechains can speed up the pace of transactions for slow chains such as Ethereum, and they can also reduce the environmental impact. (Ubisoft said the Tezos chain could reduce the environmental impact to a millionth of the impact of Bitcoin transactions.)

On top of that, gamers can own their gear permanently and resell it for value when they no longer need it. This has spurred a whole “play-to-earn” movement that could disrupt the existing models for games. And part of that disruption is the emergence of new marketplaces like Fractal, Kan said.

“We’re giving everybody a unique snowflake NFT. We’re calling it a snow fractal,” Kan said. “If you have one of these NFTs, you’ll be able to get access to early sales.”

Kan believes that proper game design will result in NFT games that are fair for both developers and players.

Kan said that environmental impact is important to him, and he is making a large donation for climate causes, as he’s a “Burning Man nerd.” He’s using the Solana blockchain ecosystem, which has focused on low-cost (under one cent) and low-impact transactions. 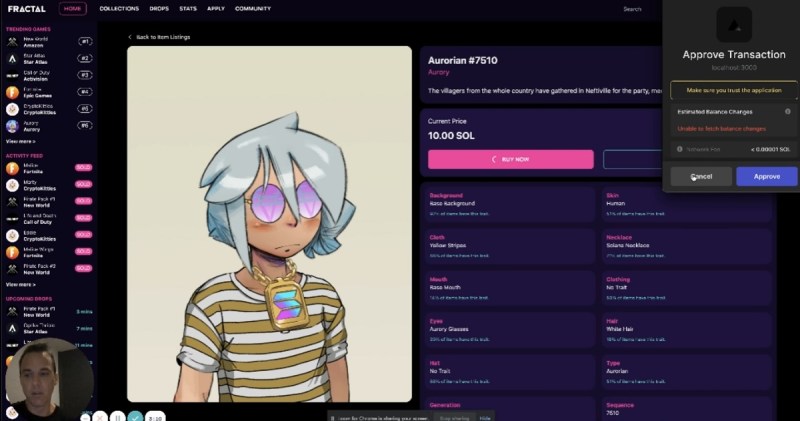 Above: Fractal is a new game NFT marketplace.

Fractal went live today on the Solana blockchain and players were immediately able to start trading in-game assets by connecting a crypto wallet such as Phantom. As a reward for joining the community early, the first 100,000 members will soon be receiving their own unique Fractal NFT. These NFTs will unlock future benefits for the NFT holder within the Fractal community and potentially in third-party games as well.

Players will be able to buy gaming NFTs directly from Fractal gaming partners as well as discover, buy and sell gaming NFTs from other players.

“Fractal is a marketplace for gamers made by gamers,” said Sebastien Borget, cofounder of The Sandbox, in a statement. “We believe it can help bring new audiences to discover NFTs and the possibilities offered by our open gaming Metaverse, so we’re happy to see users will soon be able to exchange, sell their virtual Lands NFTs and game assets on Fractal.”

Many gaming companies today are already generating the bulk of their revenue from selling digital goods that have in-game value to players and Fractal is the first marketplace to focus on gaming NFTs.

“We’re really excited to be working with Fractal,” said Albert Chen, CEO of Genopets, in a statement. “We believe their gaming-focused NFT marketplace will bring innovative functions that help us expand the play-to-earn experience to gamers around the world.”

Game companies have found a new kind of Kickstarter with the tokens they’re launching, sometimes ahead of when the game is ready and sometimes after it has launched.

Project verification will be an important task, as no one wants to see a company announce a 10,000 item limited edition NFT drop and then discover 70,000 fake items for sale in a market. Discoverability for new projects is also important. And crafting the right kind of NFTs also matters.

Ultimately, Kan sees NFTs as an onramp to the metaverse, the universe of virtual worlds that are all interconnected, like in novels such as Snow Crash and Ready Player One. (We’re doing our second GamesBeat metaverse online conference on January 26-27). That metaverse will get stronger when they are social channels like Discord and commerce opportunities as well through NFTs. 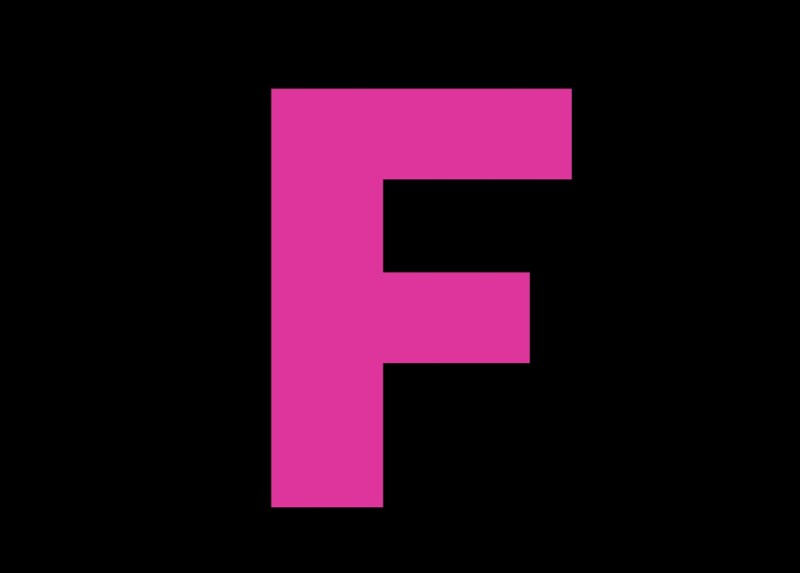 Above: The Fractal logo

Fractal’s leaders include serial entrepreneurs in gaming and ecommerce: Kan, president; Robin Chan, head of business development, and founder of XPD Media which was acquired by Zynga; David Wurtz, chief product officer, cofounder of Google Drive and an adviser to Shopify; and Mike Angell, chief technology officer, a 20-year ecommerce veteran who was previously at Fast and Shopify.

Fractal’s first partners include some of the most innovative games that have already been working on blockchain integrations. The exclusive NFTs they will be dropping on Fractal will be items that will give players abilities and experiences within their upcoming games. Fractal is focused on the crypto gaming companies that are building fun and engaging games with replayability.

After Amazon bought Twitch for $970 million in 2014, Kan has been investing in crypto since 2013, and has been an adviser to decentralized projects like Theta and Audius. And he’s returning to his roots.

“When I was growing up and playing games, I played an absurd amount of Ultima Online and World of Warcraft,” he said.

Richard Garriot’s massively multiplayer online role-playing game gathered thousands of players together in a virtual, persistent fantasy world. You could team up with players to kill monsters and collect loot. But if you died in the game, your hard-earned goods could be looted off your corpse by random passersby. It was brutal, unforgiving, but Kan loved the high stakes.

Players could keep their digital treasures in their persistent homes, but the real estate was scarce and eventually, houses started selling on eBay for hundreds of real dollars.

A real economy started up, and some players began farming and selling in-game currency online. To anyone not playing the game, this sounded ridiculous: how could something inside a video game be worth real dollars? The idea that digital goods could have monetary value wasn’t yet established, Kan said.

Now, it isn’t weird to make your entire living online now, making games on Roblox, trading cryptocurrency, or entertaining the masses as a Twitch streamer, Kan wrote. Game companies have embraced digital goods: in its first two years Fortnite made $9 billion in revenue primarily from selling skins. The business model of gaming has shifted away from game sales revenue to selling items and skins that have durable in-game value to players.

Kan’s own investment company backed Syn City in the crypto space, and that gave him insight into blockchain projects.

Putting these durable in-game assets on a blockchain is the next step in gaming, Kan wrote. While players have recognized the value of items in centralized games for a long time, when game companies create lasting durability beyond their games by making their in-game assets NFTs on a blockchain, tremendous amounts of value will be unlocked for players and the gaming ecosystems themselves, he said.

For players, this will mean they can truly own the value of their in-game work: items they own will be buyable, tradeable or sellable. For game companies, their in-game assets become persistent platforms on top of which other developers will be able to build experiences, Kan said.