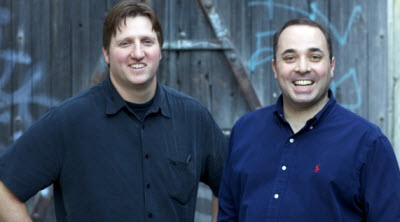 The deal gives Kabam more development firepower and it is generally part of a wave of acquisitions happening in the game industry as social game makers try to bulk up in order to stay competitive with market leader Zynga. Kabam has raised $125 million — a huge amount of money for a social game publisher — and now it has begun to spend it.

The deal adds six employees to Kabam’s roster of 450 people. Fearless Studios is led by award-winning writer and game director Haden Blackman (pictured left) and technology leader Cedrick Collomb (pictured right). Blackman is the creator and senior executive producer of Star Wars: The Force Unleashed, and Collomb was formerly director of engineering at LucasArts. As such, they’re an example of traditional hardcore game developers who have made the leap to social games.

“The Fearless Studios team brings a wealth of talent and experience in creating outstanding, highly successful AAA titles across a range of genres,” said Kevin Chou, CEO of Kabam. “Their skills in game design, emerging technologies and proficiency in making the transition from 2D to 3D on consoles mesh perfectly with Kabam’s strategy. We’ll significantly strengthen our industry leadership as the online gaming market transitions to higher fidelity, 3D gameplay with our acquisition of Fearless Studios.”

Redwood City, Calif.-based Kabam makes hardcore games on Facebook. The company has about 2.4 million monthly active users on Facebook, down significantly from 12.9 million in August, according to AppData. By acquiring a promising studio, Kabam could help stage its comeback.

Kabam has also invested heavily in games for other platforms. It has launched The Godfather: Five Families on Google+ and its own Kabam.com web site.The Godfather game is Kabam’s first branded title and it’s an example of the company’s ambitions to make high-quality games in the future.

Blackman has a knack for creating compelling stories, memorable characters and accessible gameplay. Star Wars: The Force Unleashed had all of those characteristics and it was one of the best-selling Star Wars games of all time, winning an award from the Writers Guild of America for best video game writing. Collomb has developed the technological backbone of many of LucasArts’ biggest games and helped harmonize Lucas’s game and film technologies into one development pipeline.

“There’s no way we could pass up the chance to marry our vision for creating story-driven action games with Kabam’s excellence in building great online franchises using their incredible infrastructure, distribution ability, and advanced analytics,” said Blackman. “Joining the hardcore social gaming leader gives our team a once in a lifetime opportunity to forge a new paradigm for what players can experience in an online game.”

Kabam was founded in 2007 as Watercooler and funded by Betfair and Canaan Partners. It had around 20 employees for quite a while as it experimented on Facebook, making sports fan pages and sports games. It had a big hit with its first major role-playing game, Kingdoms of Camelot, which quickly pulled in millions of users. The game still has 1.5 million monthly active users 19 months after its launch. Kabam also acquired WonderHill, a San Francisco game company that developed Dragons of Atlantis, which has become Kabam’s most successful game to date. The company has raised multiple rounds to date.