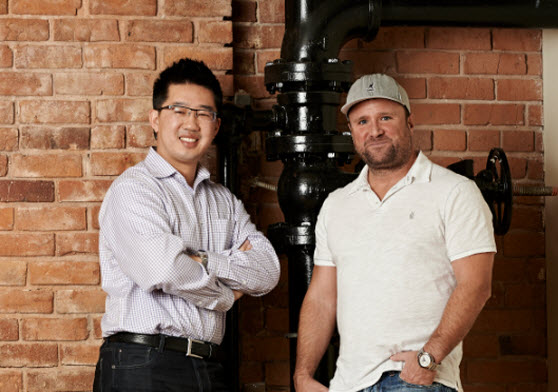 Kabam made a successful transition beyond Facebook in the past year, and now it is expanding again. The San Francisco free-to-play game company is acquiring Exploding Barrel Games, a 35-person development startup in Vancouver, Canada. Terms of the deal were not disclosed.

As free-to-play social and mobile games become higher quality, Kabam has set its sights on matching the quality of console games, said Kevin Chou (pictured left), the chief executive of Kabam, in an interview with GamesBeat. And Exploding Barrel Games is full of people like Scott Blackwood (pictured right), the studio’s president, who worked at companies like Electronic Arts for years building franchises such as Need for Speed.

Most recently, Exploding Barrel worked on Margaritaville, a critically acclaimed Facebook game published by THQ. But THQ has struggled, filing for bankruptcy in December, and it is no longer focused on social games. That created an opportunity for Kabam, which has doubled down on its free-to-play game studios with multiple acquisitions. With the addition of Exploding Barrel, Kabam will have more than 600 employees.

Exploding Barrel is based in Vancouver’s historic Gastown district. It is working on three unannounced games. Since 2010, Kabam has also acquired WonderHill, Fearless Studios, Gravity Bear, Wild Shadow Studios, and Balanced Worlds. In May 2010, it opened a development studio in Beijing, and it created a development studio in Austin, Texas, last year. It is hiring across the board, said Chou.

The company can do this because it has made a well-timed shift from social to mobile games. Its Kingdoms of Camelot: Battle for the North placed first on Apple’s highest grossing apps list for 2012. Kabam grew its revenues more than 60 percent above its 2011 revenue of $100 million. Once dependent on Facebook, it now earns more than 70 percent of its revenues from web and mobile games. Titles include Kingdoms of Camelot, which has generated more than $100 million since its launch in September 2009, and The Hobbit: Kingdoms of Middle-earth.

“We blew away our targets for 2012,” said Chou. “We did much better than we publicly talked about. It was a phenomenal growth year for us. That’s why we felt it was the right time to acquire EBG.”

Blackwood said in an interview that his team formed the company in 2009, focusing at first on triple-A console games and platforms such as Xbox Live. Then the studio switched its focus to digital platforms such as Facebook, and now it is making both social and mobile titles. One of the company’s games is undergoing testing in Canada, and it worked closely with Kabam on that title. Blackwood said that the studio looks forward to creating triple-A games, but not on the consoles. Rather, he’ll do that for new digital game platforms accessible via smartphones, tablets, and the web.

“Kabam is at the top of their game in the free-to-play space,” said Blackwood. “We learned a lot working with them.”

Chou said he sees free-to-play games as a merger of art and science, combining traditional gamemaking with analytics and science for running games with a trove of customer behavior data.

The industry is clearly changing, said Chou. He went to the Consumer Electronics Show in Las Vegas, where you could “symbolically see mobile is the wave of the future with Paul Jacobs of Qualcomm taking the opening keynote from Microsoft. The whole focus of the show was going mobile. And the connected living room is coming to fruition in the market. The next generation of consoles is coming, but they will battle a whole line-up of smart TVs from every TV maker. Those are Android-based TVs, and they will have games.”