Kamcord offers a simple-to-implement solution for developers to add gameplay recording and sharing to their mobile titles. The company recently worked with developer Deemedya on getting gameplay recording in the studio’s popular mobile motorbike game Trial Xtreme 3 for a case study.

During the study, players recorded 139 million games of Trial Xtreme 3. Kamcord also revealed that it players shared 122,000 videos and watched their own replays 743,000 times.

“Kamcord has helped our game get great exposure on key social media channels, winning us more downloads and popularity,” Deemedya founder Doron Kagan said. “Plus, users love Kamcord — they use it to improve their riding skills and to achieve better scores.”’ 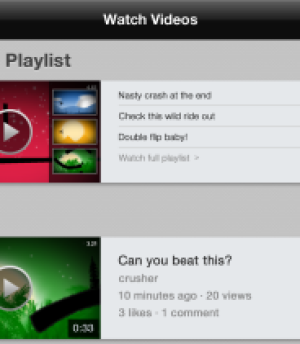 As part of reaching its latest milestone, Kamcord is also announcing a suite of new features and a new investment.

Kamcord revealed that it raised $1 million in seed funding for a total of $2.5 million. Chinese Internet company Tencent and investment firm Innovation Works led the round.

With this influx of cash, Kamcord plans to invest in the aforementioned new features. It is planning to launch a consumer-facing website so players can quickly access their recordings across all games. The company also plans to add profiles, likes, comments, and subscribing into its SDK to increase stickiness for games that use its recording features.

Kamcord is also creating a new user interface that features a playlists of the best videos from a certain game.