Too many shooting games feel like slogs through war and murder. It doesn’t have to be that way.

Keiji Inafune is best known for the 2D action platformer series Mega Man (and his recent release inspired by it, Mighty No. 9), but he’s now producing a 3D game exclusive to the Xbox One and PC, ReCore, which hits the market September 13. Inafune’s Comcept is creating this along with Amature, a studio created by former developers at Retro (Metroid Prime). ReCore has a lot in common in Mega Man. It’s all about jumping and shooting robots.

When you look at a lot of the Xbox One’s other big, upcoming games, it stands out. Despite all of the robot violence, ReCore is colorful and doesn’t strive for realism, which puts it in contrast with blood games like Gears of War 4 or titles with photo-realistic graphics like Forza Horizon 3.

GamesBeat met with Inafune at the Electronic Entertainment Expo in Los Angeles earlier this month. We discussed ReCore’s place in the Xbox One’s  lineup, his obsession with robots, and more.

GamesBeat: What has it been like working with Microsoft?

Keiji Inafune: It’s been very educational, I want to say, working with Microsoft. In a very positive way. A lot of times, when we develop games we do it from the gut, from instinct. We create what we want to create in the way we want to create it.

Microsoft takes a very logical approach. They establish the target demographic, what they’re aiming for, at the very beginning, and make a fixed target before they start developing. Working with them, we’ve been able to dial in a completely different way of developing games. It adds quite a lot of focus and direction to a game.

GamesBeat: Robots are a big part of a lot of your games. Why do you find them so interesting?

Inafune: It’s an almost unconscious choice. In Japan, we’ve been exposed to robots in popular culture a lot more than anyone else in the world. We’ve grown up with manga and anime that explore robot heroes and future worlds with robots. Whenever I think about, what does the future look like, robots naturally come into play in one form or another. I’ve been exploring that in my own sort of way. It might even be ingrained in my DNA at this point. It’s part of my games and the worlds I develop.

GamesBeat: You’ve worked on a lot of games that mix platformer and shooter gameplay, but most of them are 2D. Is it more difficult to make this kind of game in 3D?

Inafune: There are certainly more challenges when you’re trying to work in the X-Y-Z, the three-dimensional space. Especially when you want to create something as precise as what a platformer might demand. But thanks to our partnership with Armature and their abilities and past experience, they’ve really nailed the feel we’re going for. They instinctively know what a good platformer feels like in a 3D space. We were able to trust them with a lot of those mechanical gameplay decisions.

GamesBeat: When you were at Capcom, and in Mega Man’s history in general, there weren’t a lot of 3D Mega Man games, outside of the two Legends. Was that something you wish you’d been able to experiment with more, or do you think they were enough?

Inafune: I definitely think there are things I would like to have explored further and done more with in Mega Man Legends. But that doesn’t mean that, in the context of ReCore, I’m doing what I wish I could have done with Mega Man. ReCore has its own very unique charms. That was the idea from the very beginning with this. ReCore has its own flavor as a 3D action game. I’m very proud of what we’ve been able to achieve. 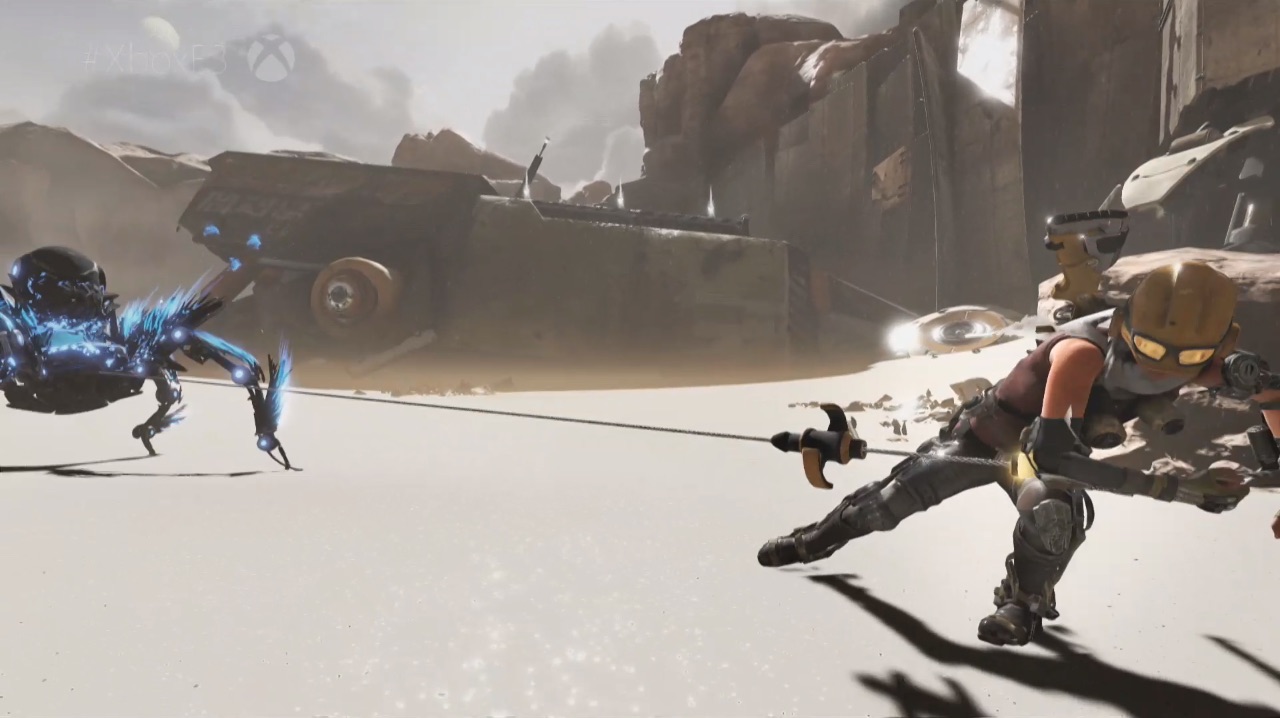 Above: ReCore in action.

GamesBeat: With action platformer games, there’s sometimes an expectation that they’ll be more difficult than most games. Is it a challenge to find the right balance between difficulty and accessibility today, especially compared to the old days of Mega Man?

Inafune: To your point about people expecting action games to be difficult, I think what the Xbox lacked — this is a big strategy to our collaboration with them — they have a ton of mature games, but they don’t have as much targeted at teens and below. That’s a fundamental structure that we chose to build ReCore around. It might look really simple when you first pick up the controller and start playing around with it, but the system has been developed to have a lot of depth. There are lots of ways to interact with what’s going on in the world, a lot of ways to learn and grow as a player.

For players who don’t have as much experience with action games, this is a good segue if they want to progress toward something harder or if they just want something nice and fun. That doesn’t mean to say there’s no depth here. Even experienced gamers will find it really engaging.

GamesBeat: With the Xbox One, we see a lot of games that are realistic, violent, and grim. Does it feel good that your game is a bit more light-hearted? It has that desert setting, but there’s still a lot of color to it.

Inafune: One of the charms of Japanese game development is pursuing that kind of non-photorealism. A lot of that comes from gaming’s ancestry in anime and manga. It’s not say that one style or the other is better, but with ReCore what we’ve tried to achieve is something that’s neither photorealistic nor completely animation-style.

We’ve tried to develop this hybrid art style. Once we came up with our concepts, we and Armature have worked back and forth to develop this very unique look. It’s not photorealistic, it’s not anime, and it’s not anything half-baked either. It has its own style that makes a lot of sense in the context in which you play it.

GamesBeat: A big part of the game is the robot companions. If you could have one of your own, which animal robot would you choose?

Inafune: I’ve personally never had a pet dog, but I have kept a cat. This game doesn’t have any cat robots or cat-inspired robots, but I’d definitely think that if I had the chance, I’d be very used to interacting with a cat. So I might want to explore the potential of a cat robot.