No one but Keita Takahashi could make a game like Wattam. He’s known for Katamari Damacy and Noby Noby Boy, and his newest project sports his signature cheery colors, goofy sense of humor, and playful mechanics. Even though it might appear as friendly chaos, it’s not all random — Takahashi created it with a reason in mind. He partnered with publisher Annapurna Interactive, and it will be due out later this year for PC and PlayStation 4.

Katamari Damacy came out in 2004, and its playful mechanics and zany, addictive soundtrack made it an instant classic. It won accolades, like the Excellence in Game Design award at the 2005 Game Developers Choice Awards, and it was later featured in the Museum of Modern Art as an example of the artistic merits of video games. Wattam doesn’t have the same mechanics, but like Katamari, it has an imaginative free spirit and radiates unrestrained joy.

When I gave the demo a spin at E3, I found Wattam to be brimming with charm right away. The world is both beautiful and harmonious, but some kind of disaster destroyed everything and left a character known as the Mayor alone. From there, the player must help him discover and make new friends – all of whom are everyday objects like rocks and silverware and strawberries. The Mayor is a green cube who sports a bowler hat, which he can lift to activate a confetti bomb that delights all of his new companions. You can switch from one character to the another, and the more you bring them together, the happier everyone gets and the more characters you can unlock.

I recently caught up with Takahashi, who, as far as I know, is not related to me. Here’s an edited preview of our interview. 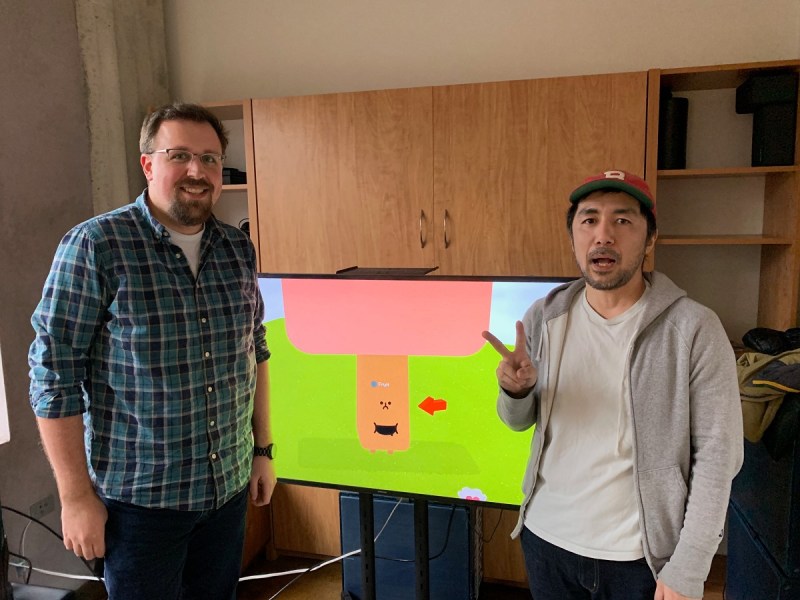 Above: Keita Takahashi (right) of Funomena shows off Wattam with Ryan Mohler, lead animator and artist.

GamesBeat: What progress have you made since E3?

Keita Takahashi: It’s getting there. We’re almost finished, but we still have a few bugs we need to fix. We’re pretty happy about that.

GamesBeat: Does it feel very similar to what we saw a few years ago, or is it very different now? It seems like the basics are the same. I didn’t feel like I was led to do things before, whereas here you’ve done things in a certain order. The basics of doing a big explosion is what I remember.

Takahashi: The basics aren’t changing, no. But the previous version was just a prototype that we used to figure out what we could do, or should do. In the new version, we could focus on what we wanted to do.

GamesBeat: You have to think a bit more about what will lead to more things. If you eat someone, you can create something else. It’s still very imaginative.

Takahashi: That’s what I do. [Laughs] That’s only what I can do.

GamesBeat: What is your goal? Just to make this crazy fun experience?

Takahashi: This game’s goal is to bring back your old friends and old family together. It’s a very story-driven game.

GamesBeat: Is this just the start of the story, then?

Takahashi: Right, it’s just the start. This is the spring world, and later you can unlock summer, autumn, and winter.

GamesBeat: Does it all take place on a platform like this? 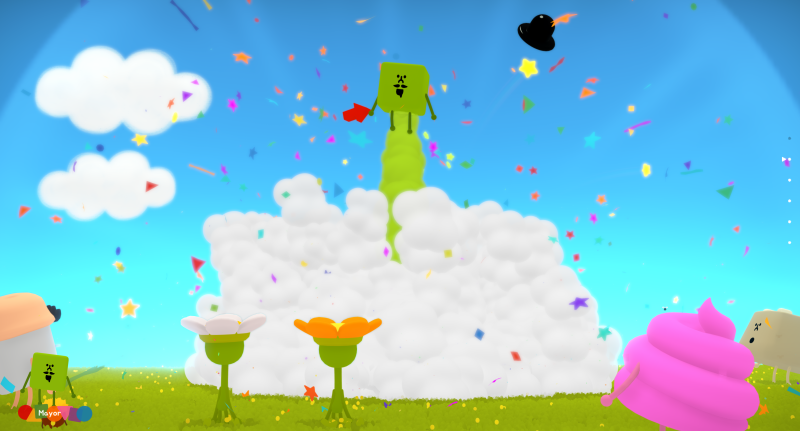 GamesBeat: What would you say the goal is? Just to finish the story?

Takahashi: That would be a spoiler. [Laughs] But in general you’re trying to bring back your family and your friends.

GamesBeat: You want to find as many creatures as you can, then.

GamesBeat: Do you feel it’s very different or similar to Katamari in some way?

Takahashi: It’s totally different. Katamari had some story, but this is a much more story-based game than Katamari.

GamesBeat: And you communicate the story without words?

Takahashi: It’s subtitled, so as you saw in the beginning, you have things like the Mayor saying he’s sad. We communicate through text bubbles or subtitles.

GamesBeat: But there isn’t much dialogue.

Takahashi: There’s some. A little bit.

GamesBeat: It looks like there are a lot of different kinds of creatures.

Takahashi: People. [Laughs] “Creatures” is a word we use to “other” things. Trying to identify them as people is a metaphor, in a way.

GamesBeat: You want people to feel more connection to them.

Takahashi: Right. They’re the same as us.

GamesBeat: Why do you call the one guy the Mayor?

Takahashi: Because he’s the Mayor.

GamesBeat: Is there a town? 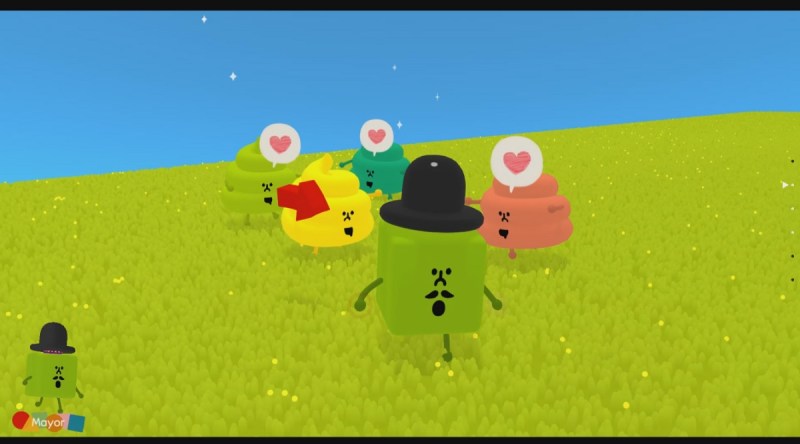 Above: Wattam is a crazy title from Keita Takahashi and Funomena.

GamesBeat: Does each person have a name and a story to them?

GamesBeat: Are all the people connected to each other in some way?

GamesBeat: Why do you have blood type listed for everyone?

Takahashi: Why not? It’s part of the collection data.

GamesBeat: Is it more of an accomplishment if you get that big giant fireworks explosion? Is that one of the purposes of the game?

Takahashi: That was definitely a question in the original demo. It’s not as much of a focus anymore, to get a bigger explosion. It’s about the joy of individual explosions and people wanting to join in the fun. 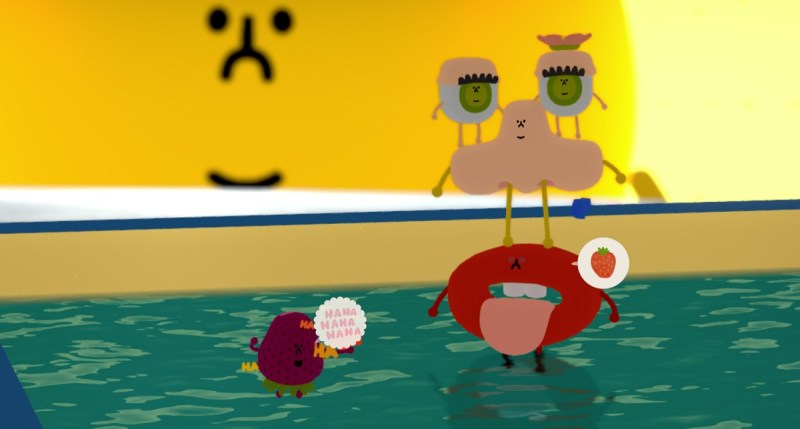 Above: Wattam has unique character design.

GamesBeat: So it’s not like Katamari, where you just want something to get bigger and bigger.

Takahashi: That’s something you can do, but it’s not a driving force.

GamesBeat: What were you thinking when you came up with this and worked on creating this?

Takahashi: There was an idea—when I moved to Vancouver from Tokyo, there were many different races of people. Indian, Chinese, Russian, some European people, South African people. But they all speak English too, to work together. That was impressive to me, because I’m Japanese, and almost all the people living in Japan are Japanese, and only speak Japanese, of course. That was very refreshing. Everyone can work together and try to make something. But we also have tons of issues that come from our differences, whether it’s skin color or religion or some other perspective. I was thinking that it was interesting, that it’s a serious issue that we need to somehow solve.

One day I was playing with my son, playing with building blocks, stacking them up. He was two years old and he just broke down my stack and laughed. He did that over and over again. It made me think that building something up and then breaking it could be interesting and fun for kids, and also for me, maybe. From there I got the idea of, what if each individual block had a life? They could move around, and they could get stuck together by themselves.

The idea of these blocks and what I was thinking about around diversity got connected in my brain. That gave me the idea of Wattam. Each single block could be a different person with a different perspective and different language. They can work together to make a stack, but they can’t communicate, because they have different languages. But they might be able to find a kind of joy through breaking the stack, through that big explosion. GamesBeat: Does it feel like you’re trying to bring order to the chaos of all these people? Taking things that are spread out and bringing it back together?

Takahashi: It has that kind of flow. You blow everyone up, spread them away from you, and then re-collect them, add them to your group.

GamesBeat: Like the big bang and then a black hole or something.

Takahashi: Yes, this game is about the big bang. [Laughs]

Takahashi: I see what you mean. I wouldn’t go that far.

GamesBeat: Just bringing them together is really the point?

GamesBeat: How did you know that you were finished, that you were almost done? You worked on this game for a long time, but did you have a certain end in mind?

Takahashi: I never really feel done, even when something is released. It’s a typical artist’s kind of feeling.