A solid majority of parents expect that virtual reality will help educate children but believe the technology also poses health risks, a new report from Common Sense Media said today. The nonprofit media research group’s Virtual Reality 101 study is cautiously optimistic about the increasingly popular technology, noting that educators and parents are excited about VR’s potential, yet concerned about its “powerful effects.”

Coauthored with Jeremy Bailenson, head of Stanford University’s Virtual Human Interaction Lab, the Common Sense report includes both scholarly research and the results of a recent national survey. The survey sampled 12,000 adults, including over 3,600 parents with at least one child under 18 and over 470 with a child between 8 and 17 who uses VR.

Although current VR adoption levels in homes are low — around one in five U.S. homes today, with 65 percent of parents not planning to purchase VR hardware — the survey suggests that 70 percent of U.S. children are either extremely or fairly interested in experiencing VR. This enthusiasm from kids is expected to drive the market for VR, the report says, despite parental skepticism. 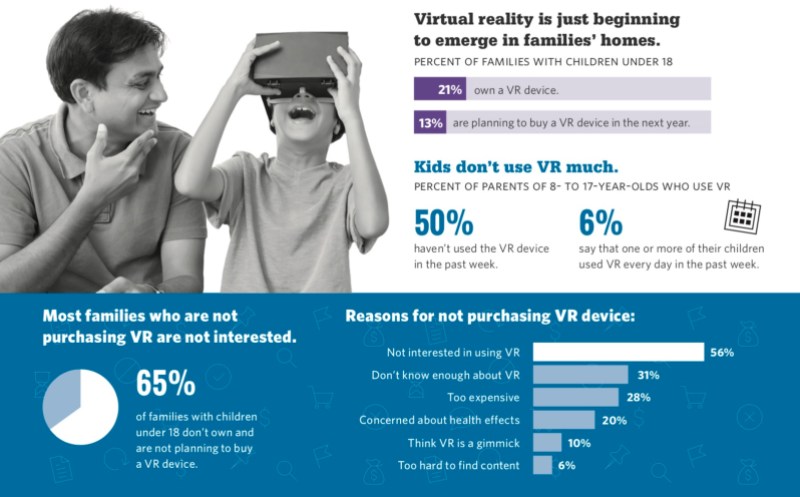 Common Sense notes that VR’s strength — and key point of concern — is that it can “provoke a response to virtual experiences similar to a response to actual experiences.” On the plus side, this includes the potential for positive influential interactions with VR characters that encourage empathy and generate enthusiasm for learning. The report also notes that VR can assist kids with pain management and inspire fun, imaginative play.

On the other hand, it’s still unclear what impact VR might have on “still-developing brains and health,” a topic that has remained under debate with non-VR games for decades. Unsurprisingly, researchers are recommending moderation and parental supervision as the solution, particularly for kids under 7, and to some extent for kids under 13.

Specific tips offered by Stanford’s Bailenson include limiting kids’ use of VR to 20-minute sessions with three-minute breaks, encouraging them to sit rather than stand when possible, and preparing environments in advance by removing animals and dangerous objects from rooms where VR is being used.

Some of the study’s other key findings include:

The full report is available at Common Sense Media’s website after free account registration. Parents interested in bringing VR into their homes will find plenty of worthwhile food for thought inside.