Parents are dropping a serious amount of cash to keep their kids’ tablets and smartphones filled with games.

Spending on games for children makes up 7.8 percent of the worldwide mobile gaming market, according to industry intelligence firm SuperData Research. That’s $1.9 billion spent on apps like Minecraft: Pocket Edition, Crossy Road, and Animal Jam. But that money is not necessarily coming from the same kinds of free-to-play games that dominate in other sectors. Instead, premium-priced games with upfront costs make up a respectable ratio of the total revenue.

Developers that want to capture some of that spending, which is a significant chunk of the total $30B mobile-gaming ecosystem (as market research firm Newzoo estimates — although SuperData estimates put it closer to $25B), should know that spending on younger kids is a bit different from other kinds of players.

If you’ve seen kids in public recently, the level of spending on mobile games probably doesn’t surprise you. Many young people are always carrying an iPhone, iPad, or Android gadget with them wherever they go. This is especially true in the United States, where spending on kids’ mobile games actually makes up 9.3 percent of all mobile gaming revenue. 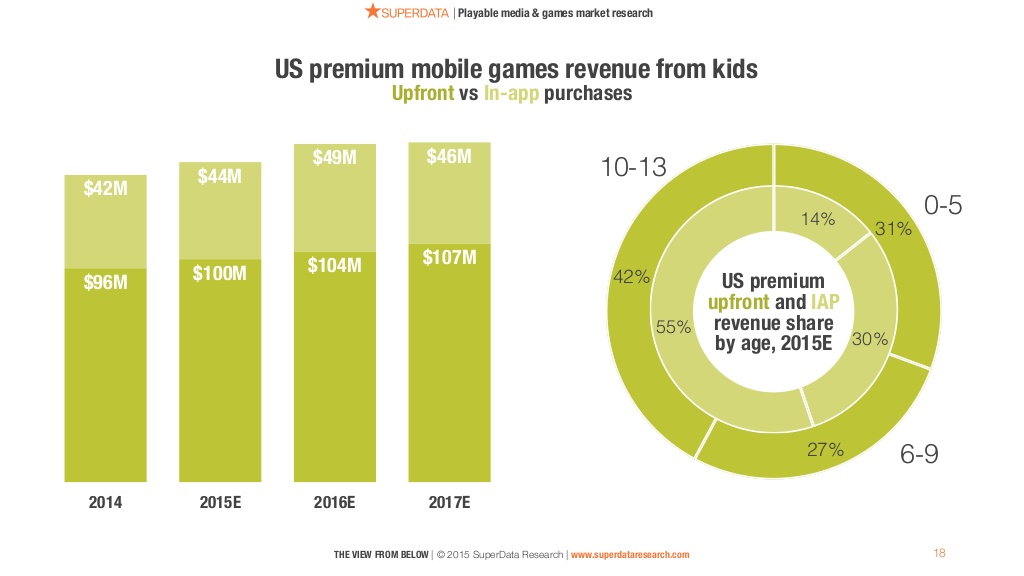 In 2014, apps with an upfront cost made $96 million in the U.S. Those games then went on to make an additional $42 million from their in-app purchases. SuperData is predicting similar results for 2015.

SuperData explains that premium-priced apps are successful because they more easily comply with global standards when it comes to marketing to children. For example, the Children’s Online Privacy Protection Act (COPPA) in the U.S. limits the kinds of data games can collect on children who are younger than 13 years old — and that data is often crucial to converting free-to-play gamers into paying customers.

Additionally, parents tend to like premium-priced games because kids are less likely to bother them about buying “energy” or “gold.” It’s a one time fee and then the kids can just enjoy that game forever with maybe the occasional skin pack or bonus item.

Of course, free-to-play games still make more money even with kids. In 2014, they brought in $245 million from U.S. players. Sure, premium-priced apps are more popular with parents and younger players, but they have a price ceiling. Free-to-play, however, does not have a limit on the average revenue per player, so whales who spend hundreds (or even thousands) of dollars can still exist even among children … who have access to their 1 percenter parent’s credit card.