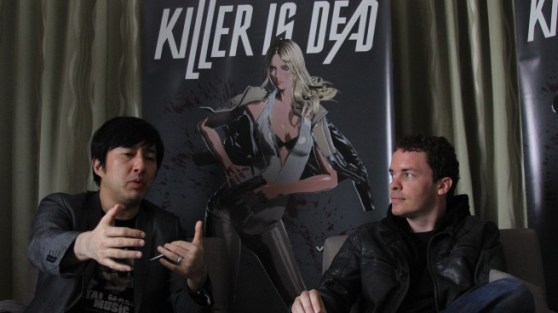 Everyone’s waiting to see what Suda51 does next. Goichi Suda (a.k.a. Suda51) and his company Grasshopper Manufacturer have been behind some of the most absurd and original games in the past several years. Despite his seemingly niche style, many of Suda’s projects have received plenty of exposure, especially 2012’s Lollipop Chainsaw, an over-the-top zombie splatterfest starring a perky chainsaw-wielding cheerleader as its protagonist. Suda’s next project, Killer is Dead, is a third-person hack-n-slash that, spiritually and aesthetically, picks up where the cult classics Killer7 and No More Heroes left off.

GamesBeat recently had the rare opportunity to sit down with Suda (and his spectacular shoes) and talk about sequels, multiplayer, and more. All answers were through a translator.

GamesBeat: You’ve been really busy over the last several years producing numerous original digital and retail titles. That’s something that’s unfortunately not very common in this sequel- and franchise-happy industry. Why is original intellectual property [IP] important to you and what allows you to do what so many others can’t or won’t?

Goichi Suda: I think it’s simply — that’s just my cycle of creativeness. After I finish a project, I start on another concept. I put the concept sheet together and start talking to other people. It’s just how I work. I don’t really work on the IP that I created before. As a cycle, I create one thing, and then I move on to the next one.

GamesBeat: One of the reasons why constant original products are not very common is money is that new IPs are too risky in the eyes of major publishers like Capcom and Electronic Arts. Suda51 games would probably be a lot riskier for a big publisher to take on. On the business end, how are you able to keep your cycle going?

Suda: I’m not sure there’s a secret to it. My opinion is it’s just that we were lucky enough to get into this position where we get offers from the Japanese publishing side and also in Europe from studios and publishers. It’s just a unique situation that Grasshopper is in. Another thing is we really care about what our fans think about it. We want to make sure that fan base is satisfied. We’re always looking for what they’re looking for and trying to provide them with what they’re seeking. 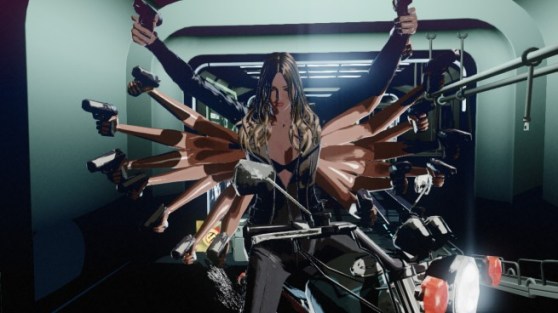 GamesBeat: Mondo, the main character in Killer is Dead, is pretty well-covered in the press by now. Could you talk about the character of Vivienne (pictured above) a little bit more? What does she bring to the game?

Suda: Vivienne works at the same agency as Mondo. She’s his direct boss. And then Brian — he’s the chief of the agency. Then there’s also another character named Mika, who’s kind of a support staff for Mondo. In the game, you’ll be controlling Mondo and going through the stages, but you’ll see Vivian, Brian, and Mika come out and support him in various situations. It’s not a character that you’ll just see in the cutscenes. You’ll see her in gameplay as well.

GamesBeat: How do those support moves work? Is it maybe like a summon in Final Fantasy or something, where you can use them any time but maybe is a limited resource? Or is it at scripted events?

Suda: Sorry, but we can’t get into the details for that one right now. Let’s just say that they come in at the right time. [Laughs]

GamesBeat: Through several of your past games, you’ve focused on the sword-based gameplay. Do you have any interest in introducing multiplayer into a game? Not necessarily for Killer is Dead, but do you have aspirations of maybe doing an Anarchy Reigns type of game?

Suda: Multiplayer is something that I’ve been looking at and wanting to implement in my games for a long time — for a few years now. We weren’t able to do it for Killer is Dead, but as a gamer, when I play games, if there’s a multiplayer function, I’ll jump in there and try to have fun. It is something that we’ve wanted to try to provide to our fans for a while. We want to look into it in the future. 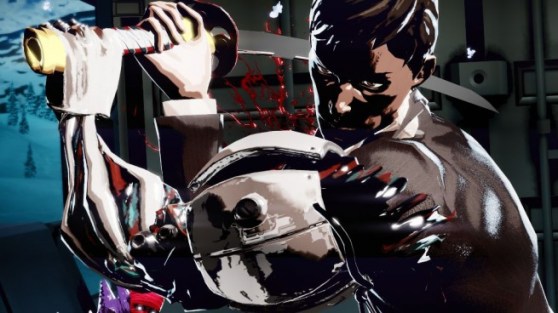 GamesBeat: Hideo Kojima recently stated that he felt that over the past 25 years, games haven’t really matured that much. That’s something that he’s always striving for, but he feels like he hasn’t really gotten there, and many other mainstream titles definitely haven’t helped push in that direction. What are your thoughts on that sentiment?

Suda: I sort of understand what he’s trying to say. I don’t have a clear vision, but I do feel that there’s something more we can advance to. We’re just not there yet.

GamesBeat: In your own games, is that something you aspire to accomplish?

Suda: Yes, there’s something I’m striving to do every time I create a game. It could be a new experience — just a new type of way to play. Just something new. I think one day, I or somebody else will come up with a brand new way of thinking about gaming, and I think that will be a total game changer in the industry. But every time I’m creating a new game, I’m reaching out and trying to grab something that’s new — that could give some kind of new experience to the users.

GamesBeat: What have you tried to bring that’s new to the hack-n-slash genre? Recently we had DmC, the Devil May Cry remake, and Devil May Cry has always been known for really solid hack-n-slash gameplay mixed with various guns. What do you try to bring when you do a game like Killer is Dead or No More Heroes?

Suda: For this title, I wanted to have different feel. It’s more like a season of a TV show. Each episode has a beginning and an end. Some of them are connected together, and overall, there’s an overarching story. But instead of past titles where everything happens over one night, I just wanted to have something more like daily life — that becomes a season and has a story within it. 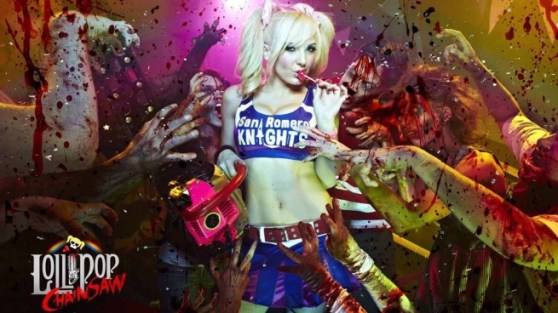 GamesBeat: When you guys did the marketing for Lollipop Chainsaw, you actually hired Jessica Nigri, who is a famous cosplayer. And so, you had her representing the game at PAX and various events instead of hiring a booth babe, for example, which is kind of a controversial thing.

Booth babes have become this decisive topic in the industry over the past couple of years. But you and a few other companies have actually tried to hire people that do understand your games and can better represent them. Why is that important to you, and what was your experience working with Jessica like?

Suda: Not only in the U.S., but Jessica’s pretty popular in Japan as well. To have somebody that — she just has this aura that she’s a gamer, and she really enjoys playing games. I think that comes out of her — that she enjoys playing games. Having her made the promotion really effective, especially at PAX last year. The reaction that we got was overwhelming. She’s really easy and fun to work with. In the near future, I think that there will be more of these types of people who are actually gamers. I think we’ll see more of these people, and different companies will start utilizing them as well.