The launch of a new console comes with a demand for shiny, exciting games to help hawk the system before the first-party studios can make the most of it. Killzone: Shadow Fall, much like Killzone 2 for the PlayStation 3, is acting as the opening salvo for the PlayStation 4 in this new console war, and this sci-fi shooter looks fantastic while doing so.

Enough of the franchise’s solid gameplay mechanics have made the leap to this new generation, and it all adds up to an experience that is definitely worth playing. But the call for “next-gen visuals” demanded a sacrifice in other areas that should definitely give players pause before paying full price.

Everything has that next-gen shine 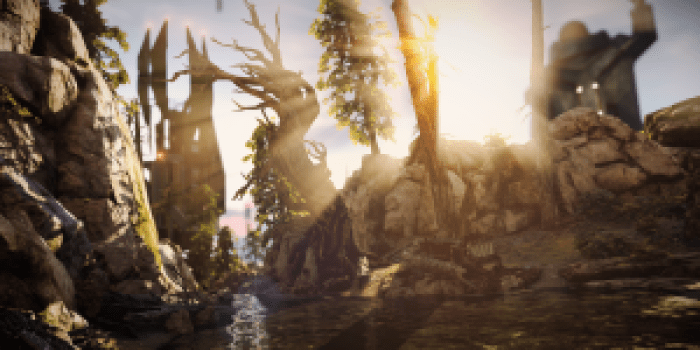 Above: Everything on display, from environment and lighting effects to audio, is undeniably beautiful.

Like most set-piece-based shooters released over the past five years, Shadow Fall knows exactly how gorgeous it can be. Guerrilla Games’ in-house Umbra3 engine is put to some serious stress tests here, with a story packed with explosions and scenic vistas. NPCs shout orders at you next to the open side of a military aircraft flying over the pristine metropolises of Vetka, star Lucas Kellan’s home planet, just as they deliver impassioned speeches on rising cargo lifts conveniently astride the most gorgeously devastated portions of Helghan, former home of the enemy Helghast army.

The early levels burst with lighting dancing through treetops and rushing rivers, placing most of the action near a skybox or massive overlook of a city to emphasize the effect. The combination can be truly stunning most of the time. Areas are cluttered almost to the point of interfering with gunfight visibility, and loose papers and crates flutter and scoot along the floor with a believable weight. The filtered lighting effects in both indoor and outdoor environments, the strong and solid shadows, and the glimmer of wet roads or grated walkways sell the idea of “next-gen visuals” better than any press release has before.

The sound is also a high point, with background noise ranging from muffled conversations to explosions with equal depth. Rain effects can go from barely audible to nonexistent depending on the scene, but mechanical groans and shattering glass produce an admirable effect. The voice acting ranges from passionate and precise from the lead cast and audio logs to disingenuous and stunted in background conversations. The audio design’s flaws are minimal and often hidden well enough to the side, leaving a prominent, booming orchestra of destruction at the forefront.

A showcase for Killzone’s technical strengths Above: What’s been well implemented in the past remains strong in Shadow Fall

While the first half of the campaign is a collection of straightforward shootouts, it’s not too long before more varied level layouts and less straight-forward enemies bring back the level of polish that has come to be expected of the Killzone series. Enemy A.I. remains competent if not particularly clever, and mercifully, they are still the least prone to grenade spamming than the baddies from comparable shooters. Movement in and out of cover is as smooth as ever as well. The expected arsenal of rifles, shotguns, handguns, and explosives returns, with the hyped assault/sniper rifle hybrid being more useful as a crowd-control weapon you can’t swap out for other guns (too bad it’s not more versatile).

Multitiered missions objectives are more a method to showcase the size of the various areas and levels than anything else, although you will spend a pleasurable half hour early on finding higher and higher places from which to use your zip line. Brief exploratory segments in zero gravity also refreshingly changes up the pace between gunfights.

Enlisting as Shadow Marshall Kellan also equips players with an OWL droid, a utility bot controlled largely through the PS4 controller’s touchpad. Swiping along the four primary directions turns the droid into a zip-line, a one-way shield, an attack decoy, or an EMP blast, and this is by far Shadow Fall’s most interesting addition to the Killzone’s single-player campaign. Far more responsive than I expected, the OWL droid becomes an excuse to add a bit more strategy to all of the running and gunning. It throws a bit of a screwball against the rather standard difficulty curve, but it remains an optional accessory throughout most of the game, beyond a few mandatory zip-lines.

Above: Multiplayer has that frenetic pace and “just one more match” feel.

Multiplayer is definitely Shadow Fall’s chief attraction, and it has the balance and variety to back that up. Map variety is good enough to last most players through to the first batch of DLC, and the wide and empty maps are as much an asset in group play as they are a detriment in single-player. Post-respawn jaunts to most mission objectives can quickly become dull in The Park and The Penthouse maps, but it’s not too long before players need to start shooting in any given scenario.

The consumer-mandated spread of defending territory, capturing beacons, and death matches are all accounted for, and all run with the frantic energy necessary for such tug-of-war objectives. Chaining modes – even those less popular – into a lengthy 8-on-8 campaign is the most fun that can be had with Shadow Fall, single-player or multiplayer, as long as you aren’t entirely devoted to what’s new. Starting out with every gun available is an excellent boon to any player skeptical about spending hours unlocking everything, although it does mute the appeal of what can be unlocked through perks and challenges a little, at least for the first dozen or so.

Character advancement is smooth, and the perks flow regularly throughout any match type or class choice. It doesn’t quite allow the advanced player profile specialization as promised, with not enough class or play-style specific challenges between the incredibly easy or insanely difficult to accommodate the majority of players. Despite not living up to the hype, the stat and perk meta-game in Shadow Fall still has that addictive potential that demands just one more match, and encourages trying every available play style.

Class and arsenal overall balance fit together well, with each of the Assault, Scout and Support classes offering a unique blend of weaponry and special abilities to provide for both experimentation and effectiveness. Both the crowd control arsenal of the assault class and the scout’s array of sniper rifles feel a little underpowered compared to the shotguns of the support class, but not enough so to throw off every encounter. As with all modern shooters, guns feel and sound lighter than what would truly satisfy, but targeting and recoil are solid across all gun types.