That next-gen polish comes with a wait 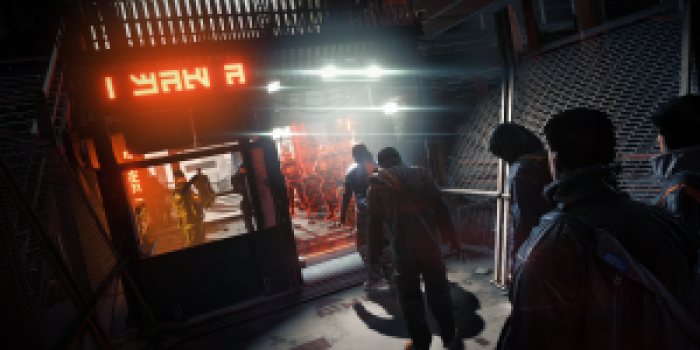 Above: Those pretty views come with a lot of in-game loading time

Even with all of the god rays and water effects, Killzone: Shadow Fall is not a perfect visual package. Dust particles flow charmingly through the air up close, but from a distance look like a hive of buzzing insects. And I did notice a few occurrences of texture pop in and clipping, with silent (thick, white) rain falling inside more than a few storage containers. Most NPC extras are on the wrong side of the uncanny valley, with Kellan’s father in the prologue looking particularly like a spooky meat puppet. Thankfully, both creepy NPCs and the occasional lip-sync gaps fade from memory once Shadow Fall hits its stride toward the six-hour mark.

More problematic, however, is how these shiny vistas and garish lighting effects come at the cost of multiple, obvious loading gates within each level. The rendering portions of a stage are frequently locked behind computer panels that need to be hacked or prolonged introductory segments that you can’t skip for the first half of their runtime. Combined across the average 10-hour playthrough and you’ve got a decent chunk of hang time.

The story is a step back

Above: Garfield is pissed.

With the name Killzone comes the expectation of more engaged narratives than most in the action or sci-fi shooter genre. Beyond the inherently empathetic plight of the Helghast (a homeless race of once-proud warriors backed into a corner), previous entries have cast memorable (if not likeable) protagonists into blockbuster conflicts. Shadow Fall’s role in this saga is a bit rushed by comparison.

Set 30 years after Killzone 3, Shadow Fall’s intent to depict a nuanced theater of war is readily apparent, just not effectively executed. Largely concerning the resettling of Helghan refugees on the planet of Vetka (separated by a Berlin Wall allegory that’s practically ignored) and a subsequent cold war, the grand machinations of war are underwritten in favor of overwritten characters.

Part of it is the problem inherent with delivering story through game segments that prioritize visual flair over plot coherence. Kellan is completely ineffective as a lead or audience stand-in (a point even brought up in a taunting villain monologue), and few characters endear themselves at all. Audio logs and dossiers provide a consistent ground level perspective on the conflict, but they amount only to scattered testimonials or overly dark memoirs to a war players are never drawn into.

Aside from falling back into the drudgery of portraying conflicted soldiers acting out orders from fatally stubborn and/or corrupt commanding officers, the story is simply set-piece fodder. Terrorists enact grandiose plots on the most camera-worthy city infrastructure, so supporting characters can reveal they were not as good as we thought by using grotesque weaponry we didn’t know they had. Stock revelations lead to obvious red-herrings, and the whole ship comes crashing down with half-hearted war poetry on the nature of strength and culture. A few characters make a minority of cutscenes worth watching, but most of you should just keep waiting until the next level loads so they can skip to it.

Above: Beware the stealth sections

Shadow Fall is not built for stealth; the level layout and complete lack of an indicator for the enemy’s field of vision makes the occasional quiet sections frustrating. At any point in which you’re not pacing around waiting for a narrative beat to finish, you can scan for hostile activity. It acts more like an advanced radar than, say, Batman: Arkham series’ Detective Mode; holding right on the D-pad for too long will overload the scan with feedback loud enough to alert everyone in the room. It’s a nice balance to try to keep, but don’t expect to be able to fight more than a couple Helghast before having to find cover.

And then we have the few free fall segments. The area in which you plummet through the air are so cluttered that you’ll spend most of the time spent racing downward spamming the air brake to avoid another collision on the pixel-wide edge of a piece of debris. There are little more than two scene changes, but the stubborn controls make for a frustrating and wholly gratuitous bit of gameplay filler. 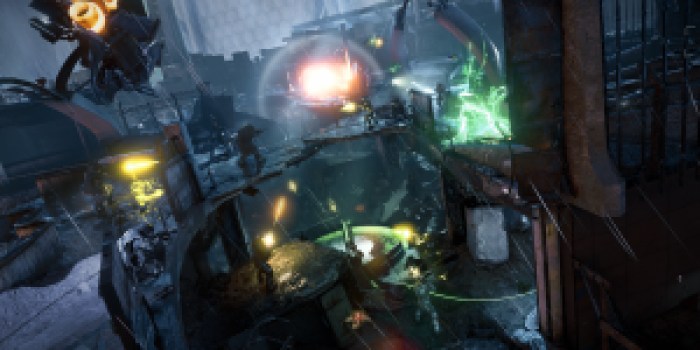 Above: What’s new is either not worth the time, or too dependent on player creation.

What is new in Shadow Fall’s multiplayer is either problematic or dependent on player creation. The Capture and Connect mode, for example, demands that a team take hold of a majority of five points on the map, each starting out with two. Without the ability to capture points out of sequence (ranked A–E, with C up for dispute at the start), the balance of the match seems to perpetually favor those first to capture the midpoint.

Featured warzones, Shadow Fall’s most hyped multiplayer addition, looks to add a cyclical replayability by enabling players to customize maps and matches in hopes of being selected for prominent display by the developers. Players have full control over the field conditions — think things like classes, weapons, and player health or which mission objectives and victory measurements are in effect. I played two maps from Guerrilla Games: a slower, sniper-based affair, and the other being 16 players with shotguns and a 1-second spawn time.

The appeal of these modes, assessed prior to community engagement, feels limited. While there is a lot of fun to be had in re-creating Goldeneye 64’s The Man with the Golden Gun Mode with Killzone assets, there is an inevitable shelf date to player-creativity when there is no control over in-game assets or weather conditions. Swapping out arsenal allowances and spawn times will provide a sizable amount of extra value, especially to creators experienced in creating balanced campaigns, but it won’t take long for the available options to feel like window-dressing. Surfing static menus for the optimal combination of rules and conditions, however brief the process can be, will likely not hold up long either. For players just looking to take part in the labors of others, there is considerably more potential.

Above: Shadow Fall is eye candy in every sense of the word.

Killzone: Shadow Fall is a pretty game, gorgeous even. But the demand for moments to punctuate trailers or demos forced a sacrifice of story that it never quite recovers from. The OWL will find its place in history as one of the few controller-based mechanics to actually entertain, while the time spent in free fall may make players actually consider a plummet-related death. You find a stride in the minute-to-minute gameplay before drudgery sets in, and the multiplayer suite remains solid, if with a few new tenuous bells and whistles.

The end result is a game that is worth playing, but hardly a seller of systems: an average soldier in an above average unit.

Killzone: Shadow Fall is a launch exclusive to the PlayStation 4 that releases Nov. 15, 2013. The publisher provided GamesBeat with a digital copy of the game for the purpose of this review.