Lindsay Lohan is no Kim Kardashian.

Late last week, actor Lindsay Lohan, often the subject of gossip magazine stories, jumped into the world of mobile games with Lindsay Lohan’s The Price of Fame from developer Space Inch. The app is out now for iOS and Android, and it is all about collecting fans and shaping your celebrity persona. If that sounds familiar, that’s because it’s pretty close to what developer Glu Mobile did with its game Kim Kardashian: Hollywood earlier this year. Lohan’s game is even a reskin of Space Inch’s Make It Rain, just like Kim Kardashian: Hollywood is a reskin of Glu’s Stardom: Hollywood. The big difference between the two is that while Kardashian’s game immediately shot to the top of the download charts, Lohan’s app has not. Mobile gaming is expected to generate more than $21 billion this year, and Kardashian’s game has already made hundreds of millions of dollars by appealing to the celebrity’s fans.

Lindsay Lohan’s The Price of Fame went live Friday. The app debuted at No. 401 on the iPhone download chart in the United States (according to App Annie), which is typical for a new release. Kim Kardashian: Hollywood, which hit iOS and Android on June 26, debuted at No. 426 on the same chart (App Annie). While the two apps got off to a similar start, they diverge sharply on day two. 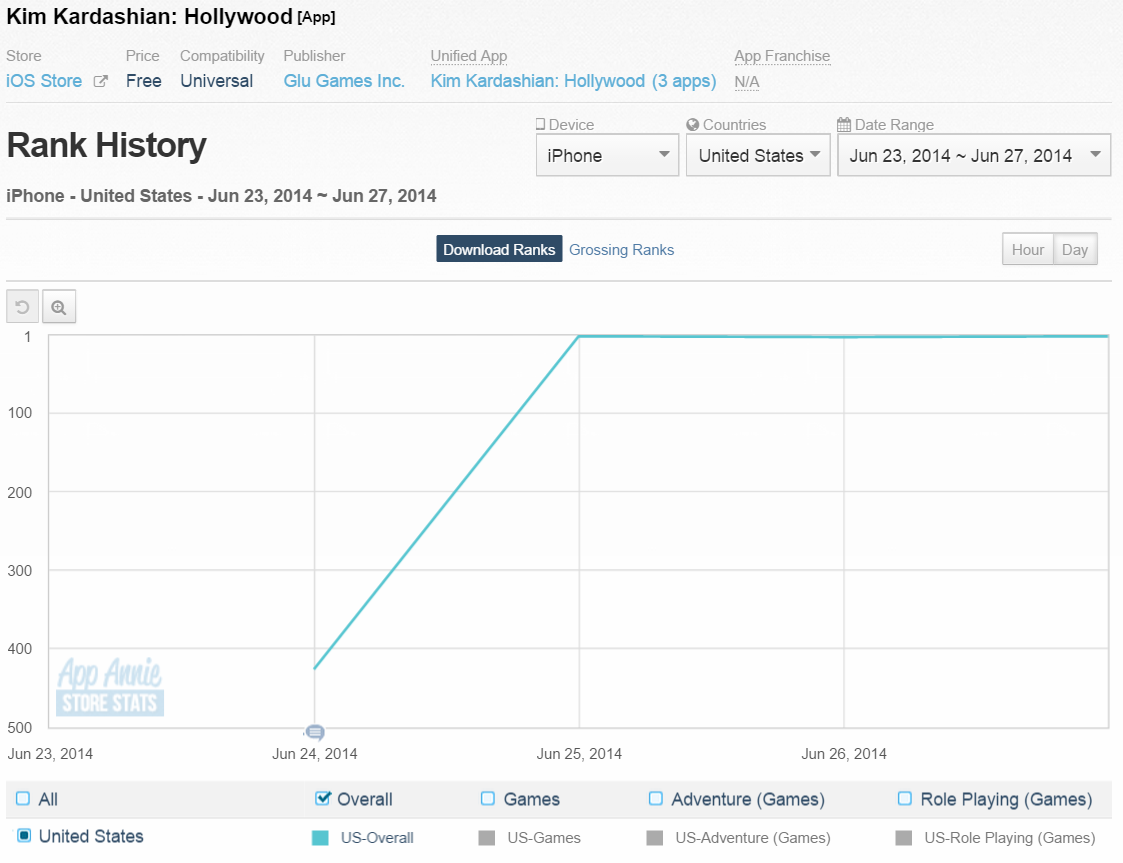 Above: Kardashian’s game immediately shot to the top of the charts. 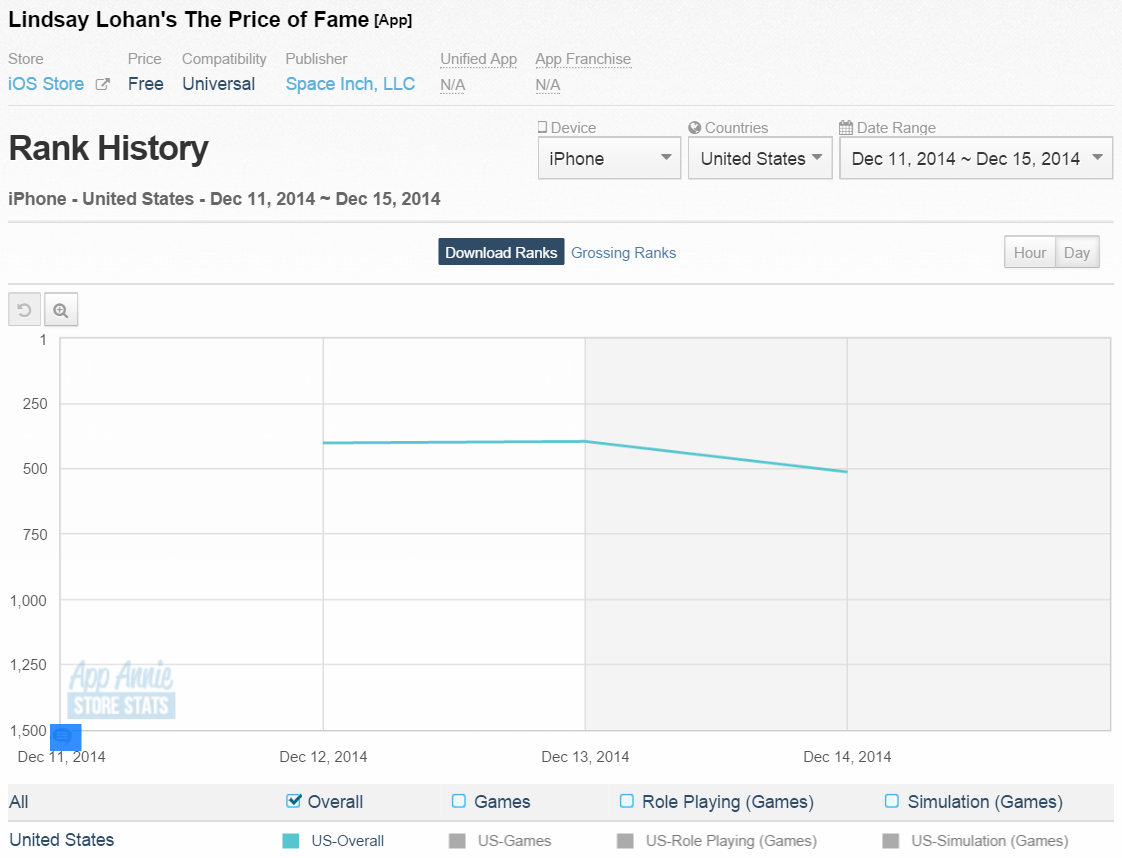 Above: Lohan’s game is already starting to trend downward.

After one day on the app market, Kim Kardashian: Hollywood jumped up more than 400 spots to No. 2 on the download chart. On its third day, Kardashian held strong at No. 3. Lindsay Lohan’s The Price of Fame, however, only jumped from 401 to No. 395. Then, on its third day, it slid all the way to No. 512.

Kim Kardashian: Hollywood has gone on to make millions of dollars since its debut. The free-to-play game already has more than 5 million installs on Android alone, and analysts were predicting the game should make $200 million through its first 12 months of release. Its success has led to a number of other developers looking to celebrities for endorsements.

“[Kim Kardashian: Hollywood] is expected to trigger a run on celebrity-based mobile and social games,” SuperData chief executive Joost van Dreunen said in October. “So far, publishers like Zynga have been aggressively licensing slots games that feature well-known television series and films, like Sex and the City and Terminator. Instead of this blanketed approach, however, a targeted strategy and support of a single celebrity is proving highly effective.”

But Lohan’s first few days suggests that not every celebrity endorsed game will get a viral bounce to the top. One of the primary reasons that Kim Kardashian: Hollywood flew to the top of the charts is because of Kardashian’s huge and engaged following on social media.

Kardashian has more than 26.4 million followers on Twitter. Lohan has around 8 million. But more important, people talk about Kardashian much more than they blab about Lohan.

Above: Kim is far more topical than Lindsay.

It makes sense that developers and publishers would look to Kim Kardashian: Hollywood and try to re-create that success with another celebrity, but the early lesson looks like the level of success is going to depend on which celebrity you get.

Space Inch and Lindsay Lohan are not the first games trying to ape Glu and Kardashian’s model. Developer Fun Games and Entertainment has released two clones of the Kardashian game called Ariana Grande Hollywood and Selena Gomez Hollywood. Grande is a singer and Gomez is a singer and actor. But both games have only netted download numbers in the thousands.

And then there is poor David Hasselhoff. The Baywatch actor stars in a $1 app on iOS called Hoff Zombie Beach, and it isn’t even on the charts in the United States. But I hear that Germany loves it.