Activision Blizzard’s King mobile game division is launching a TV show based on the Candy Crush Saga mobile game this summer, and it is bringing TV show host Mario Lopez into the game.

King is also launching a series of in-game events within Candy Crush Saga to promote the live-action TV show on CBS. It’s an example of transmedia, or a single intellectual property spanning different media such as TV and games. And King wants the cross promotion to work in both directions. King has some built-in advantages as it launches the TV show, since the game has been played more than a trillion times, with an average of 20 billion game rounds being played every month across the Candy Crush franchise.

Mario Lopez, host of the new CBS show which airs weekly starting July 9, will be transformed into a ‘Candified’ in-game show host in Candy Crush Saga. Mobile game players will get a series of challenges to complete each week for their chance to win exclusive in-game rewards.

“The Candy Crush games continue to be loved and played by millions around the world every day on their mobiles, and it’s incredible now to be breaking out into other areas of entertainment,” said Sebastian Knutsson, chief creative officer at King and executive producer of the Candy Crush TV show, in a statement. “It’s hugely exciting to see the Candy Crush mobile game adapted into a live action television game show and, what’s more, for the first time we’ve been able to blend the fun and action seen on the small screen with brand new in-game challenges. These special events in the Candy Crush app will be the perfect companion when you’re tuned into the game show fun.” 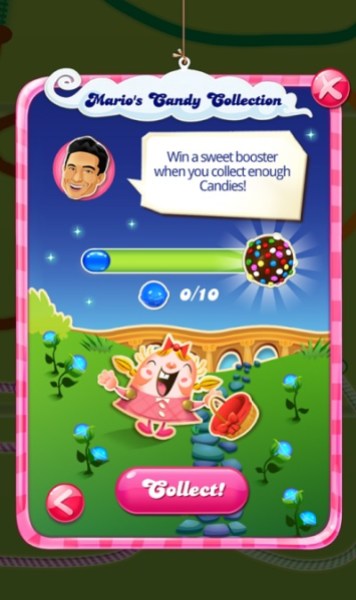 Available to players on iOS, Google Android, Windows, and Amazon, the series of live in-game Candy Crush events will be running for a period of 48 hours every weekend for the duration of the 10-week television show, starting on July 7.

And Candy Crush Soda Saga players can choose between four teams — these will feature the show’s contestants from that week. Each team is then set a target, such as collecting as many green candies as possible. Players continue with the game as normal, while an in-game tracker keeps track of how they’re doing. The winning team can then pick between a range of different prizes.

For Candy Crush Jelly Saga, players will face a time challenge to collect as many cupcakes as they can. If players reach the goal within the time limit, they are rewarded with a gift.

Each week, the Candy Crush television show will see four teams of two battle it out in the Candy Crush arena and compete on a supersized, interactive game board. Players will use their entire bodies to swing, slide and swipe to match candies. The top two scoring teams of the night progress to the ultimate candy clash, with the chance to win a $100,000. The first team to score 50 matches wins.