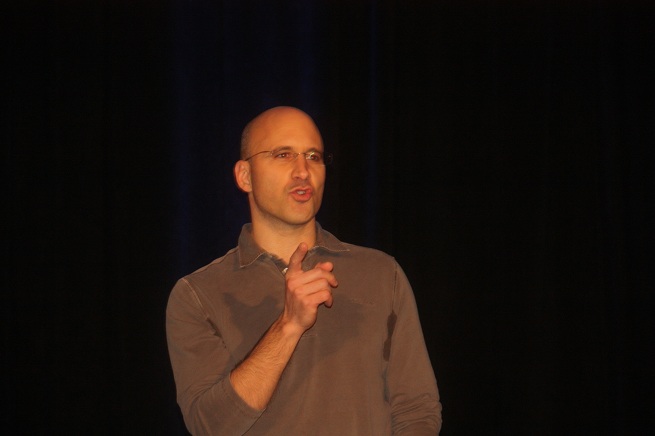 SAN FRANCISCO — Two years ago, King.com wasn’t on Facebook, and its web-based games were in danger of becoming ghost towns on the web. But the London-based company now has the largest game on Facebook in Candy Crush Saga, and it is growing quickly on mobile platforms as well.

Since Candy Crush Saga launched in November on mobile, the number of users has surpassed 10 million daily players. And the amount of activity on the Facebook desktop version has increased since the launch of mobile. King.com chief executive Riccardo Zacconi [above] said today that this was because the cross-platform nature of the game made it more appealing to play it on multiple platforms, including desktop. He made the comments at Facebook’s seminar on games at the Game Developers Conference today.

“We let them consume our content in a seamless, ubiquitous way,” Zacconi said.

While Facebook gaming has its critics, the social network has 250 million of its monthly active members playing games, or one out of every four Facebook users. That number is growing on the desktop as well as on mobile, said Sean Ryan, director of game partnerships at Facebook, in a GDC  talk today.

Zacconi said that Facebook gives game developers the advantage of knowing the identity of a player, the social graph of that individual’s friends, and discoverability. That is especially important on mobile, where it’s easy for a game to get lost among hundreds of thousands of titles on app stores.

Zacconi said the web is still important, as it is where King.com has more than 300 games and lots of customers. Facebook desktop is also important because the company can launch social versions of its web games there and work out the bugs, using constant analytics and user feedback to tune the games so they work optimally. Then it launches a mobile version of the game.

Games product manager George Lee said Facebook is making improvements to strike the balance between respecting those who don’t play games on the social network and promoting virality of games. One example is that, starting tomorrow, Facebook will turn on a discovery feature called “game collections” that shows a library of games at a glance for any given game-savvy Facebook user.