Television doesn’t seem like the kind of place that a major mobile game producer would look to acquire new players, and that’s typically true. But that’s not stopping developer King from successfully putting the old medium to work for its own ends.

Last weekend, Candy Crush Saga developer King began running ads for the social puzzle game on Japanese television, according to industry analyst Serkan Toto. The commercials feature actress Mikako Tabe playing the game and as candy rains around her in the real world.

“Advertising mobile games on television doesn’t sound intuitive at this point in time, given the immaturity of the mobile gaming industry, the now less important position of TV as a marketing channel, high production costs for ads, inability to track effectiveness, problems in attributing user acquisition, and, of course, the costs of running ads on TV in the first place,” writes Toto in a blog post. “In Japan, however, mobile content has been advertised on national television for years.”

Japanese games like Puzzle & Dragons and Quiz RPG have previously found success with TV marketing campaigns. King is the first mobile-gaming company from outside of Japan to employ this tactic, and this is working for it as well.

Following the first airing of the commercials, Candy Crush Saga has jumped from not even placing in the top-100 most-downloaded iPhone games Friday to the No. 1 position by Wednesday. 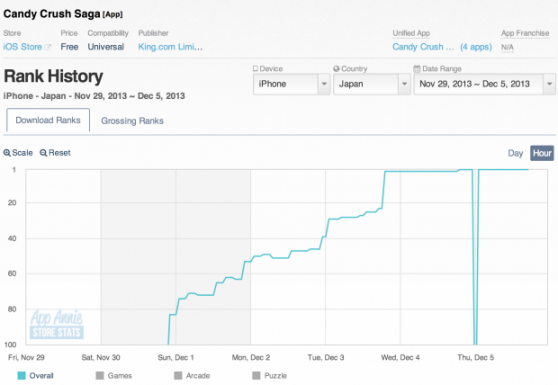 Above: Candy Crush Saga’s performance on iPhone over the last few days.

On Android, the game jumped from No. 83 on Nov. 30 to the No. 23 on the most-downloaded game on Dec. 4. Neither versions of the game have seen large spikes in terms of revenue despite the influx of new players, but that’s not unexpected. It’s difficult to quickly move up that chart, and it also takes a while to convert new people into paying customers on mobile.

King will only know if this investment paid off if does see an increase in revenue that is sustainable. For now, it’s off to a good start. Puzzle & Dragon developer GungHo Online Entertainment ran ads for that game in heavy rotation for months before pulling back on the advertising budget.

This isn’t King’s first foray into television advertising. It currently runs some limited 15-second spots in the U.S. for Candy Crush Saga and Pet Rescue Saga. For example, it ran the ad below today during A Dog Named Christmas on The Hallmark Channel, according to iSpot.tv: