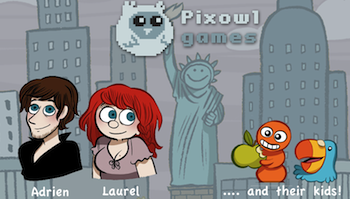 It all started with a snake.

In 2010, independent game designer Adrien Duermaël set out to make a simple mobile game that would take advantage of smartphone accelerometers and that anyone could play. The result was Doodle Grub, a game where you direct a snake to eat apples and avoid enemies just by tilting your phone.

Lucky for Duermaël, he’s married to one of France’s most famous comic book illustrators. His wife Laurel was more than happy to supply charming cartoon graphics for the game.

“With the combination of accelerometer controls and the cartoon graphics from Laurel, we had the first version of the game,” Duermaël says. “Then we regularly updated it, adding new themes — each with its own enemies and obstacles — multiplayer game modes and more.”

The couple, which now collaborates on several similar projects, is busy porting Doodle Grub to Windows Phone 7. It’s already up and running seamlessly on Zune devices, Duermaël says. To manage Doodle Grub updates and his other projects, he’s founded mobile game studio Pixowl, which has taken off in just a few months.

While the bulk of Duermaël’s experience lies in video games, the mobile platform is definitely growing on him. He says phones are 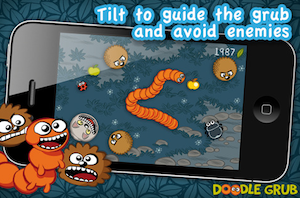 the perfect devices for casual games, allowing users to carry a game with them and play for short periods of time. It’s also much easier for him to distribute updates rapidly and easily, keeping users satisfied.

“We think mobile phones have made possible the creation of games for the whole family as never before,” he says. “We love to think parents and kids can compete using their phones. They bring people together more than other platforms.”

Duermaël and Laurel are especially interested in the future of tablet games, because they may one day become central to family life — much like board games. In the future, they want to create more games that players can experience with the people around them.

In the meantime, they are focusing on supporting their two most visible products — Doodle Grub and a new game, just released for iPhone and iPad, called Safari Party. This title weaves together arcade and puzzle elements familiar to Bejeweled fans, with colorful graphics provided by Laurel, and bonuses and comical achievements, to make it just as addictive as its sibling game.

The duo also has a long-term vision for Pixowl, founded three months ago with serial-entrepreneurs Arthur Madrid and Sebastien Borget. The studio is growing fast, having just opened a new branch in Buenos Aires with a fresh team of developers.

“Our dream is to move to California,” Duermaël says. “When we have more funds, we will accelerate our development. We believe in combining passionate, experienced management with a talented development team to make original, fun games for all devices.”