Square Enix made Kingdom Hearts III playable for the first time during a world premier event in Santa Monica on May 17. Director Tetsuya Nomura said at the event that we’ll learn the PlayStation 4 and Xbox One games’s release date early next month (presumably during the E3 show in Los Angeles).  I got to play two levels from the Disney-inspired action role-playing game; Mt. Olympus from Hercules and a world based on Pixar’s Toy Story.

Kingdom Hearts has been a big series for Square Enix, selling over 24 million games since the original launched in 2002 for PlayStation 2. And fans have been waiting a long time for Kingdom Hearts III. Kingdom Hearts II came out back in 2006. Since then, the series has focused on spin-offs, portable games, and compilations/remasters. 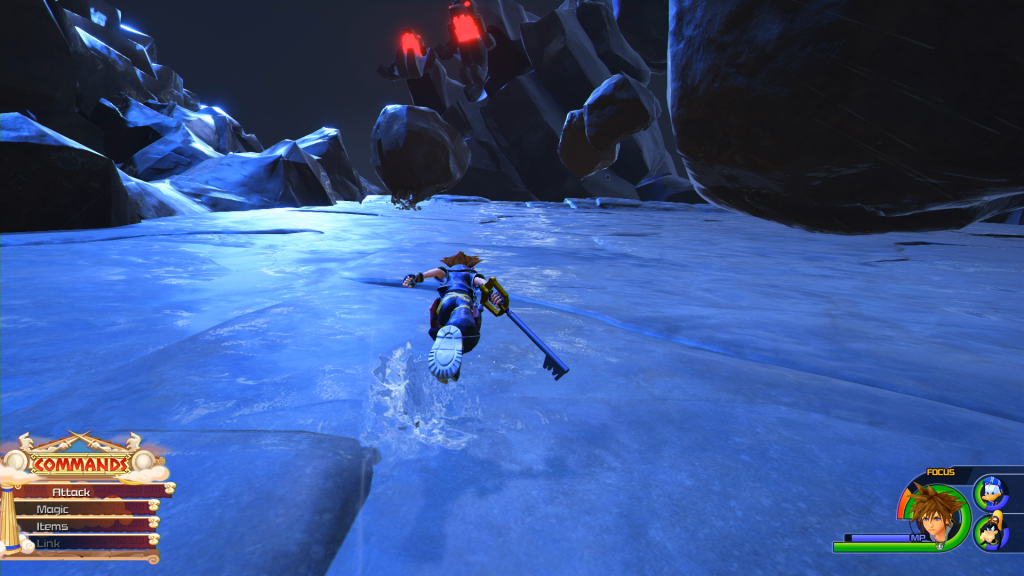 Above: Anything can be a runnable surface if you’re cool enough.

I can go the distance

The first demo took place in Olympus, taking the series back to a Hercules setting that’s also appeared in the franchise’s first two numbered games. This level takes place early in the game, and shows off one of the new traversal mechanics. You can go up to certain walls — indicated with a slight sheen — and run straight up them. In the demo, I sprinted up a cliff while avoiding boulders thrown from above by a Rock Titan. It makes getting around in Kingdom Hearts III exciting without depending as much on floaty platforming.

Once I got up the mountain, Donald Duck, Goofy, and I had to fight the Rock Titan. The basics of combat felt familiar. I focused on spamming regular attacks while occasionally dodging and using magic spells. But then the UI prompted me to press the Triangle button (I played my demo on a PlayStation 4, although the game was also running on Xbox One) to use a flashier attack. Sometimes this changed my form into something more powerful, sometimes I teamed up with Donald for a special move, and (most excitingly) I summoned a magical Big Thunder Mountain-style train that flew around the Titan’s head.

These attacks were all beautiful, flashy, and exciting, even if I wasn’t exactly sure how I was triggering them. Above: Having a ball.

You are a toy!

The other demo sent me to Toy Story. While past games didn’t include any Pixar worlds, Kingdom Hearts III has Toy Story and Monsters. Inc. This was a more narrative-focused experience. Thankfully, it didn’t just retell the story of the film — something that would annoy me in past Kingdom Hearts games. Instead, Woody and Buzz are looking for lost toy friends when your team shows up in their world disguised as plastic figures.

It’s charming to see the beloved Toy Story characters interact with Donald, Goofy, and Sora (the player character). Square Enix wouldn’t tell me if they got the original voice actors back, but I was sure it wasn’t Tom Hanks or Tim Allen. That said, the sound-alikes were convincing enough, and Ham and Rex actually do sound like the originals.

Sound aside, these characters look close to the movie originals, an incredible achievement for a game running in real time instead of a pre-rendered film. And even in this early state, Kingdom Hearts III runs smoothly with no noticeable technical issues, while lighting and particle effects give battles some extra graphical oomph. 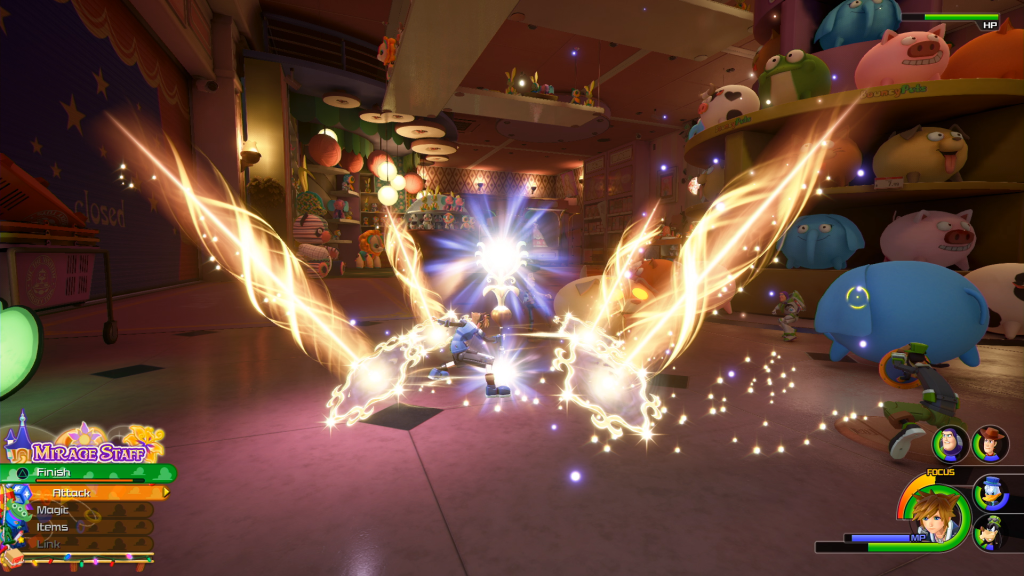 Above: Combat is crazy.

In this demo, combat got even crazier. New in Kingdom Hearts III, you can switch between Keyblades (Sora’s weapon of choice) during battle. Each Keyblade gives you access to different transformations and special moves, which also show up as Triangle prompts. The Keyblade from the Tangled world can summon a giant tower, while the one from Monsters Inc. can give you a special claw weapon.

I also had access to Summons … er, Links. It’s a new name, but it works like Summons from past games. You call upon Disney characters to help for you a limited time. The demo included Wreck-It Ralph, who appears out of an 8-bit arcade screen and then deploys blocks around the level before making them explode, and Ariel, who swims around creating puddles that turn into destructive water fountains.

All these abilities look beautiful, cinematic, and flow wonderfully during combat. My favorite was a team-up attack with Woody and Buzz, where Sora and them jump on a rocket and fly through the air. You can actually control the rocket as it soars through the level before finding a target to fling it at. 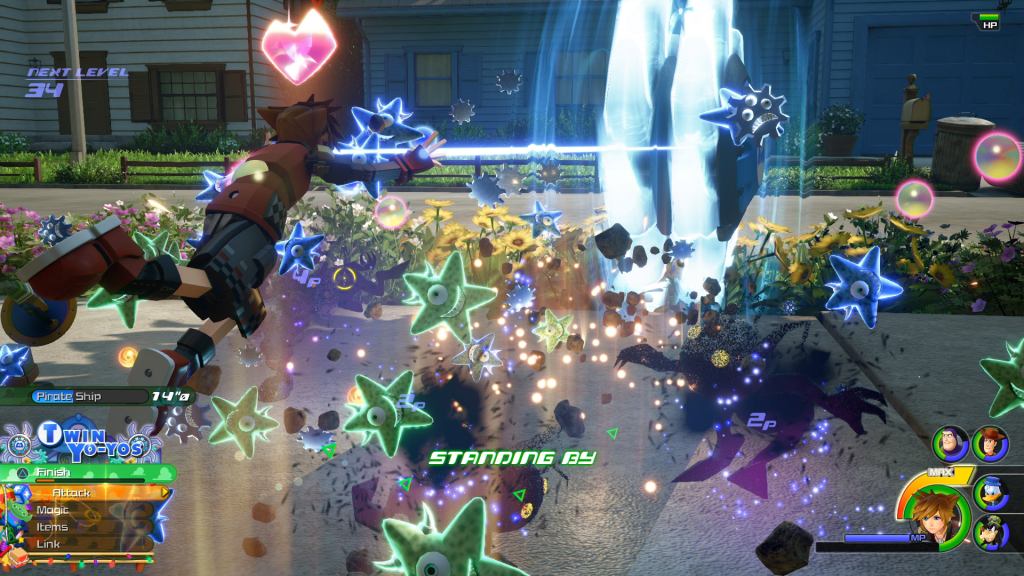 Above: Combat gets really crazy.

All of those summons, form changes, team-up attacks, and weapon transformations look flashy, but they also happen a lot. I’m worried that they could overwhelm basic combat. Flying a rocket around and summon giant towers is cool, but I also like swinging my Keyblade and using simple magic. When I played, some kind of Triangle prompt was almost always available. The Toy Story level even includes a section where you can take control of giant robot toys. Again, it’s neat, but it’s a lot.

I was also concerned about the pacing in the Toy Story level. Lengthy, talky cutscenes are the norm for the series. If you love the franchise as much as me, you even look forward to them. But I wanted to spend more time fighting. Often I’d only have a single battle between cutscenes. I felt like I spent more time listening to Woody and Buzz talk than I did fighting with them. Above: He’s gonna build it … and then wreck it.

But not too concerned

Both of those worries could end up not being big issues in the final game. And even if the combat remains as chaotic as it was in the demo, it’s still fun.

More importantly, Kingdom Hearts III accomplishes what the series does best by bringing Disney’s best characters together in an epic adventure. I fell in love with the original Kingdom Hearts because of the novelty of having Donald Duck in a Final Fantasy-style adventure. Seeing Wreck-It Ralph and Buzz Lightyear help me destroy minions of darkness fills me with the same glee the series gave me back in 2002.