GamesBeat: A little like Zynga.com, or is this different in some ways? 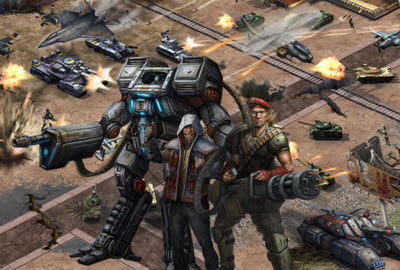 Harbin: It’s different. There will be no connection to Facebook whatsoever. We’ll be using our own game platform. Primarily it’s going to be used to drive traffic from non-Facebook sources. We want a destination for our kinds of games, where we don’t have to balance the needs of other games like Facebook does. At Facebook, the project managers there have to balance the needs of gamers with pictures and status updates and things like that. We just need to optimize the game experience.

GamesBeat: You’re also going to try to do more 3D graphics, more intense games, and synchronous play and up the ante on this?

GamesBeat: Normally, you’d need something like a console to do this. What’s making this possible on the web?

Harbin: A lot of it has to do with platform. We’re not necessarily a Flash shop. We’re always going to choose the best tool for the job. If a better technology is available, we’re going to leverage something else. Maybe HTML 5 might get to the point where we can deliver the appropriate amount of quality and fidelity. Flash 11 is opening a lot of doors as far as hardware acceleration and things like that.

GamesBeat: Flash 11 came out in the fall, and it did introduce the idea that you can tap the 3D graphics hardware on any computer that it’s running on.

Harbin: So there is definitely something there. Flash 11.3 is great. We’re waiting for 11.4, which is supposed to be launched for the public in September. That’s when we’ll launch our first 3D game, late September or October.

But at the end of the day, it’s about the intersection of accessibility and technology. Touching on what Mitch [Lasky of Benchmark Capital] was saying, we’re in the middle of a massive disruption of platforms and business models in publishing. We’re trying to come at it from all over the place. Especially there on the platform side. If you look at the history of disruption across other industries, taking music for an example, accessibility certainly trumped fidelity with the iPod. People put away their high-end stereos and CDs and whatever. They were willing to sacrifice an amount of fidelity for accessibility.

But the good news is, we certainly nailed the physical accessibility piece, where players can reach us through their browser. Fidelity is definitely lacking, but with Flash 11 and other tools on the horizon, we’re going to be able to absolutely rival downloadable PC and console titles in the future. 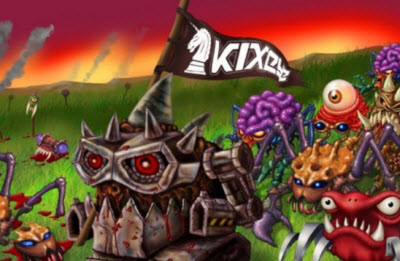 GamesBeat: Riot Games’ League of Legends has started a disruption of the console business with free-to-play games. But they’re downloadable. They have very big downloads. So you’re skipping the download now.

Harbin: What if League of Legends was in the browser? That’s disruptive. We need to do that.

GamesBeat: So free-to-play, web-based, no download games? Look out, consoles. Then what happens? There’s a whole new ballgame, right?

Harbin: Then what happens? I don’t know. Ask us in five years.

At the end of the day, we just want to make great games. I think that some of the old guard in this industry has been resting on their laurels, and they haven’t really had the same passion for quality that some of these new companies have. We want to set ourselves up so we have a platform to produce new, great, exciting games. We don’t want to have any publisher in our way. We don’t want to have anything in our way that provides friction between us and in the user. Right now, we’re in the middle of removing all of those barriers.

GamesBeat: With the switch to 3D here, are you having to scale up the size of your teams until they rival the size of console teams? 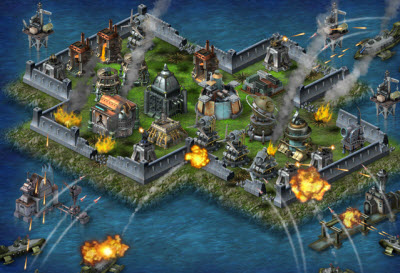 Harbin: Sure. Backyard Monsters was launched with three people, Battle Pirates was maybe around 12 or so. It’s not that much larger. Our game, which is code-named Divine Intervention, launches in October. It’s our first 3D game, and that has a team of about 15 people right now. I don’t see it growing much larger than that. But again, with the tools available these days to game producers, it makes things pretty efficient. You do not need 200 people on a game.

GamesBeat: Why would people still want to buy $60 console games after this? Does anybody have a question from the audience?

Question from audience: With the strength of MMOs in China, Japan, and South Korea, how do you view your opportunities in those markets?

GamesBeat: You picked up a team in Australia. What’s your strategy behind this move?

Harbin: Yeah, we acquired a small developer there, but it has nothing to do with attacking another market. The Australian market has a lot in common with our market here. We’ve been serving countries in that region for a while. It was purely a talent acquisition. They did bits of the Total War series. 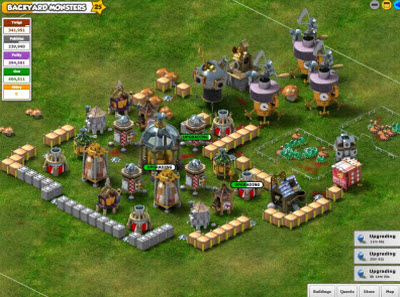 GamesBeat: So real-time strategy games are a likely target for you in the future?

Harbin: RTS has always been a passion of mine. It’ll continue to be something the company focuses on. Two of the four titles that we’re working on are going into the RPG realm. Again, we’re starting from the pillar of RTS, and now we’ve started on RPG and something else.

Harbin: Sort of. The mobile effort is really a test. We have a mobile version of Backyard Monsters coming out relatively soon. But it’s really just dipping our toe in the water. Part of finding the intersection between accessibility and fidelity relies on creating an immersive experience, and when you have a small form factor device like a cellphone, it’s hard to develop a truly immersive experience.

Tablets are something entirely different. Tablets are a great gaming device, and we’ll probably have a version of our first RPG in tablet form shortly after the initial launch.

Harbin: I’m sure there will be some friction there, but it will certainly be less friction. I think a lot of gamers hear the term “Facebook game,” and they think Farmville. When they hear “browser game,” they think of a more blank canvas. There are certainly other competitors I’m aware of that are successful in browser outside of Facebook. Companies like Bigpoint, they’ve been doing this for a very long time. And certainly a lot of the companies in China, Japan, and Korea as well. So I’m not as worried.