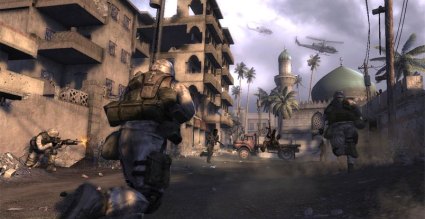 After an outcry in the U.S., Japanese video game maker Konami has decided to cancel its Six Days in Fallujah video game.

The game (which we covered a couple of weeks ago) aimed to reproduce the bloody street battles between U.S. soldiers and insurgents in Fallujah, Iraq, in 2004. Thousands of people, including many Iraqi citizens, and 38 U.S. soldiers were killed in the fighting. The outrage over the game showed that even video games can hit too close to home, despite the fact that realistic war games based on history are a staple of the industry.

The freshness of the combat, the emotions around the lynching of U.S. contractors in Fallujah, and the fact that there are still people dying in Iraq clearly contributed to the controversy. Families of soldiers, military retirees and citizens groups in the U.S. and Europe criticized the game as being in poor taste and insensitive.

Konami officials said in a statement,  “After seeing the reaction to the video game in the United States and hearing opinions sent through phone calls and e-mail, we decided several days ago not to sell it. We had intended to convey the reality of the battles to players so that they could feel what it was like to be there.”

The game was being developed by U.S.-based Atomic Games, which showed off scenes from the game at a Konami event this month. The game was scheduled to debut in 2010. Atomic had the help of soldiers who fought in Fallujah, but critics apparently ignored that sensitivity.

I would argue that the loss of this game isn’t a tragedy. Games often blur the line between reality and fantasy, but there are plenty of other ultra-realistic games out there that offer a similar realistic experience and yet clearly stay on the side of fiction. Those games include titles such as the Battlefield series, Full Spectrum Warrior, and Call of Duty: Modern Warfare. The companies made a mistake here in failing to anticipate the depth of emotion surrounding fresh events where real people died in horribly public ways.

Even though Atomic Games has a reputation of doing games that are respectful of the sacrifice of soldiers, this game was particularly controversial, since soldiers in the game had to decide whether to shoot civilians.