Jim Greer, the chief executive of Kongregate, is greedy for games. His web site already has more than 8,000 games created by users and independent game developers. Now he has a scheme to get even more games on the site. 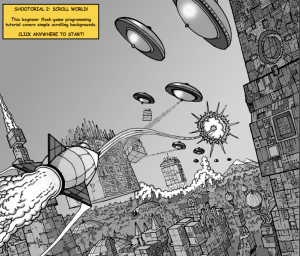 Today, the San Francisco company is unveiling Kongregate Labs, a section of its site sponsored by car company Scion that teaches gamers how to create their own games. Kongregate Labs will have nine detailed tutorials that show users how to create basic shooting games in Adobe’s Flash format, the lingua franca of both the web and simple arcade-like games.

It may seem like a ridiculous idea for Kongregate to add more free, ad-based games. And it costs money to do this work, which Kongregate has been doing since the spring. But the company has plenty of cash, having raised $3 million in April from Amazon’s Jeff Bezos.

And this is a “long tail” company, or one like Amazon.com that attracts big crowds precisely because of its huge selection. It’s in Greer’s own enlightened self-interest to spend money to train gamers so they can create his future products. 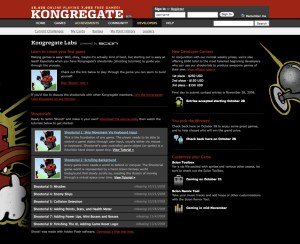 Kongregate has attracted 4.5 million monthly visitors who play more than 22 million games each month. (It competes with sites such as Addicting Games and Miniclip). The players come to games which range from simple games made by hobbyists to sophisticated titles by professional developers looking for a break. My kid loves “Platform Racing 2,” a physics-based side scrolling game where you race against the clock to complete an obstacle course. It’s for casual audiences of all ages and genders.

The new sub-site isn’t just about generating shovelware, or junk games. Rather, Greer believes that the best way to uncover new talent is to give games created by newbie game developers a chance to live or die. The bigger the variety of games, the better the chances of having a big hit. The best games float to the top because they’re sorted based on the number of times they’ve been played and player ratings. And on the web, shelf space isn’t a problem like it is in retail stores.

Greer, who started programming games when he was 12, remembered how hard it was to come up to speed in the good old days. But now, simple tools such as Flash can automate a lot of the tasks. Others have discovered this too. Microsoft has launched PopFly as a tool for amateurs to create simple games. Electronic Arts’ SimsCarnival site has a series of menu-based templates that help people to create their own games. One of Sony’s big titles this fall, “LittleBigPlanet,” lets gamers create their own levels.

The more free form the games, the more you have to understand coding to make them. Earlier this month, Digini launched tools that are aimed at broadening the number of game developers out there. Sim Ops Studios, a startup that debuted at DEMOfall 08, has a game-building tool that friends can use to design pieces of the same game simultaneously. And Microsoft is launching a community-created games section on its Xbox Live online game service later this month. Those games are built with its XNA Game Studio tools, which are versatile but highly complicated for developers to learn.

Given that spectrum, Greer says that his offering is somewhere between the simplicity of the SimsCarnival site and the more complex XNA Game Studio tools. Will fashioning games ever be as simple as uploading videos to YouTube? Greer believes that games will alway require a lot more skill, but he believes that the democratization of game development will continue to happen.