As part of the “indie” movement, Kongregate has been trying to do for user-generated video games what YouTube did for user-created videos.

The company is announcing today that it will launch seven new games within a couple of weeks on Facebook, a move that represents its first expansion beyond its current web site, which currently gets about 3 million unique visitors a month. The company expects to hit 10 million by the end of the year. 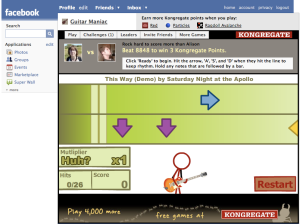 The strong traffic is validating for Greer, who said that many professional game developers and game company executives were skeptical when Kongregate first debuted. Other companies, such as Microsoft through its Xbox 360 XNA Creators Club program and Nintendo with WiiWare, are also embracing user-generated or “indie” content, but Kongregate has a lead.

“We’re not quite a mass market yet, but people are coming around that this is a good idea,” he said.

It has also raised $3 million from Amazon.com CEO Jeff Bezos. The investments from Bezos Expeditions will be used to fuel the company’s expansion to new platforms and expand beyond the mostly male audience that plays Adobe Flash-based games at Kongregate.com. Greer said that the company has more than half the cash of its previous $5 million round in the bank and didn’t need a full venture round. He expects Kongregate will be profitable by the end of the year or the first half of 2009.

Jim Greer, CEO of Kongregate, said in an interview today that more than 1,600 indie game developers have uploaded more than 4,000 games to the site in the past 14 months. The company makes money solely from ad revenues now, but Greer said he hopes that new models such as sales of virtual goods will become a part of the business in the future.

On average, gamers spend 59.3 minutes per day at the company’s site, Kongregate.com, comapred to 21 minutes on Facebook and 12.1 minutes on ESPN.com, according to comScore. By extending to Facebook, Greer hopes to expand the audience to players who like challenging their friends to high-score competitions with popular Kongregate titles such as “Dolphin Olympics 2.”

Lastly, the company said it appointed Lee Uniacke — a veteran of the game magazine publishing business at Ziff Davis and most recently head of sales at Viacom’s MTV Networks, including Atom Entertainment — as  Kongregate’s Chief Revenue Officer.