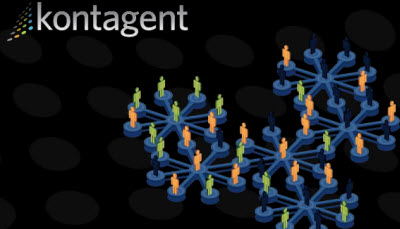 Social game companies such as Zynga consider their analytics — the data they collect about user activity in their apps — to be a competitive advantage. They can take the data, revise their apps, and make their apps more desirable on a daily basis.

Kontagent, which creates analytics tools for game developers, hopes to level the playing field for the smaller guys. Today, the San Francisco company is announcing version 2 of its analytics software. Albert Lai, chief executive of Kontagent, says the much-improved suite of tools will let developers extract more data, putting them on par with market leaders such as Zynga.

“Getting to the highest level of analytics is our goal,” Lai said. Kontagent’s tools are used in games that are played by more than 70 million monthly active users. The company isn’t allowed to talk about all of its big customers, Lai said. But previously revealed customers include Sandlot Games, News Corp., Tencent, ZipZap Play, PlayFirst, King.com, XPD, Gaia, iWin, Wooga, CBS, A Bit Lucky, PopCap Games, GSN, and Tall Tree Games. Frederic Descamps, chief executive of A Bit Lucky, says the Kontagent tools are a necessary part of making a successful Facebook app. 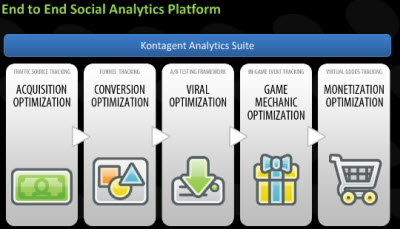 Analytics are a must-have for social game companies because the direct feedback from apps played on social networks gives today’s developers a wealth of data that past developers only dreamed about. In the past, game makers could sample users in focus groups, where users talked about what they did in games. But it’s far more revealing to actually study what users do in games. Where do they drop out? How many of them will work hard to achieve a certain reward? If the analytics can tell developers the answers to these questions, then the developers can immediately redesign the game to remove any obstacles to users spending money.

Kontagent began its work three years ago with a disruptive model in analytics. Traditional web analytics firms such as Omniture charge on the basis of “events” that occur as users click on web sites. But Kontagent charges based on the number of users for an app, not on the number of events that happen, mainly because social apps get much heavier usage than a web site. Kontagent thereby allows developers to keep track of enormous numbers of events that would otherwise bankrupt Omniture-based analytics users. At the same time, Kontagent is offering more analytics data than can be gotten out of free products such as Google Analytics.

Lai said Kontagent’s tools are designed to allow developers to zero in on their “social whales,” or the small percentage of players who spend the most money in social games. With Omniture, Lai says, it’s too expensive to get data on such a small number of highly active users. The new analytics also allow developers to track social events and social funnels. (A funnel basically tracks different actions users can take in a game and how many of them drop out or move forward with each action; some 100 percent of users will try out a game, but after going through a funnel, perhaps only 3 percent will pay real money for an item in that game.) Kontagent lets developers set up tests to figure out which technique for getting users to spend money is most effective. If there is a bottleneck that is stopping a user from spending money, the social funnel analytics tools can be used to identify that bottleneck.

Kontagent has raised more than $6 million in funding from investors including Maverick Capital, Altos Ventures, The Facebook Fund, Extreme Venture Partners, The Hit Forge, and a large group of angels. Lai and Jeffrey Tseng co-founded the company in 2007.

The company’s service has free, low-cost and premium options. Here’s a link to Kontagent’s slides.