The deal is part of Gamevil’s startup support program, dubbed Companion, and it’s part of the Korean company’s plan to make aggressive investments into companies, projects, and talent acquisitions as it expands on the global gaming stage. Gamevil is one of the many mobile companies that have done well in one region and are now trying to expand around the world. The free-to-play company generated $70 million in revenue last year and $24 million in profit. 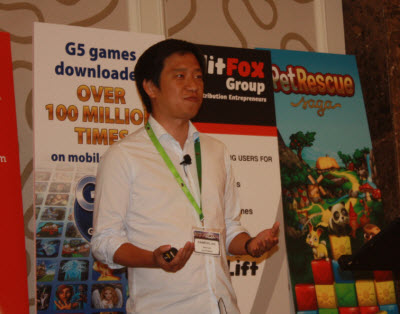 Relax Games’s team includes Il Seung Lee, the former CEO of famous online game, and the developers of NCsoft’s Blade & Soul and Lineage II games. Gamevil made the investment as part of a publishing contract.

“Participating in Gamevil’s startup support program has instilled confidence through its strong development and publishing know-how,” said Il Seung Lee. “The investment will not only strengthen the quality of our games but provide a good measure on how developers and publishers can collaborate together.”

Relax Games’ first title is a social network strategy game that will launch later this year.

Gamevil is a publicly traded company that has had more than 300 million downloads. It was founded in 2000 and is working with more than 70 game studios to publish their games on a variety of mobile platforms, including the fast-growing Kakao mobile messaging system in South Korea. It has 150 internal developers and access to 700 external developers.

Kyu Lee, the president of Gamevil USA, said recently at the Casual Connect game conference in San Francisco that companies with just a small number of mobile games — Supercell, GungHo, and King — are currently beating companies such as Electronic Arts and Gree. That builds a case for focusing resources on fewer games that have a lot of potential.

Lee said the company’s target is $100 million in revenue this year and $30 million in profit. The company is a player in the U.S., Japanese and Korean markets. He thinks that smaller companies need to team up with larger ones because the cost of user acquisition is rising. The rising costs are also why mobile messaging networks such as Kakao in South Korea and Line in Japan are becoming more important, as they can get viral distribution through chat, though at a growing price. Last year, Gamevil published 46 games.

“You need a larger user base to start off,” he said. “The quality bar is also rising. There are bigger development budgets. The gambling companies are coming in. There are fewer indie success stories.”