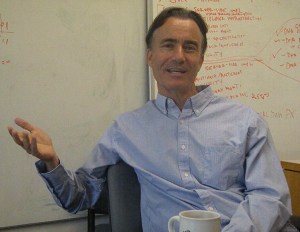 We’ve written about how new developers are enamored with the iPhone. But Trip Hawkins (founder of Electronic Arts) admits that his mobile game company, Digital Chocolate, was late to the iPhone. The San Mateo, Calif.-based company has 350 employees making games for all sorts of cell phones, but the iPhone’s popularity caught it by surprise. Now Hawkins has come back with a vengeance. His company has launched five iPhone games since December and four of them have hit No. 1. That’s no easy feat, considering there are 7,931 games on the iPhone, according to Mobclix. We talked with Hawkins about it at Digital Chocolate.

VB: How do you feel about the iPhone?

TH: The iPhone for us was a spectacularly pleasant surprise. We had no idea it was going to be as good for us as it turned out to be….The first two [games] were Chocolate Shop Frenzy (right) and Crazy Penguin Catapult (below). They were successful on other platforms. The next two were Tower Blocks and Brick Breaker Revolution. There are 35,000 apps [competing on the iPhone]. Thousands are free. To get to No. 1, it’s pretty rare. There is a rotation where something stays at No. 1 for a week or two. The odds are very low. If there are maybe 25 products that have hit No. 1, then your odds are one in a thousand. Penguin was No. 1 through Christmas. Tower Blocks was No. 1 in February. Brick Breaker Revolution made it to No. 1 in April. That’s a mathematical freak. We have now released a fifth game, and a couple of more are coming. The first four games, in less than 100 days, hit 10 million downloads. Our record is like Playfish’s on Facebook games. Our reviews are great as well. 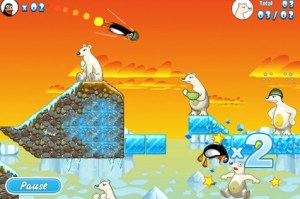 VB: How is revenue?

TH: One of the things we do is calculate revenue of the top players by doing correlations with the revenues on our own titles that are in the top ranks. You look at the rankings, the units sold, and the likely revenues associated with them. With that, you can create the top revenue 100 list. All five of our games are in the top 100 for revenue. Four of our games are in the top 100 by unit volume even though the prices for them are $3 each or more. If you weed out the really cheap products at 99 cents or free, then you find there are only three companies that can command a price of $3 or more and to rank high enough in the top 100 units sold.

VB: How do your iPhone games fit within the larger strategy?

TH: It’s by far our most effective platform. We make as much money with these games on one device as we do putting a game on 100 different cell phone platforms. Between the iPod Touch and the iPhone, I think the platform is freaking out Sony and Nintendo. Apple has sold 30 million units so far and it has created tremendous awareness. It has taken ground all over the world. But it has only penetrated one half of one percent of its total market.

VB: What do you think of all the other mobile app stores coming on other platforms?

TH: It’s just like with the Mac and the PC. The clones are coming. Device makers, chip companies, software companies and others are getting into the act. We may experiment with putting games on those new app stores, but the urgency now is to put games on the iPhone. One of Apple’s really big advantages is iTunes. They’ve spent years building up those iTunes accounts and it’s much easier for the money to flow.

One question facing Apple is whether it should remain tethered to the PC or the Mac. You can’t use an iPhone unless you download things via the computer. If you want to upgrade your system software, you have to do that on the computer. That’s a major reason why they don’t do well in Japan, where they don’t care about the computer. A large percentage of the world market won’t ever have a computer. Apple needs a plan for that. Another big question: Apple refused to license the Mac in its early years and ultimately lived to regret it. Will Apple license the iPhone to others now? 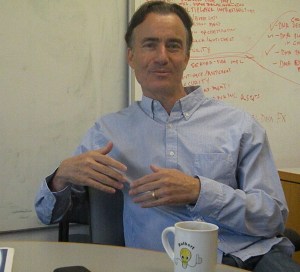 VB: Research In Motion has launched its BlackBerry app store. What kind of opportunity is that?

It’s not so hard to dump an entire library of games on another platform that supports Java. Everybody else is a couple of years behind Apple. The genius of the iPhone is the multi-touch display, which lets you not only touch but swoosh your finger across the screen. No one has duplicated it yet.

TH: That’s a daunting question. We notice that brands don’t do that well on the iPhone, nor do generic games like poker or bowling. A lot of brands aren’t going to cut it. I’d expect that original titles that are built for the platform will become the new brands on the iPhone. It’s like the birth of the web. People thought Disney and NBC would dominate the web. That didn’t turn out to be true. It’s a new medium dominated by new brands.

VB: What was unique about your iPhone games? 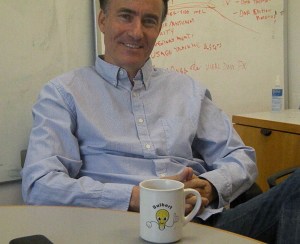 TH: We worked on a memory management technology that made the games work better. Our games were from our back catalog of previously published titles. They were tailored for the iPhone. We had to design it for one-button play and a swiping/touch or tilting mechanic. The platform can finally keep up with the things that you want to do. It reminds me of the Sega Genesis, when EA finally had a platform that could keep up with the games we wanted to make.

VB: Why are gamers playing more on the iPhone?

TH: The hardcore gamer plays to win a game. The omni gamer, who consumes media on all platforms, is playing to make social connections. They’re playing because it’s fashionable and cool and it’s fun to show your friends what you’re doing. There is no way you can have multiple top hits on the iPhone unless you have viral spreading going on. Your products have to be conversation starters. A lot of downloads that happen do so because a friend recommended it. You’re not going to tell your friends about a game unless it’s original and high quality. 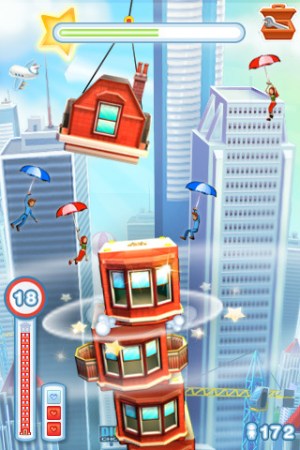 VB: Do you publish your top sellers only on the iPhone?

TH: No. The first ones that published were the ones that finished first. None of them were monster hits on other platforms. One exception: Tower Bloxx was a big hit on the web and on Facebook. The challenge on the iPhone was that it had to get discovered. We did a version that took advantage of the tilting feature.

VB: What do you like about the iPhone 3.0 software update coming?

TH: It’s very exciting. They are adding additional billing models like virtual goods. It’s a step in the right direction. Now they have to deal with tougher security problems related to virtual goods like credit card fraud. But we’re excited about push notifications inside apps. You can do voice chatting, peer-to-peer WiFi, and streaming.

TH: They may have a hard time scaling up. We have cross-platform agility. We’ve got games that have proven successful on a variety of platforms. Few software companies have shown that agility, being successful on more than one major platform. We can take the games to social networks or mobile phones or put it on the web as a casual game. Technologically, we can do that without starting over on the game. We have studios worldwide and so we can make games at lower costs. They’re starting from scratch on technology and costs. Omni gamers will expect that any platform they have will have the content they want or the content they have already paid for.