Rumors are pouring out hot and heavy for Nintendo’s next-generation console, dubbed the Wii 2. A week ago, sources told journalists that Nintendo would announce this new console at the E3 trade show in Los Angeles in early June.

Rumors have come and gone over the years about a new console. Nintendo constantly designs new prototypes but usually postpones the introduction of a new machine until it really needs to introduce one. But Wii sales are finally falling, and so that gives these rumors more credence. The emergence of new details shows that something is in the works.

Game Informer said that the new console (which may be code-named Project Cafe and would replace the Wii from 2006, would debut in the fall of 2012 and would support high-definition TV screens. Now new details suggest the controller will have a touchscreen, two analog sticks and a camera, according to Kotaku. Destructoid ran the picture of the prototype below. 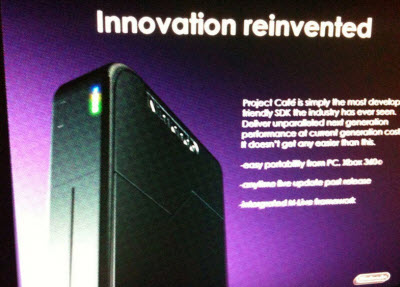 IGN said separately that the new Wii will launch this October or November for $350 to $400. Foxconn will make the device, but it’s possible it may be released in early 2012. The console will  have an Advanced Micro Devices R700 graphics processor that will be more powerful than the PlayStation 3’s five-year-old Nvidia chip. It will also likely have an IBM microprocessor with a three-core design much like the Xbox 360 microprocessor. But the IBM cores will run at faster clock speeds, and the system will support both stereoscopic 3D and 1080p high-definition resolution. The system will likely be as big as the original Xbox 360.