Best known for its standalone hand-tracking accessory, Leap Motion announced today that it’s bringing gesture controls into an inexpensive augmented reality headset, hoping to kickstart widespread interest in AR. The company claims that the headset will cost less than $100 to produce at scale, despite having “technical specifications of a pair of augmented glasses from the future” and using “components from the next generation of VR systems.”

Dubbed Project North Star, the headset consists of two “ultra-bright, low-persistence” 1600 x 1440 translucent displays running at 120 frames per second, plus the company’s hand-tracking sensor. Collectively, the device promises to let users see virtual interface elements through an over 100-degree field of view in the screens, while tracking hand and finger movements in a wider 180-degree area.

While the headset looks large and awkward, it doesn’t appear to be as radically overengineered as recently revealed prototypes of Microsoft’s HoloLens, which looked as if the company was mounting an entire optometrist’s station on users’ heads. For both companies, the future challenge isn’t as much in identifying the necessary technologies for an AR headset as finding ways to fit everything into products people would want to wear. Google famously struggled with Glass, an early AR wearable, as users were referred to by pejorative names and occasionally assaulted. 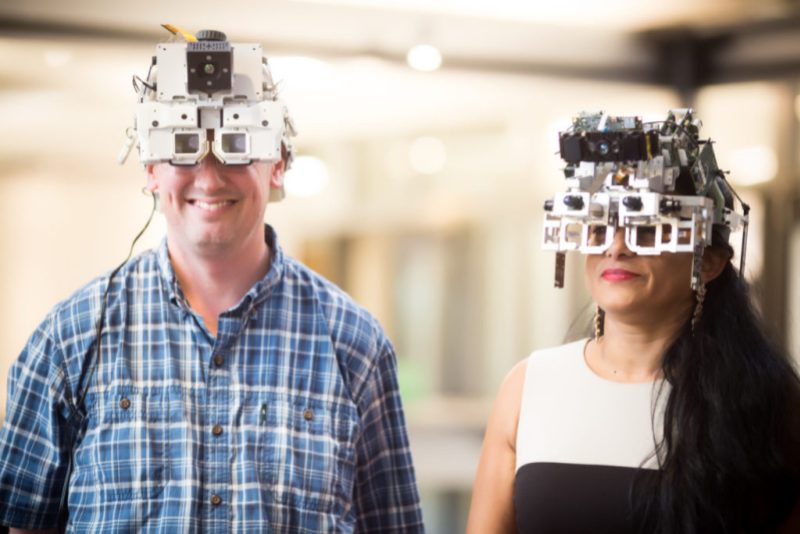 Leap Motion’s design appears to be targeted at early AR developers. Video clips show the North Star system accurately and quickly tracking the motion of an entire hand and all of its joints, as well as allowing standalone digital objects to be manipulated in 3D. Another clip shows user interface “tabs” remaining attached to moving limbs. It’s expected that a connected PC will create all of the visual elements to be displayed on North Star’s screens.

“North Star is a full augmented reality platform that allows us to chart and sail the waters of a new world, where the digital and physical substrates exist as a single fluid experience,” said Leap Motion CTO David Holz. Rather than selling the product itself, the company plans to make both the hardware and related software open source next week, in an effort to spur further development by others. “We hope that these designs will inspire a new generation of experimental AR systems that will shift the conversation from what an AR system should look like, to what an AR experience should feel like.”