Editor’s note: Brian is tired of seeing eye candy getting more clicks on game sites than talented female game journalists. Does the enthusiast press have a sexism problem? Or is it the audience that’s sexist? -Jason

Recently, I came across a disturbing statement directed toward a female game journalist. I won’t mention who initiated this attack or which woman was the victim of this cruel statement, but it bothered me enough to write about an issue that has long concerned me: the portrayal and treatment of women in game journalism.

A female game journalist’s response to this derogatory comment regarding her appearance reminded me of the scrutiny females are under in this medium. I’m no feminist, and I’ve probably even made the occasional sexist remark, but it disturbs me that female game journalists are often valued more for their looks than their knowledge of games and ability to write.

The field has exceptions of course — Bitmob, EGM, 1UP, Gamasutra, Gamespot, and GamePro have all had a number of valued female staff and freelance writers — but sadly, a number of other outlets who use “attractive” females to capture the attention of teenage males. Don’t get me wrong — I’m not against women who wear lots of makeup and show off their silicone, but when outlets use women solely for their appearance instead of their knowledge, things have gone too far. 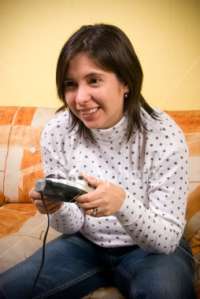 If I was an intelligent female that worked for a video game publication, I’d feel insulted when women that only have a teaspoon of my knowledge get in front of a camera with a low-cut shirt and pretend to know about video games. Women who actually care about video games are the ones who truly deserve respect since they obtained their position with their brainpower and unique contributions they’ve brought to the game industry.

I find it especially annoying that these women are typically ignored in favor of bimbos since they overcame so many hardships to obtain their dream career. As someone who’s been stereotyped for my interest in video games the majority of my life, I can understand how hard it must have been for many of these women to enter a field they were probably told was “just for boys.” Even before beginning their writing careers, many of these journalists were probably ridiculed for their interest in games — especially if they weren’t fortunate enough to be prom queens.

Even with the past behind them, it must be incredibly insulting to get on a video feature and then get bashed in the comments section for not sharing Brittney Spears’ plastic-like exterior. If certain readers of game sites don’t find a particular journalist attractive, they should keep it to themselves instead of making an insulting comment that could keep female game gurus from feeling comfortable on camera.

Besides, if these guys frequent game sites in the hopes of seeing breasts for the first time, their lives would be better spent opening a Playboy or going to one of the trillions of websites designed to meet their needs. Oh, and just for the record, I think these juvenile posters are upset because they could never get a quality female game journalist to even talk to them.

I didn’t write this article in the hopes of creating a female fan base — I’m just tired of the female “game journalists” who like to model naked getting all of the attention. The enthusiast press features number of talented female game journalists who create thought-provoking articles, so it irritates me when they’re ignored in favor of camera-whores who treat their game consoles like sex toys.

How do we resolve this problem? By recognizing the contributions of passionate female game writers and ignoring women who seem like they’d be more at home in a wet T-shirt contest.