LOS ANGELES — I made mine Marvel for decades growing up, so I’m all about the crazy team-ups taking up on intergalactic world-ending threats. That said, it’s entirely possible I’m not the guy TT Games made Lego: Marvel Super Heroes for. The controls feel too loose to me, the action too haphazard, the puzzles too simple yet stringent.

But my kids’ll love it.

And it has to be said, I found enough moments in both my hands-off and hands-on demos to fire up the geek center of my brain. I didn’t get to wander Lego Marvel Super Heroes’ (releasing later this year on Xbox 360, PlayStation 3, Wii U, PC, Nintendo 3DS and DS, and PlayStation Vita) open-world re-creation of Marvel’s Manhattan Island (creatively fudged to include both the X-Mansion and the Raft’s high-security superprison), but a detour out to Asgard did whet my appetite.

“We had a huge list,” says game director Arthur Parsons. “What characters we wanted, what locations we wanted. That’s where we started working closely with Marvel to write an original story that could mix all those places and characters together.” 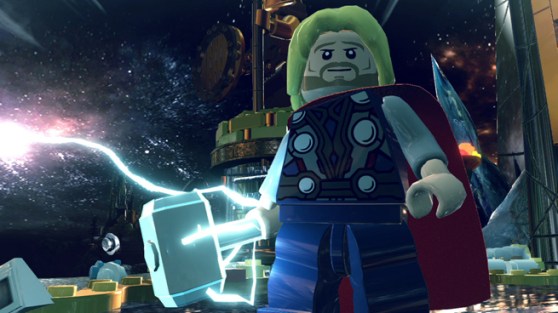 The hands-off mission hooked up four of the 100 playable heroes — Thor, the Human Torch, Wolverine, and Captain America — for an assault on Asgard to shut the Casket of Ancient Winters … and shut down Loki. That might sound like a random fanboy-fueled gathering, but each character filled a mission-critical role. Thor provided muscle and minion-clearing lightning strikes. Cap handled defense. The Torch melted the ice blocking their way. And when Loki’s illusions created dozens of fake Lokis, Wolverine’s enhanced senses sniffed out the real one so everyone could pound on the God of Lies.

The plot involves tracking down the shattered remains of the Silver Surfer’s board, but Parsons makes it sound like the real fun happens when you cut loose and roam around the open world on your own. “We’re doing some crazy stuff, like driving around on Deadpool’s Vespa,” he says.

The SHIELD Helicarrier serves as your hub. Getting down to the street-level action is easy; find an edge, and jump off. Characters that can’t fly may parachute in, so the player can drop into any part of Manhattan they want. Once there, you’ll have your hands full with all manner of superheroics and a heaping helping of optional tasks. “A side mission could be going by the Daily Bugle and completing some quests for the editor,” says Parsons. “You have to go to the Baxter Building and do a cleanup operation because, as part of the story, it gets absolutely trashed.” 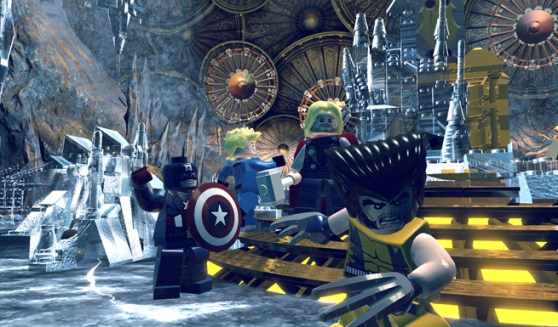 That’s not tough to imagine. The hands-on mission pitted Spider-Man, Iron Man, and the Hulk against a powered-up Sandman who’d turned a natural history museum — and much of the surrounding city — into a desert.

No lie: Hulk-smashing a street jammed with cars goes pretty well, and transforming him back to puny Bruce Banner comes with a very amusing animation. Beating my way through waves of minions felt less satisfying thanks to iffy targeting and a general sense of anticlimax. The goons don’t really do anything but run at you and punch when they get there. They’re hurdles, not enemies.

As always in a Lego game, you can zip between different characters to take their abilities for a spin, something that becomes mandatory when you start taking on the puzzles. Flying around as Iron Man, I felt locked into a 2D field instead of doing whatever I wanted, and one puzzle forced me to transform into Banner in order to climb a chain up to a platform and flip a switch. The Hulk apparently wasn’t able to jump up there for reasons that stretch the very concept of physics (as they appear in most comic books, anyway). 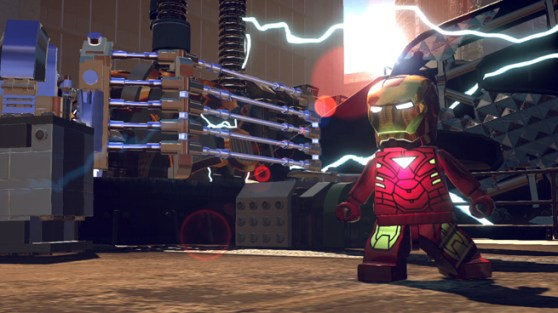 Indeed, the entire end-boss fight with Sandy, swirling around in giant Lego-sandstorm mode, felt like it patiently waited around for me to figure out where on the stage it wanted me to go, with which character, to flip which switch. At one point, I just let go of the controls to see what might happen. Nothing much, as it turned out.

That’s all a bit too gentle for me. At least I know it’s not going to mash my sons into the pavement when they pick up the controls.

Lego: Marvel Super Heroes shows all the same clever touches others in the Lego series do, and it throws around plenty of age-appropriate gags that grown-up Marvelites like me will dig — Thor notes Loki’s fondness for hats with big horns at one point. The team mixes so far throw out a lot of options and fan service at the same time. But this small and entirely fixed segment of the Marvel Universe isn’t enough to really render judgment. I need to untether and spin around Manhattan on a Vespa, getting into any kind of trouble I can find. I can’t help but suspect that’s when the game truly comes alive.