I used to enjoy the Lego video games, but I checked out of the series years ago. After seeing a live gameplay demo of Lego Star Wars: The Skywalker Saga earlier this week at the Electronic Entertainment Expo (E3) in Los Angeles, I’m ready to come back to the digital world of Lego.

The Skywalker Saga is coming to PlayStation 4, Xbox One, Switch, and PC in 2020. It will retell the stories of all nine of the episodic Star Wars movies, including the unreleased Episode IX: The Rise of Skywalker. Most of these films have already had Lego game adaptations. In fact, 2005’s Lego Star Wars (which adapted the prequel trilogy) set the format that most Lego games have been following since. You walk through Lego-made recreations of the classic stories, smashing everything you can and taking advantage of each character’s unique abilities to solve puzzles. For example, you may need a Force-user like Anakin Skywalker to construct a bridge out of a pile of loose bricks.

Even though most of the Star Wars films — all but The Last Jedi and The Rise of Skywalker — have already been in a Lego game, The Skywalker Saga is creating something new. It is not a collection of past games. When you play through this title’s version of The Phantom Menace, it will be a new take than what you played in the original Lego Star Wars.

This gives developer Traveller’s Tales a chance to update the Lego video game experience in some appealing ways. The experience feels a lot a bigger. As you play through the movies, you actually unlock planets. You can then use your ship, the Millennium Falcon in the demo, to visit these iconic worlds from the films. In the demo I saw, the player visited Tatooine. He didn’t just right into some kind of story mission. Instead, he was able to run around and explore familiar locations like the moisture farm that Luke Skywalker grew up in. From there, you can visit places for story missions, like Jabba’s Palace. But these open-world hubs themselves look fun to play around in.

This new Lego Star Wars has great visual touches that help make it look a bit more special. All of the character are still made out of Legos, including the mammoth-like Bantha. But you can see sand on legs, making him feel more a part of the world. 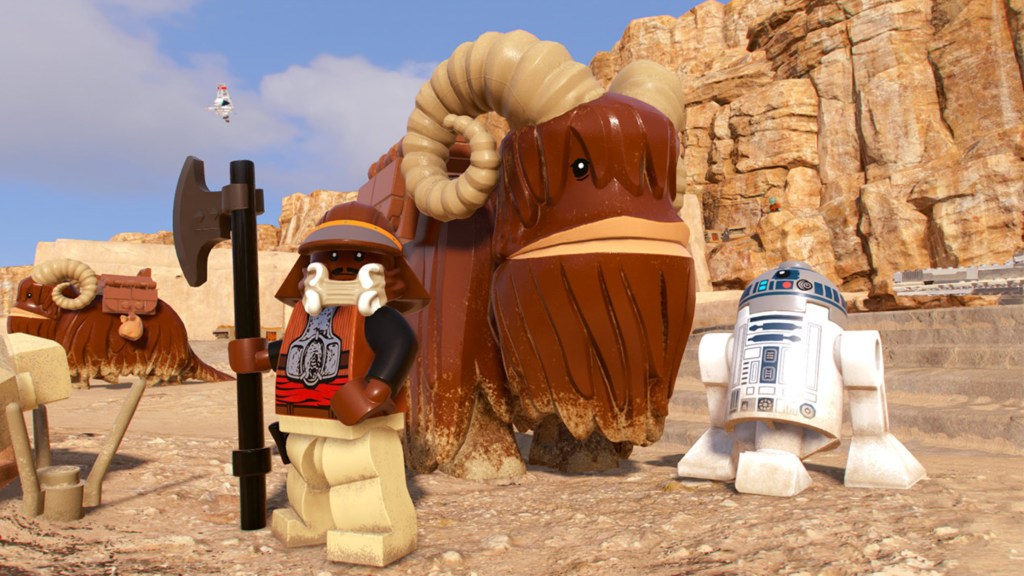 The gameplay is also getting some nice upgrades. Melee fighting, such as with lightsabers, gives you access to combos, so brawling doesn’t have to be the monotonous single-button-mashing affair it is in most Lego games (although the Traveller’s Tale developer narrating demo did say that that strategy would still work fine if you’re a inexperienced player). If you prefer blasters, you can now aim down the sights of your gun like in a third-person shooter.

The Force powers are also more complex. You can pick up individual objects — more than one at a time, if you want — and move them around with your telekinesis powers. This looks a lot more engaging than in past games, where the extent of your Force abilities was usually limited to holding a button next to a glowing pile of bricks until the game built something for you.

I like Star Wars, and I like Lego. I just had grown tired of the Lego gaming formula. Now that I know Traveller’s Tales is working on something this ambitious, I’m excited.