[Updated] Leisure Suit Larry’s new owner Replay Games is exploring its legal options now and says it wants Wisecrack Games today to shut down its $500,000 Kickstarter crowdfunding project because it infringes on their copyright and misrepresents Lowe’s participation in the project. 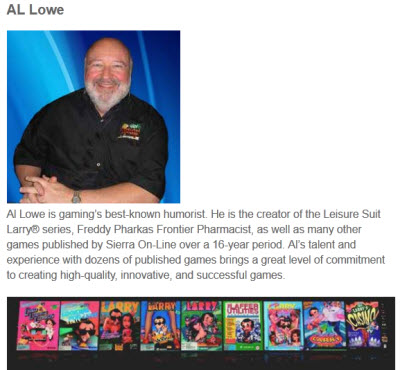 Chicago-based Wisecrack Games just started a project to raise $500,000 to create Sam Suede in Undercover Exposure. The game is a “comic adventure for the 21st century.” Like Leisure Suit Larry, it’s a sex farce. Ken Wegrzyn describes the game is a new one based on an original design that he suggested to Al Lowe years ago.

Wegrzyn and Al Lowe, the original creator of Leisure Suit Larry who is now working with Replay Games, worked on the Sam Suede game about seven years ago. The idea is take a new character, Sam Suede, who is an amateur detective “who navigates the law, investigating suspects, criminals and the ladies.” The game pitch video shows Lowe’s picture several times as it mentions his work on the title and it also shows him as one of the partners working on the project, alongside Wegrzyn and Steve Ince.

“I think the blatant misuse of the Leisure Suit Larry name and copyrighted material shows clear disregard for copyright law,” Trowe said. “To piggyback on someone else’s success is not only rude but also illegal. Those who continue with this will be pursued to the fullest extent of the law. We are suing today.”

Complicating this case is the fact that Lowe did work on the game years ago. But when the team shifted to making a higher resolution game on the Xbox 360 and the PlayStation 3, they couldn’t raise the money to do it. Lowe left to work on his own title with Replay Games. Trowe said he plans to file a lawsuit today in Austin, Texas.

In a statement, Wisecrack Games said, “Wisecrack Games has not infringed or otherwise violated any rights of Replay Games. Wisecrack’s references to Al Lowe’s accomplishments, including his work on the Leisure Suit Larry series, are truthful, come directly from Mr. Lowe’s website with his permission pursuant to a written agreement, and constitute de minimis and fair uses under applicable law.”

The company added, “Based on records of the U.S. Patent and Trademark Office and the U.S. Copyright Office, Replay Games owns neither the trademark nor copyright to Leisure Suit Larry, so any claim on Replay’s behalf is entirely baseless. As Kickstarter fans are aware, Al is currently working on Leisure Suit Larry. The references to Al Lowe’s extensive work with Ken Wegrzyn on the design of Sam Suede in Undercover Exposure is truthfully stated and a historical fact. The original design and prototyping have been completed by Al and Ken, as well as a written agreement with Al Lowe for the Sam Suede in Undercover Exposure Kickstarter with Wisecrack Games. Upon completion of a successful Kickstarter campaign, Wisecrack Games moves into full production to complete the game.”

In an update, Lowe said in a statement: “I am not involved in any way with Wisecrack’s current production of Sam Suede. I am proud of the work I did on Sam back in 2006. When I left, the game’s design was nearly complete, but the text, where the humor lies, was barely started. I am not personally involved in any legal action against Wisecrack and wish them well implementing my game design without me.”

He added, “As far I know, Replay Games is consulting with Codemasters about what action to take against Wisecrack concerning any Leisure Suit Larry usage, to which Replay has the rights. Right now they’re discussing a cease and desist order but it may go further than that if Wisecrack does not comply and remove any confusion as to my current non-involvement in their project.”