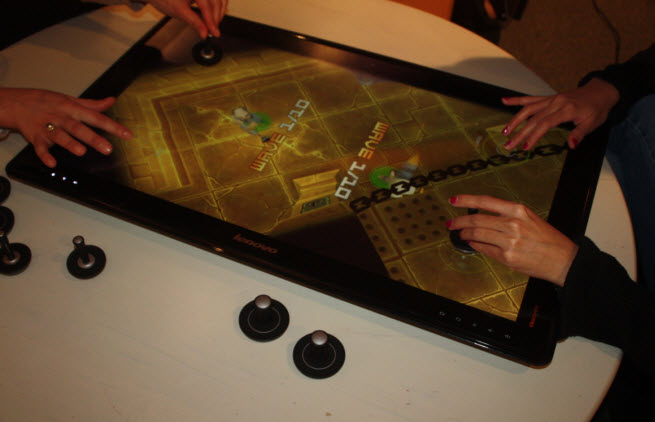 Microsoft’s Windows 8 touch-screen operating system was intended to inspire new kinds of computers. Lenovo has pushed the creative limits with its IdeaCentre Horizon Table PC, filling the system with games from French developer Ubisoft. The result is a novel gaming machine that mimics the play style of familiar cardboard-based board games that families enjoy.

Lenovo (the world’s largest PC maker) and Ubisoft (the maker of Assassin’s Creed) are preloading touch-oriented games such as Air Hockey on the Table PC, an all-in-one Windows 8 computer that has a beautiful 27-inch touch screen. As you can see from the picture above and the video below, two people can play a touch-screen game using little joysticks that Lenovo will package with the system. It’s launching the Table PC at the Consumer Electronics Show in Las Vegas.

“We think this will offer a new kind of entertainment for families,” Deepa Kumar, the director of global marketing at Lenovo, told GamesBeat. “We say this is part of the PC-plus era. We want to transform the computing experience, making it better for social interaction.”

Not every game is going to work well on such a system. But the companies have the right idea in creating content that takes advantage of the big touch screen. The machine also includes BlueStacks technology, which makes it easy to import Android apps so that they can be played on a PC. That will add a lot of variety in terms of game choices. This is the kind of technology that will give the Windows 8 PC a fighting chance against smartphones and tablets.

The machine can tilt 90 degrees, so you can use it as a desktop computer. It is 27 millimeters thick and weighs 18 pounds. Lenovo believes it will work well with a stand on rollers in a classroom. It also has an Intel Core i7 processor and graphics from Nvidia.

Lenovo will preinstall Ubisoft’s DrawRace 2: Racing Evolved, King of Opera, and Raiding Company on the system. Since Windows 8 can recognize 10 finger touches at a time, the Table PC is ideal for two-player games, but more people can join in so long as they don’t put all their fingers on the table.

I played the machine in a demo at Ubisoft’s offices in San Francisco. I thought an air hockey game demo was a lot of fun, but the screen isn’t perfect at recognizing touches, and it’s easy to get stuck on the glass in the middle of the action. But it’s different and fun — not the same old boring PC game. The system has the potential to deliver new experiences.

“Ubisoft is pleased to be working with Lenovo to offer customized digital content that brings to life the unique capabilities of the Horizon Table PC,” said Carrie Tice, the senior director of strategic sales and partnerships at Ubisoft. “The games exploit the unique multiplayer experiences and will bring together family and friends for endless fun.”

Developed by Ubisoft’s RedLynx studio in association with Tuokio, the games have been designed to take advantage of the Table PC’s gigantic screen.

“The Horizon Table PC features a 27-inch screen, which is ideal for creating a truly social gaming experience and is the way the games were designed to be played,” said Tero Virtala, the managing director at RedLynx. “We know that playing together with family and friends around the table with these games creates really memorable moments.”

In DrawRace 2: Racing Evolved, you use one finger to trace a path for a race car on a track, viewed from above. Once you trace your path, other players do the same. Then, the game shows the results of your intentions as cars race along the paths at the same time.

In King of Opera, you push and shove to become the star of the opera who gets all the attention in the spotlight. And in Raiding Company, you defend yourself from attackers using a couple of joysticks.

The system will be available in the second half of the year. Lenovo rules about 15.6 percent of the global PC market, according to market researcher IDC. That gives the company a No. 1 global rank, and it is up from 13 percent last year. With this new machine, Lenovo is going after the family entertainment PC market, said Kumar.

Check out the Table PC in action in the video below.