Lenovo’s Mirage Camera, a portable VR-ready video camera with twin lenses and 4K recording capabilities, has finally received a firm price and release date. Originally announced in January, it will arrive on May 4, 2018 at a $300 suggested retail price. Preorders are now available on Amazon.

The white plastic Mirage Camera is roughly the size of a typical smartphone, but fully devoted to 4K 3D video recording. Its front sports two 13-megapixel fisheye cameras, collectively offering a 180 by 180-degree field of capture and automatic image stabilization. The body has only three buttons: power, shutter, and function, the latter toggling between photo, video, and live broadcasting modes. 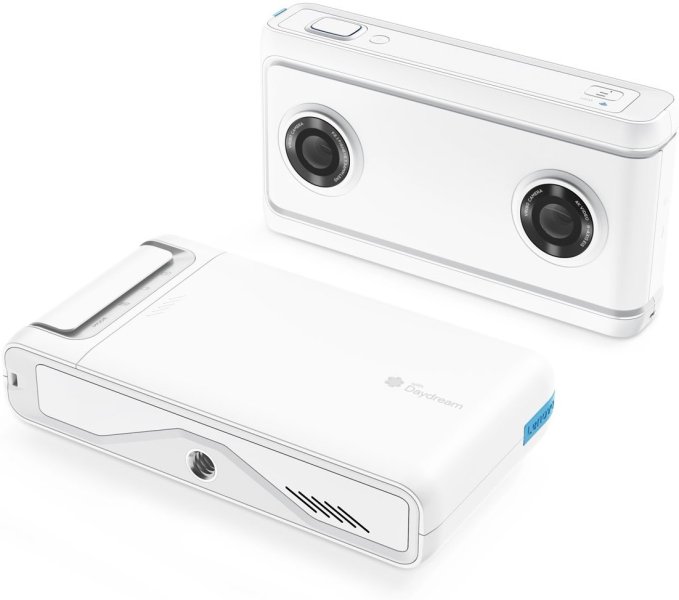 While there’s a tripod mount point on the bottom and 16GB of storage capacity inside — plus a micro SD slot for expansion — the Mirage Camera doesn’t have a screen. Instead, the twin cameras just start and stop recording when you press a button, and if you want to preview the video, you can watch it through your phone’s screen using a Wi-Fi connection. Wi-Fi can also be used to stream recorded content to your phone or to Lenovo’s standalone VR headset, the Mirage Solo with Daydream.

The Mirage Camera automatically creates 3D videos in Google’s VR180 format, capable of being viewed in VR using Google Daydream or in 2D using YouTube and Google Photos. While the videos will be recorded in 4K, they will stream from the camera in either 4K, 1440p, or 1080p, depending on the available Wi-Fi bandwidth.

Lenovo will ship each Mirage Camera with a power adapter, USB-C cable, two batteries, and a carrying pouch; users can expect two hours of continuous video recording per charge. Additionally, a cellular-capable version called the Lenovo Mirage Camera LTE is planned for sale in “select markets,” with price and date yet to be announced.