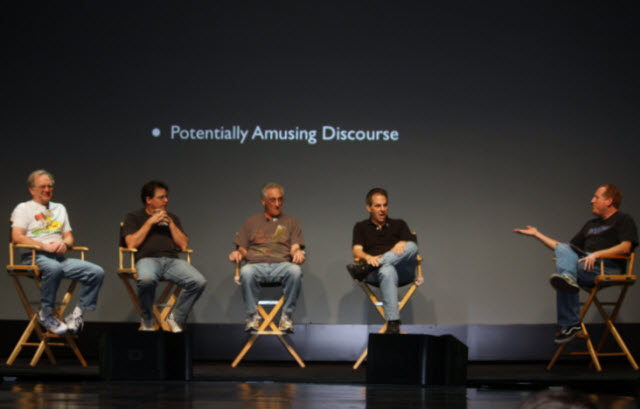 According to the creators of legendary hits like Battlezone, Asteroids, and Centipede, the iPhone is a whole lot like the old arcades of the 1970s and 1980s.

Game-makers are learning lessons from the history of the arcades and using them for today’s designs. That thinking is driving Innovative Leisure, a startup that is pulling the veterans into a kind of reunion company headed by Seamus Blackley (pictured far right and at bottom) and Van Burnham. The makers of classic Atari games like Asteroids, Missile Command, Battlezone, and Major Havok drew parallels from the new games on the Apple App Store to the old games of the arcades in a panel at the DICE Summit in Las Vegas today. 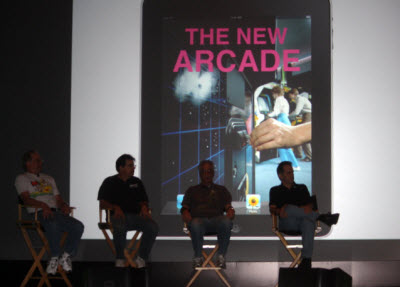 The talk captured wisdom from (left to right) Ed Logg, creator of Asteroids and Centipede; Rich Adam, co-creator of Missile Command; Ed Rotberg, creator of Battlezone; and Owen Rubin, creator of Major Havok. They are all working for Blackley and are paired on new iPhone game projects with students from the game design program at the University of Southern California.

They say original game play is the cure for dealing with the host of hundreds of thousands of competing games in the App Store, just as originality was a way to stand out in the old arcades filled with competing machines.

The new games on the iPhone can take advantage of the computing power of the latest mobile device chips, but they are still starved for memory and resource constrained, just as the arcade machines were.

“We had 256 bytes for memory and 2K bytes for the whole program storage,” said Logg. Rotberg added, “That put limitations on your game. But it forces you to come up with tricks for how to do things without wasting resources. We started the design at the core of the hardware.”

That forces the game designers to be more efficient, and when you create a more efficient game, it has the benefit of being simpler, easier to use, and more broadly appealing to a larger amount of people. Today, the older designers don’t waste system resources as modern programmers sometimes do when they create games with automated programming tools that are available today.

These old guys get a lot of respect today because they created something giant. Asteroids was a staple of restaurants and arcades across the country, selling 70,000 refrigerator-size machines at $2,000 each. And the arcade business boomed from $50 million in in 1978 to $8 billion in 1982, all driven by kids putting quarters into machines when they should have been doing their homework. The demographics of that audience was incredibly wide — kids, boys and girls, and older folks too. 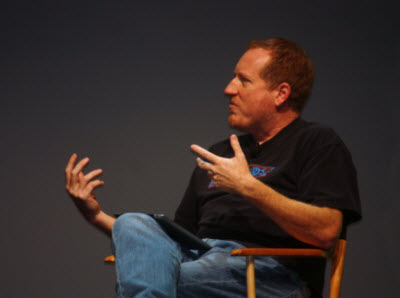 Blackley (pictured right) said that the crash of the arcades in 1982-1984 should be a warning to companies today that are churning out copycat, me-too games that bring no innovation to the table and add to the clutter of the App Store.

“There was a danger period in the history,” Blackley said. “There is a period of novelty, like discovering I can play a game on Facebook. People then develop taste. They want a quality product. Exploitation of franchises and copycats leads them to stop buying. Then you have a crash and put (the games you can’t see) in the landfill.”

In 1982 memo, Adam wrote to his bosses at Atari that licensing games to manufacturers who made bad imitations of them, or “license fever,” was hurting the whole industry.

Logg said that today’s casual iPhone games are refreshing because they are casual and easy to learn. In the old arcades, you had to learn how to play a game in 90 seconds or less, or it just didn’t catch on. Adam said the arcades were cutthroat when it came to competition. If you didn’t collect quarters with it, the machine was quickly replaced in an arcade.

“It had to be immediately accessible,” Adam said. 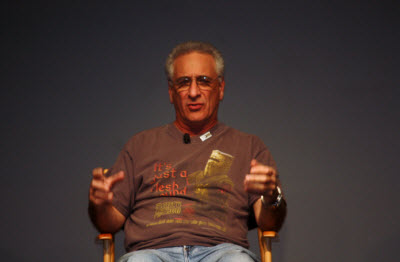 Rotberg observed that today’s development teams are smaller for iPhone games, much like the old days. One difference was that it was easier to test new games in arcades by just watching how people played them. But creating a prototype required a lot of hardware engineering. So the design had to be good at the beginning of that process.

To accomplish that, the old Atari team would collaborate and comment on each other’s games. They were all “engineering jocks” who wanted to share their latest tricks with each other, Adam said. Rotberg said that Rubin constantly bugged him about a volcano in the background of Battlezone. It wasn’t erupting, and Rubin hated that. So one day, Rubin wrote the code to make the volcano erupt and left it as a stack of papers on Rotberg’s chair.

“You get honest feedback,” Adam said.

Today, modern prototyping tools make it easy to create a prototype in software. So game creators should take advantage of that by creating lots of prototypes, playing them over and over, getting feedback, and then iterating on the design until it really works.

“The market was made by small groups with tight design cycles,” Blackley said. “Players will drop it trivially if they don’t like the game, and they will love it a lot and play it over and over if they do like it. We are in this situation again. That’s why these guys want to get back into it.”

Rubin said he is a little sad that people today are discovering old Atari games on the iPad because the controls of the touchscreen device don’t perfectly map to the old hardware controls. Blackley pointed out that the spinning wheel control on Tempest was essentially to the feel of how that game played.

“The touchscreen doesn’t have the same feel,” Adam said. “The feel of a game is just as important as it was 35 years ago. It’s the ego gratification of you being in total control of a complex machine. In our day to day lives, we don’t have much control. Things like traffic. If we can feel control and empowerment over a complex machine that is gratifying.”

Blackley said that modern analytics can tell you a lot about how to tweak a game, but they won’t necessarily tell you how to fix a fundamentally flawed game. Preventing flaws in the first place was one of the outcomes of the collaborative environment at Atari.

Rubin said that he feels that some of the new social games on social networks aren’t really social and that people are too distant these days as they play games.

The audience of 700 game developers and industry professionals responded well to the famous Atari game designers. Randy Pitchford, head of Gearbox Studios (maker of Borderlands) thanked them for their work and said he wouldn’t be there today, were it not for them. So he got up on stage and bowed to them.

“Don’t do this to them,” Blackley joked as Pitchford lay prostrate on the stage.