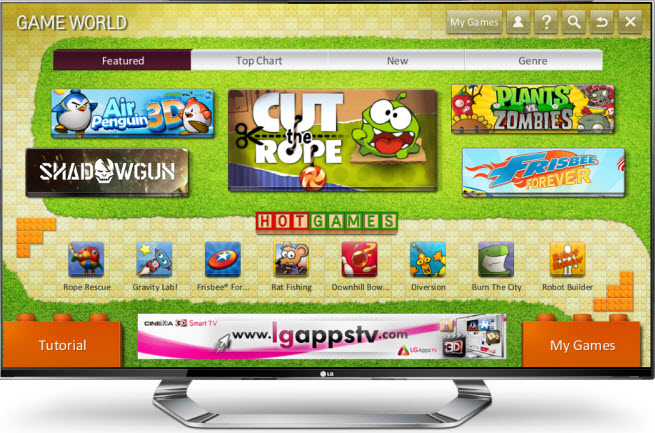 Games drive the success of just about every major new technology platform. Just ask Facebook or Apple. Many electronic companies are starting to adapt to this reality. That’s why LG is announcing today that it has opened its Game World to deliver games as apps on Smart TVs.

Many industry insiders expect that Web-connected TVs are the next major platform for apps, but they will only succeed if they have a lot of games that people want to play. LG is starting with downloadable casual 3D games in its Game World, which will appear on the South Korean giant’s line of Cinema 3D Smart TV series. Game World is a portal that provides a user-friendly way to search for, purchase, and play game apps — in both 2D and 3D — through an intuitive interface, LG says.

Many of the games can be played with LG’s Magic Remote or with any third-party gamepad.

“Game World is a wonderful source of games — especially 3D games — which are suitable for everyone,” said Havis Kwon, the president and CEO of LG Home Entertainment Company. “Many popular titles will be available along with games developed exclusively for LG Cinema 3D Smart TVs. By making the most of the capabilities of LG 3D TVs, Game World will allow us to push the boundaries of 3D gaming and expand the market.”

The main menu prominently displays a menu bar listing four options — Featured, Top Chart, New, and Genre — for quick access to the content. LG will have games in the following categories: action, adventure, arcade, puzzle, role-playing (RPG), shooter, simulation, sports, and strategy. The menu has a tutorial with manuals and instructions for playing with a Magic Remote or a gamepad. The My Games section links users to their library of previously purchased games. Game World will launch globally in the second half of the year.