I’ve always said that giant Irish guys named Liam are hotter than Kim Kardashian or Kate Upton. Now, I have the proof.

The Clash of Clans Super Bowl commercial featuring Liam Neeson talking angrily at his smartphone while waiting for a scone is seriously popular. The video has racked up more than 30 million views on YouTube. That makes it the most viewed Super Bowl ad on Google’s video platform, according to a YouTube blog post. It outperformed a dog whose best friends were a bunch of Budweiser horses. It drew more heat than Kim Kardashian’s T-Mobile data stash. It was more smoldering than swimsuited Kate Upton taking a Game of War milk bath.

Clash of Clans developers Supercell likely spent around $9 million to air the 60-second commercial during one of the biggest television events ever. But the company, which has raked in hundreds of millions of dollars over with its mobile games over the last several years figured that the ad and Liam Neeson were worth the investment. Mobile gaming generated around $25 billion in 2014, according to research firm Newzoo. Having the most popular ad on and beyond Super Bowl Sunday should help Supercell maintain its momentum into 2015.

Check out the ad for yourself:

Of course, the question is: does 30 million YouTube views and a $9 million ad spend turn into app-store success? Well, it looks like it certainly helped.

In late January, days before the Super Bowl, Clash of Clans came in as the No. 38th most downloaded app on iPhone, according to market-tracking firm App Annie. On Feb. 1, the day of the football game, Clash of Clans shot up the charts to No. 29. By Groundhog Day, it was No. 24. 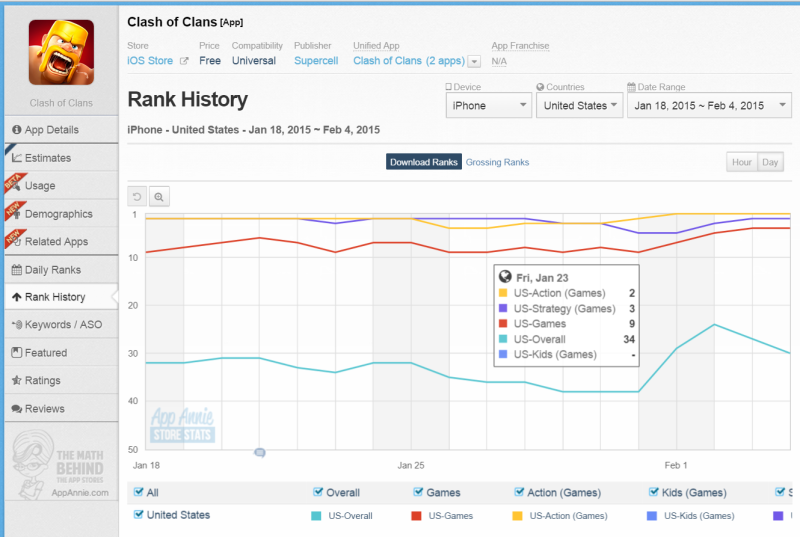 Other gaming-related Super Bowl ads didn’t have the same impact on YouTube.

The Game of War ad starring Upton has 4 million views on YouTube — although it’s closer to 5 million if you include the teaser video as well.