GamesBeat: Will you definitely still make games in some manner, or is complete retirement an option for you?

Bleszinski: I want to be creative in some sort of fashion. I’m a pretty smart designer who has a good sense and a good track record, but unless I’m surrounding myself with my Avengers, I’m useless. I would need a ninja producer. I would need a ninja president for the company. I’d need a ninja lead programmer. All these people who would help supplement what I would want to do. Building that team would not be easy.

The thing is, I would want to get back to the triple-A space eventually, but the last thing I would want to do — and no offense meant to Curt Schilling [38 Studios] and John Romero [Ion Storm] — is to do what those guys did. “Let’s throw 300 bodies at it! Sure, we’ll just make it work!” That’s the equivalent of taking a garage band and having them play Wembley Stadium on day one. You have to learn how to work with people. You find that some people don’t work out and then you get a new drummer, so to speak. You iterate, and you find the voice of the team. It’s very similar to building a sports club or building a rock band.

GamesBeat: Can you see being an indie developer? Maybe a small title, something more experimental, just done with two or three guys?

Bleszinski: Possibly. I think that would be a good way to start. Indie has its strengths, but it also has its weaknesses. It’s a tough area. You’re sleeping under your desk and doing 16-hour days. You sink or swim of your own volition, which is beautiful, but at the same time you’re not getting the Times Square billboards and all that.

I’m not gonna lie. Doing Gears of War, I loved the large-scale aspect of it. We could leverage Microsoft to get the American Chopper TV special and have big launch events and see our ads on TV during Monday Night Football. That level of relevance comes with being triple-A. 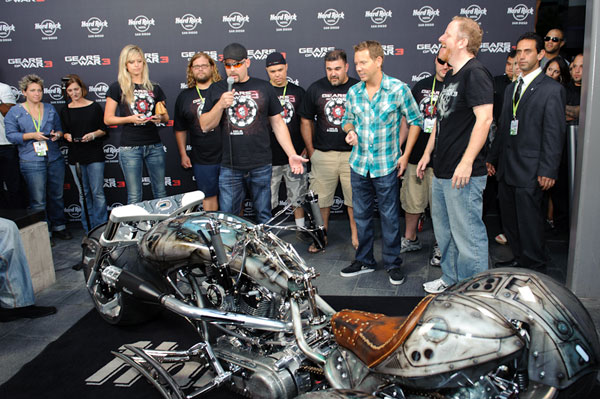 When we started this interview, you were asking me if you’re going to get some sort of exclusive out of me, and all you’re currently getting is a window on the various options that I have. If you look at the state of the industry, the industry’s in a state of massive flux. Do you go triple-A? Do you go indie? Do you go console? Do you go PC? Do you go tablet? Do you go phone? That’s where I am — looking at all of my options.

The beauty of it all is that I can sit back and wait for the dust to settle a little bit over the next year or so, with all the next-generation consoles and everything else coming out, before I make a proper commitment to a possible publishing partner. Considering an Electronic Arts or a Ubisoft to work with … maybe they haven’t mastered the transition into this PC/tablet/free-to-play new world order. Maybe they’ll struggle. Maybe they’ll continue to kill with triple-A on console. I would like to wait and see a little bit longer before I make that bet.

GamesBeat: It sounds like you can afford to wait a bit.

Bleszinski: In the meantime, what I can afford to do is get a small team of contractors on board and start iterating on a few things here and there. Even if I had a publisher tomorrow who said, “Hey, Cliff, here’s $50 million dollars; go make your dream game,” I’d still only ramp up with a handful of people. I’d prototype defined goals and a number of assumptions that I thought would be cool as far as what kind of game I’d want to make. Only until I had something that was actually playable … . Then, once you have that goal, you start dumping amazing talent onto it. Then you start ramping up quickly. But before you do that, if you have a full team, you’re just wasting money.

GamesBeat: It sounds like your heart’s still in triple-A. What happens if, over the next year or two, you wait for this dust to settle, and then you find out that triple-A just isn’t there, and it’s really time for you to start thinking about social or mobile games? Would that be a tough transition for you?