GamesBeat: What are you playing now?

GamesBeat: Anything beyond triple-A?

Bleszinski: I just downloaded the new Slender Man game that came out on iOS. Playing the hell out of Angry Birds: Star Wars on the plane, by the way. That camera needs work. I played a little bit of Bad Piggies. I’m actually watching football.

Bleszinski: Good all-American football. That’s an interesting thing that we should probably touch base about in regards to game design and things like that. I was raised with … football forced down my throat, and I basically rejected it. I didn’t want anything to do with it. It just felt like this sport that the assholes at school played.

Ever since a few years ago, when I watched the Saints in the Super Bowl, something started clicking with me. It’s a fascinating thing. It looks simple, but it’s incredibly deep, which is one of the keys, of course, to football. 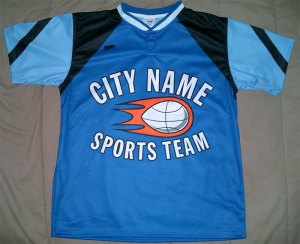 The other thing about football is that it taps into this tribal nature that everybody’s had since the dawn of time. “Fuck those guys! I bleed red!” “Why?” “I don’t know. I was just born here, so fuck those guys!” People go insane for their local teams. I remember the website Something Awful had this joke shirt that said “Local Sports Team” because people just blindly love their local sports team. They want to be part of something. It’s this crazy mob mentality.

That’s something I realized about Gears. At a young age, I wasn’t going to wear somebody else’s logo and do free advertising because I was going to create something with my own logo that people would go buy T-shirts for. People want to be part of a team. It’s the same thing with sci-fi and walking around Comic-Con and seeing all these Crimson Omens everywhere. [Editor’s note: The red skull icon from the Gears of War logo, seen at the start of this article.]

That’s the key to something I want to consider getting more into in the future, which is creating something that creates that local loyalty on a digital scale. You have your North Carolina versus South Carolina or New York versus Jersey. Can you create those rivalries somehow in a digital space that we’re all hardwired to believe in?

Plus, football is just a great excuse to have beer on Sunday.

GamesBeat: So are you into the sport itself, or are you just analyzing this phenomenon?

Bleszinski: For me, it’s two-pronged. It’s enjoying it, appreciating the sport, finding something new I can learn about. I ignored it my entire life. Now I’m watching it and understanding it and seeing all the good plays and whether or not RGIII’s injury is that bad. It’s fascinating to me. So I analyze it not only to appreciate the athletics but to see what these guys go through. Even the side notes, like how their finances pan out, because half of them are done by 32, and they wind up bankrupt two years later. And the politics of whether or not they should have even played RGIII.

Understanding the tribal nature of finally signing up for fantasy football and then realizing that fantasy football is so genius because it gets people to tune in and care about a team that they wouldn’t normally care about — because they have a player on the fucking team that will affect their stats. This has been surgically built over the course of however many years to keep an incredibly loyal fan base behind this trillion-dollar phenomenon. This fascinates me now, the whole idea of pro sports. I wonder what we can learn from that to apply to video gaming somewhere down the line.

I haven’t said that to anybody yet, so you’re getting that exclusive.

GamesBeat: So who’s your team? The Carolina Panthers?

GamesBeat: So no local team for you, then?

Bleszinski: No, not really. I don’t have any geographic adherence. I applaud the local teams when we have March Madness with all of our college basketball teams, but I don’t follow a lot of the pros. I am a big fan of the Hurricanes because the sport I actually liked growing up was hockey. It looks like we’re going to have a little bit of hockey this year, so that’s good.

I like Raleigh. I’d like to stay here. Anything that makes the local economy do well and helps keep us on the map, I’m a fan of that.