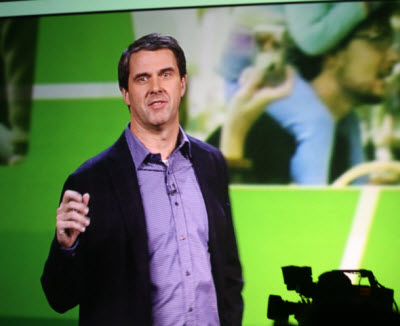 Since the launch of the original Xbox, more than 500 million games have been sold, generating revenues of $20 billion in sales to date.

That number includes the total sold during 2009, which means Microsoft remains behind first place Nintendo, but likely ahead of third place Sony, which said it sold 3.8 million PlayStation 3 consoles during the holidays. Various estimates put Nintendo above 60 million Wii consoles sold, while Sony is now above 30 million Playstation 3s sold. If anything, Microsoft’s new numbers show that it is keeping pace with its rivals.

Robbie Bach, (right) head of the Entertainment & Devices division at Microsoft, said top games coming in 2010 include Mass Effect 2 on Jan. 26 from BioWare/Electronic Arts, Tom Clancy’s Splinter Cell Conviction from Ubisoft, and the psychological thriller Alan Wake from Microsoft and Remedy. Also coming are new installments in Fable, Crackdown and downloadable maps for Modern Warfare 2, exclusively first on the Xbox 360.

The biggest game coming this fall is Halo Reach, the latest in a series that has sold more than 30 million games, 5 million books, 500,000 music CDs, and lots of toys.

Bach said Xbox Live has more than 20 million numbers, which is not a new number Microsoft is launching Game Room titles on Xbox Live and on Windows. You can play those games on either the PC or Xbox Live. The non-game use of the Xbox 360 is going up with things like avatars. Users have created 200 million outfits for their avatars since they were introduced a year ago. About 100 million songs have been downloaded through Xbox Live thanks to games like Guitar Hero. In late 2009, Microsoft launched Twitter and Facebook access on the Xbox 360.