Livestreaming service Streamlabs got caught with its hand in the cookie jar. Lightstream, a competitor to Streamlabs in the live streaming business, took to Twitter with a meme to point out how similar Streamlabs’ new Streamlabs Studio website looks compared to Lightstream’s own.

? Hey, can I copy your homework?

▽ Yeah, just change it up a bit so it’s not obvious you copied.

Console streaming has historically had issues. Some companies block footage as it occurs if you use the internal tools on a PlayStation or Xbox. Other developers try to prevent streaming entirely. On top of that, console streamers have limited options for designing their layout. Professional streaming has often required a capture card to get around these restrictions.

Lightstream offers a browser based streaming solution. Its subscription-based service lets streamers design a layout in their browser. They can then stream from their consoles or PC through it, to live streaming sites.

Streamlabs is best known for their free streaming software Streamlabs OBS. The software allows live streamers to set up and customize their streams, as well as display visual alerts for notifications. Streaming from a console to Streamlabs OBS has mostly required a capture card. The new Streamlabs Studio offers similar functionality to what Lightstream offers, removing the need for extra hardware. It is currently exclusive to Xbox. Streamlabs Studio is also subscription based.

Elgato joined in on the Twitter thread with a meme of its own. 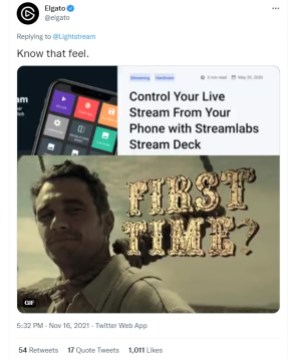 The makers of the popular live streaming tool Stream Deck put together a gif to call attention to the fact that Streamlabs has done this before. Streamlabs launched an app called Streamlabs Deck in 2018, a year after Elgato launched the Stream Deck. Its tweet showed that the Streamlabs website called its app Stream Deck; the name of Elgato’s product. The OBS Project, makers of the original Open Broadcaster Software chimed in as well.

Near the launch of SLOBS, @streamlabs reached out to us about using the OBS name. We kindly asked them not to. They did so anyway and followed up by filing a trademark

We’ve tried to sort this out in private and they have been uncooperative at every turnhttps://t.co/r1eXr3VxcJ

“We made a mistake. Text on the landing page was placeholder text that went into production by error. This is our fault. We removed the text as soon as we found out. Our intended version is now live. Lightstream team is great and we’ve reached out directly to them to apologize.”

While this sort of thing usually isn’t illegal or even worthy of a civil suit, it’s a bad look and something Streamlabs should want to avoid considering it works with people who produce original content. And that’s exactly what is happening.

Since this story originally broke, Streamlabs announced it is dropping the OBS name from its streaming tool.

But even with this backtracking, Streamlabs may have stepped on too many toes. Even Edward Snowden weighed in with a tweet criticizing the platform.

Updated at 8:30 p.m. Pacific: Added a comment from OBS with an explanation of the difference between OBS and Streamlabs OBS.