Lual Mayen is a former refugee who left Africa to become a game developer in the U.S. He has received recognition from The Game Awards and CNN for his mission to make games about peace, and he was a fitting speaker to close our event today.

At the end of GamesBeat and Facebook’s Driving Game Growth event, Facebook game partnerships head Leo Olebe, Mayen, and I spoke about how to get inspiration in the game industry today. The session, “You Can’t Be What You Can’t See,” comes from quote from Marian Wright Edelman, the founder of the Children’s Defense Fund and a civil rights activist who felt that children needed to see role models that inspired them.

Mayen spent the first 22 years of his life as a refugee. His family fled from South Sudan in the country’s civil war and wound up at a refugee camp in Uganda, which happens to be where Olebe’s family is from. Mayen was one of more than 2.5 million displaced by the civil war, which began in 1983. In the refugee camp, Mayen’s mother saved up money for three years to buy a laptop for him, and he used it, among other things, to learn how to play games.

Mayen saw a laptop computer at a registration station for the refugee camp. He told his mother he wanted one. She saved money for three years to get the $300 to buy it for him. When she gave it to him in 2013, he burst into tears. He took it to an internet cafe and used it. And he discovered Grand Theft Auto: Vice City and the joy of playing. He didn’t know how video games were made.

It was a three-hour walk to get to the internet cafe, but he made the journey regularly just to charge his computer and play games. As a child born in a violent war, Mayen thought about how to create a game that could inspire peace. He taught himself to make games and formed his own company, Junub Games. He created a game called Salaam (an Arabic word that means peace) about protecting communities from being destroyed. It was a 10-megabit mobile game, but he could only distribute it via Bluetooth networking.

That put him on the road to become internationally known. The game spread in a viral way. A conference organizer at A Maze discovered it, tracked him down, and asked him to speak at a conference on games in South Africa.

There, Mayen met Rami Ismail, the cofounder of Vlambeer and an  successful game developer. As an ambassador for indies, Ismail encouraged Mayen to pursue his passion of making games. Mayen also made a board game, Wahda, that encourages peaceful conflict resolution. He did so because it did not require a computer to play, so refugees may have a chance to play it.

Ismail paid for certain panelists to come to the Game Developers Conference in San Francisco. But despite an invitation, Mayen wasn’t able to go in 2017 because of President Donald Trump’s immigration restrictions. His visa wasn’t approved in time. But Mayen made it in 2018, and he gave a hell of an inspiring talk.

Later in 2018, Mayen appeared at The Game Awards, where he was named a Global Gaming Citizen in conjunction with an award sponsored by Facebook. (27 million people watched that show.) That event was where Olebe, who has been in the game industry for 20 years, met Mayen. In October, CNN named Mayen one of its “Champions for Change.”

More recently, Mayen started the Lual Mayen Foundation, to empower refugees with technology. And his team is working on making his game, Salaam, available on Facebook as an instant game. Olebe has been one of the people helping Mayen on his journey to publish a globally accessible game about peace.

“Meeting Leo was a great opportunity for me,” Mayen said. “When I was growing up in the refugee camp and then started doing this, I wondered how I can meet the right people who can keep pushing me. It’s a very hard industry. There is so much competition.”

Mayen needed to find people who could connect him with mentors and others who could help him tell his inspiring story through both words and games. 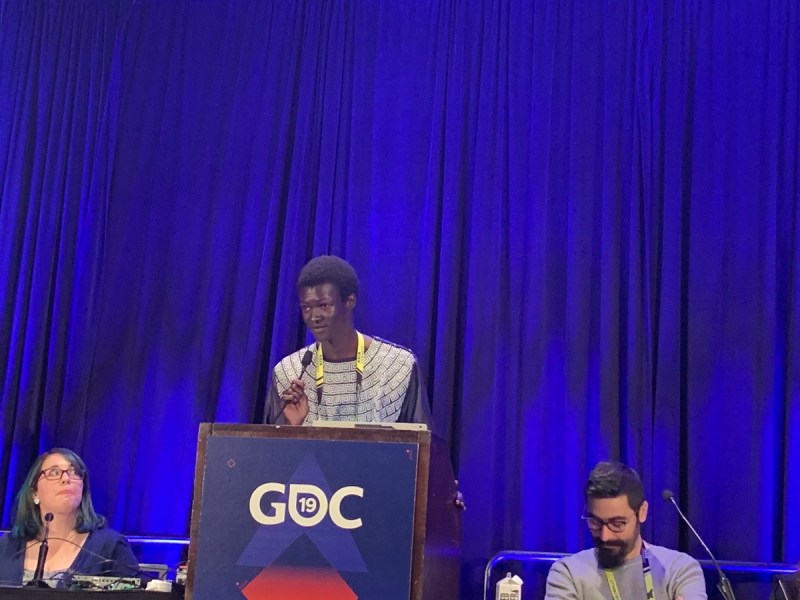 Above: Lual Mayen, maker of Salaam and Wahda, speaking at the GDC in 2019.

In our session, Mayen and Olebe spoke about how to inspire game developers to be their best selves and put proven diversity practices into effect. Olebe said that every time he talks to a passionate developer, that’s what has given him strength, resolve, and resilience.

“We’re in an amazing industry, that’s filled with amazing people, who are ready to tell amazing stories,” Olebe said. “If we are listening, if we are doing the best job we can to listen, then inspiration can’t help but come through. Lual’s story is an incredible example of this.”

Growth itself is inspiring for developers. More than three billion people are connected around the world and most of them are gamers. More people are recognizing games are a great way to have fun during the pandemic.

Mayen said his journey has prepared him for whatever can happen in life. During the pandemic, he said that he connected with the right people who could push him and who have done so much in their lives. He is using the lessons he has learned to create something for other people.

And Mayen said, “People are just beginning to understand the power and to be able to use the medium for something that is very important: changing the world. Having leaders like Leo is important because a lot of people want to do good but don’t know how to do it.”

How to make change

Asked how you change the industry for the better, Mayen said it is important to focus on diversity among game developers so they can tell their own stories because no one else can tell those stories.

Olebe said that people are under the impression that creating good in the world requires an extraordinary effort. It doesn’t take a ton of resources, he said. It simply requires talking to people, whether it’s at industry events or on Zoom calls.

“It’s as simple as giving people a chance to even talk to you,” he said.

Last month, Facebook Gaming committed $10 million over two years to support the Black gaming creator community. This is part of a company-wide commitment to support Black and diverse communities in the U.S.

“This stuff doesn’t have to be hard,” Olebe said. “Just do something. Anybody watching this panel has the ability to create positive change for somebody else.”

I asked Mayen why he is working hard to undertake charitable efforts at the beginning of his career. But he said he spent 22 years in a refugee camp, and that he didn’t start his company to make games and make a career. Rather, he did it for the community.

Asked how he can help people like Mayen, Olebe said, “Let great people do their thing. Lual spent 22 years in a refugee camp and now he has his own game studio and foundation. That’s all Lual. The best I can do is offer to make introductions and then get out of his way. Component No. 1 is not trying to prescribe what greatness looks like, not trying to make a specific mold.”

You should let people shine, Olebe said, and then tap into the resources that you have to help out.

“Everybody has the opportunity to tap into their network to lend that to others,” he said. “Let people be awesome. Give them the opportunity to be awesome. That’s what doesn’t happen. That is the issue in this space. There are people knocking on the door saying I have something cool to share with you. I have this great story to tell you. And the door remains closed. We need to open the door. That’s what the games industry needs to do.”

Olebe said he tries to open doors for people by meeting as many people as he can. He puts himself out there and, while it feels risky, and he said it returns “rewards greater than you can possibly happen.”

He added, “How many lives have we been able to change together, simply from the fact that we met?”