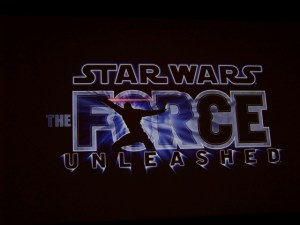 [Editor’s note: This post introduces a new VentureBeat contributing writer, John Gaudiosi, who has over a decade covering the video game industry for a wide variety of outlets. Gaudiosi is in Los Angeles this week for previews of games being announced at the E3 show in L.A. in July.]

LOS ANGELES—LucasArts Entertainment showcased playable versions of its two big titles for 2008, “Star Wars: The Force Unleashed” and Day 1 Studio’s “Fracture,” at a game critics press event in Santa Monica. But it also tipped its hand on the future.

While the company only showed those two titles to game journalists today, it confirmed that two additional Star Wars titles will ship this November based on “Star Wars: The Clone Wars,” the new Warner Bros. computer-generated (CG) animated movie and TNT/Cartoon Network TV series.

While this will come as no surprise to anyone who purchased LucasArts’ “LEGO Indiana Jones: The Original Adventures” game, which features an advertisement for these games on the back manual cover, the names and details are new.

“Star Wars The Clone Wars: Jedi Alliance” on Nintendo DS is the first game developed at the LucasFilm Animation Studio in Singapore, which is where the new Clone Wars TV series is being animated. Krome Studios is behind “Star Wars The Clone Wars: Lightsaber Duels” for the Wii, which will deliver lightsaber battles via the Wii’s remote control. Although Star Wars The Force Unleashed is being released on Wii, Lightsaber Duels marks the first original Star Wars game for Nintendo’s best-selling console. Both of these new Clone Wars games will be playable at E3 and the Comic-Con convention in July, along with The Force Unleashed and Fracture.

A second source close to LucasArts but outside the company confirmed that the layoffs (which are rumored to be between 75 and 100 employees) have not impacted any game development. A third source inside the company confirmed that the original Indiana Jones game, which was first shown at E3 2006, is still moving forward with some of the development team from The Force Unleashed.

In addition, according to alleged leaks from recently laid off employees, LucasArts is currently developing a number of obvious sequels in its Star Wars game franchises. These titles include “Star Wars: Knights of the Old Republic 3,” which is allegedly in co-development at BioWare, and “Star Wars Battlefront 3,” which is rumored to be in development at Free Radical. There’s also supposedly another LEGO Indiana Jones game in the works at TT Games, which makes sense given the back-to-back LEGO Star Wars releases and strong sales and critical acclaim those games earned.

While Grohne wouldn’t comment on any unannounced titles, she did say that E3 won’t be used this year to announce any new games from LucasArts because there’s too much noise surrounding the show.